GO Fest takes us back to the future 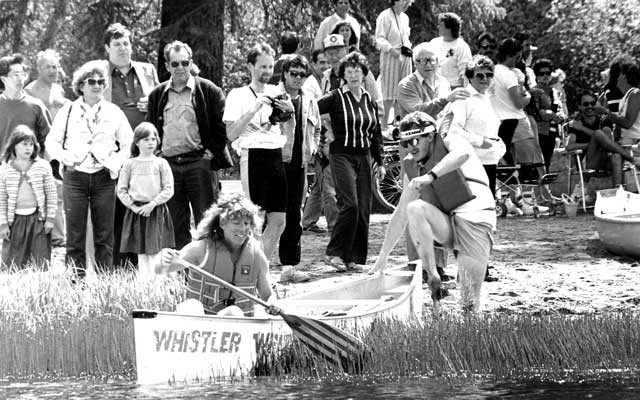 This weekend, in honour of Queen Victoria's birthday — not certain which, or if there was even more than one, but it really doesn't matter any more, does it? — Whistler will be embracing the Great Outdoors with a new, family-friendly festival. Welcome, and be sure to stop by muni hall to pick up your commemorative First Annual GO Fest Certificate of Participation. You deserve it.

The festival in which you are about to take part — or have taken part, depending on when you read this — was created by the collective genius of the Festivals, Events and Animation folk and others too numerous to mention... so I won't, which spares me the effort to find out exactly who they are. Let's just call them the GO Festians and move on.

GO Fest goes boldly where Whistleratics have gone before, which is to say it festifalizes the kind of stuff we do most weekends, week days too, during spring's shoulder season and summer. The key difference is, we're keen on sharing that somewhat bizarre, hyperactive lifestyle with friendly families we hope will flock to the village to (a) be all festive with us and (b) make it both uncomfortable and too expensive for the jerky boys who like to come up from certain southern suburbs of Vancouver during the May long weekend and raise their own peculiar kind of hell.

Since they won't all get the message they're not welcome in time to change their habits, we'll have, in addition to GO Fest, a heightened police presence. Friendly families, this is not because of you. If you were our only festivalizers this weekend, we could police the village stroll with red-nosed clowns. But I digress.

When I say GO Fest celebrates the kind of non-stop fun we live every day, I exaggerate not. Look at the lineup: fly fishing, biking, running, disc golf, ultimate frisbee, sailing, river rafting, drinking, partying, kayaking, skiing, yoga (of course) and patio hanging. And in a back to the future blast, the phoenix-like resurrection of the Great Snow Earth Water Race.

The GSEWR was a mainstay of Whistler culture back in the day when, well, it actually was Whistler culture. Very few people are still alive who remember the GSEWR and most of them suffer such debilitating memory loss they're still anxiously awaiting the release of Jimi Hendrix's next album. We like to think of them as, alternatively, Whistler's pioneers or our aging pet hippies. If you happen to see one this weekend, smile, say "Thanks" and buy them a beer — it's the least you can do.

Anyway, the GSEWR used to be a spring event when our aging pet hippies were but youngster hippies and Blackcomb was just another mountain you could see from Whistler. Festivals not yet having been invented, the GSEWR was pretty much all there was, after which those taking part and those just hanging out watching partied for the rest of the weekend, taking a break to fish, bike, run, etc., but with no particular order or schedule, unlike this weekend.

The GSEWR involved skiing — snowboarding not yet having been invented either — to the point where the snow ended, hauling ass down the rest of the mountain which made Tough Mudder look like a walk through a field of wildflowers, chopping down large trees to construct a raft-like conveyance and making your way down Alta Lake — no mean feat since the only "down" on Alta Lake is any direction from the middle — down the River of Golden Dreams, across Green Lake, down Green River, over Nairn Falls and into Pemberton for an espresso at the Pony.

OK, I was only messin' with the aging pet hippies there. The Water part of the race wasn't nearly that long or arduous, didn't end in Pemberton and that was way before the Pony. But if you buy them a second beer and get them talking, there's no telling how far they'll stretch the truth. Just thought I'd beat them to the punch. Don't say you weren't warned.

The latest GO-festivalized version of the GSEWR embraces both skis and snowboards and since everything is bigger and better in the 21st century, both touring and downhilling because, well, because we, and by we I mean Whistler in general, really wants to be all we can. All things to all people all the time... as long as all doesn't include the thugs and hooligans from those unnamed southern suburbs. And let's face it, you can't just have a simple race in these days of Ironmen and women. You have to RACE!

So GSEWR races on snow, uphill and down, then does a run on mountain bikes through Whistler's bike park. This, as any aging hippie will tell you, is a modern addition. Back in the make-your-own-yogurt day, this wasn't part of the race. That's because (a) mountain bikes hadn't been invented yet, mountains themselves being relatively new, and (b) there was no Whistler Mountain Bike Park to shamelessly promote every chance we get. But I think we can all agree this is a nice addition and if we'd had both those things in the Before Time, they'd have been part of the race. In case you were wondering, this is one of the Earth elements, not that they all aren't.

So is running, although it seems likely this year's running isn't likely to be quite as muddy as the memory-challenged remember it and is likely to involve gear more hi-tech than Bill Russell Converse high tops.

Depending on the heat between now and the weekend, the canoeing down the River of Golden Dreams may or may not be very exciting but it seems like a good bet the two performance-enhancing substances most widely used during the original GSEWR — beer and joints — will still be present, while being simultaneously less visible owing to the heightened police presence.

The race ends with a cross-country bike ride because, well, because we have bikes and country to cross and those are good enough reasons. Had our founding hippie fathers and mothers thought of it at the time, I'm sure they might have included yet another leg in the original GSEWR. But for the most part, by the time the Water leg was finished, so were they and it was time to slip in the Hendrix eight-track, fire up the gaily decorated VW bus and head for the Boot to celebrate what passed for culture before it became something contrived by municipal departments.

So, everyone have a great, family-friendly time this weekend. And in an effort to make this festival a success, if you see any of those undesirable jerky boys loitering around town, point and laugh at them and make them feel as out of place as vegans at a barbeque. They hate that.