Meet the new boss. Same as the old boss. Wednesday morning in budding British Columbia looked, not surprisingly, a lot like Tuesday morning. Grey skies, threat of rain, maybe a cameo walk-on by the sun, same-old, same-old.
May 15, 2009 6:17 AM By: G.D. Maxwell 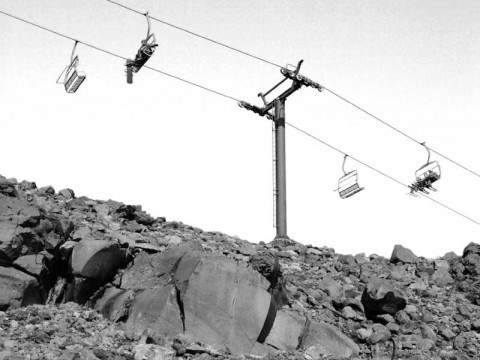 Meet the new boss. Same as the old boss.

Premier Tippler heads back to work with three per cent more legislative seats than he started the week with, the James Gang returns three per cent lighter. Despite the seasonal orgy of growth, there continues to be no apparent greening in Victoria. There are, to be sure, new faces. And despite the apparent lack of popular demand from people around the province who have felt under-represented, nine new bodies will be vying for room at the trough, six representing new ridings carved out of old ridings and three who fill seats left vacant when their former occupants lost interest... or whatever.

And, of course, the 23 per cent of voters in this riding who voted for the Green candidate join the 23 per cent of the voters who voted for the NDP in their quadrennial, symbolic pissing into the wind. B.C. voters chose overwhelmingly to retain the horribly flawed first past the post system as opposed to taking a header on the horribly incomprehensible sexually transmitted vote. Changing the way we vote will always be an uphill battle; changing it to something no one understands isn't a good start. Having proven that twice now, maybe we should be looking elsewhere for the answer.

Around Tiny Town though, change is in the air. Workerbees have been beavering away with powerrakes, powershovels, powerbrooms and powerfertilizer greening up the ol' sustainable place. Several hundred tonnes of winter grit has been powersucked up into big machines, packaged into neat boxes and stored away to be used next year when the snow falls.

B.C. Transit continues its moonscape theme park near Nesters, Rainbow its moonscape neighbourhood near nowhere, the muni its moonscape water project near Rainbow Park and the town partythrowers their fullmoon party near oblivion.

While I've been mooning over spring skiing, spring skiing's been largely absent. Oh, to be sure, it is spring and there is skiing. But with one eye on the snowline earlier this week and the other on the thermometer, one could be forgiven thinking the needle's gotten stuck somewhere in late winter. Until, that is, one actually ventures up the mountain to ski. While long underwear instead of shorts beneath ski pants says winter, the nearly complete absence of fellow travelers cries late spring. I don't know if the MotherCorp will reopen Whistler for skiing on Monday as they've planned. But they can be forgiven if they choose to shutter the ticket windows and await summer's sightseeing throngs. They've got to be oozing red ink as well as the blood of workerbees recently let go.

So, while hope springs eternal - defined by keeping one pair of rock skis every ready for a real spring day - I'm calling quits on this ski season, an act that begs the question: What kind of season was it?

As a ski season, it shared a number of characteristics with the election we just slept through. It seemed to take forever to get here and once it arrived, failed to deliver on our expectations. Long time locals, ever a stoic bunch, feigned indifference when November arrived without snow. "Don't worry," we said, as the month slipped away and we continued to bike and run on dry trails. "Snow always comes," we said with less conviction as we tore the page from the calendar and realized to our horror there were fewer than 25 shopping days 'til Christmas.

"Told ya," we smirked with a deep sense of relief when half-hearted snow finally began to fall and we knew we'd be able to celebrate the opening of the Peak 2 Peak gondola without having to explain to the world press why the riders queuing up for the maiden voyage were wearing shorts and feeding bears. Did that party, going off without a hitch, foreshadow the disaster ahead?

Excalibur broke; how weird was that? It was up again in a week; how weirder was that? The alpine became a new ring of hell and friends died. Fear gripped Tiny Town as we all wondered whether tourists were staying away because the economy was swirling the bowl, because we had no snow or because what we did have was almost immeasurably dangerous. People who thought they had jobs found out they didn't. Businessfolk who had never laid people off experienced personal growth by performing a totally new task. The food bank became the place where locals shopped.

With the exception of a fatal and quickly aborted attempt, the alpine remained out of bounds and spinmeisters spun new ways to try to explain exactly what that meant to ignorant journalists and overly-enthusiastic skiers. Whistler Bowl finally opened to safe skiing on January 24 th . Weary sliders took their time venturing further afield and many backcountry tourers resigned themselves to yo-yoing inbounds.

Ironically, through it all, the tourists who came had a great time. There was lots of sunny, cold weather. Expensive snowmaking continued well into March and the groomers worked with a deft touch to provide what the masses wanted - endless corduroy. Resort visitors commented favourably on the high levels of service and friendliness provided by cheerful staff. They also liked the uncrowded slopes.

As with even the worst ski season, there were memorable days. We were grateful for powder days when they came and we skied laps when they didn't. We may have even gotten used to the novelty of almost never skiing in the rain.

But overall, it was a season where survival was its own success story. There are people we won't see next year, businesses we won't patronize next year, and a yawning unknown lying just over the horizon, obscured by the five-ring monster coming to town.

Want a number for this season? Pick any one you want as long as it isn't bigger than four. Beyond that, you're just deluding yourself. This was the kind of season I'm glad to see go and hope to never see again.

Doesn't mean this still isn't the best place in the world to be though.