Even if it were held somewhere within the borders of our neighbour to the south — Washington state — and let us give thanks it isn't, the World Ski and Snowboard Festival would be old enough to legally drink this year.
Apr 6, 2016 6:00 PM By: G.D. Maxwell 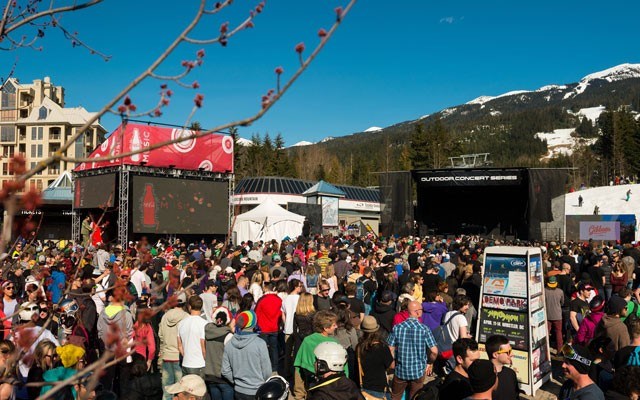 Even if it were held somewhere within the borders of our neighbour to the south — Washington state — and let us give thanks it isn't, the World Ski and Snowboard Festival would be old enough to legally drink this year. That's right; the 21st instalment of WSSF — uncannily pronounced like the sound of a lisping, asthmatic pug dog trying to bark with its mouth full — rolls into town this Friday for 10 days of non-stop merrymaking, mountain kulture celebrating and so many things best left unsaid.

But before I continue — and continue I shall — I would like to bring up a subject of grave concern... to me at least. Easter. You heard right. Easter.

Easter is the ultimate moveable feast. It can fall on any Sunday, according to the orthodoxy of western Christianity, between March 22 and April 25. This year it fell, as did snow, on March 27. I won't get into the arcane lunisolar rules around nailing down the date of Easter — oops. But the coincidence of Easter and WSSF in, say, mid April has, in past years, also engineered the coincidence of WSSF still being in full swing on April 20, or, in more common vernacular, 4/20, nudge-nudge, wink-wink.

This has led to a growing laissez faire approach to a certain illegal, albeit enjoyable, activity — not to mention one Prime Minister Selfie has vowed to make legal — taking place at more or less precisely 20 minutes after four pm at the WSSF Main Stage, which in past years has coincidentally featured a reggae band, mon.

Alas, this year, WSSF wraps up on April 17, thus depriving those so inclined to celebrate the pagan holiday of 4/20, a.k.a Bob Marley Day, with no collective, music-filled venue. Blame the First Council of Nicaea.

Well, here's an idea. If Easter, which is the most holy of holy days in the Christian faith, can roam all over the calendar, why not 4/20? Let us open our minds to the non-literal ebb and flow of time, brothers and sisters. After all, 4/20 is not just a day in April, it's a time of day. Twice a day for that matter, though many of us couldn't swear to that from first-hand knowledge.

So if 4/20 is just a time of day, and Skier's Plaza is going to be more than a little subdued on April 20, why not pick another day? For example, Tuesday, April 12. The weather forecast is for sun and warm temperatures. It's always nicer to celebrate when it's sunny and warm. And there just happens to be a — what's this? — a local band playing at 4:20 p.m. that day. Blame the Weekend is a five-piece band composed of Whistleratics Rachel Thom (sigh), Rajan Das, Gary Yoshida, Jason Chaulk and Matt King. In the writeup on the WSSF website, the very welcome words, "...full-throttle high-volume rock n' roll..." are used to describe their music. Good enough for me.

So by the power vested in me, which of course is none, I FORMALLY DECLARE Tuesday, April 12, 2016 shall henceforth be considered... no, wait. Seems to be a bit of discomfort in certain circles with the idea if me declaring anything formally on this page. So let's just leave it at that. Draw your own conclusions about next Tuesday and what you might do at 4:20p.m. and where you might do it.

Alright, now that that bit of housekeeping is out of the way, where was I? Oh yeah, the 21st World Ski and Snowboard Festival. Let's get one thing perfectly clear. If you're one of those naysayers, one of those people who think WSSF is tired, same-old same-old, been there, done that, why don't you just go golfing or surfing for the next 10 days? A part of the fun centre in your brain has died or just gotten too old to fun-ction. Better yet, head down to Vail. Bring water though. You might not run into another person who has any. Heck, you might not run in to anyone at all. Deadsville.

This is where the party is. And it starts Friday on Blackcomb with International Freeski and Snowboard Association North American Junior Freeride Championships. Friday and Saturday, skiers and boarders 12 to 18 years old will compete on courses easily visible and compellingly spectator friendly. While you or I might ski these courses carefully, the immortal groms competing for glory will be throwing caution to the wind, Friday on The Bite — good sightlines from Glacier Creek patio — and Saturday on the very badly named Couloir Extreme, formerly the Saudan Couloir, soon to be renamed Bunbury Chutes, in honour of what is generally believed to be the first person to ski it, while he was surveying the area.

Friday evening, State of the Art kicks off the cultural side of things with local, and not-so-local artists on display. Their work, not them. Well, maybe them. At any rate, art opens the mind and expands your horizons. It also helps you decide what you like and don't like and if anything in this world is certain it's that you'll find some of each at State of the Art.

Don't even bother asking me out Saturday night, because Saturday the roller derby queens are bustin' their moves at the conference centre. This year historic rivals Whistler and Squamish are teaming up to tussle with the Brick House Betties from Comox. That oughta be one tough match. You know what they say about Comox girls, eh?

Ditto the rest of the week. I'll be spellbound at Multiplicity on Sunday. I couldn't choose which of the eight speakers I'm most excited about hearing even if you forced me. And I know you won't. And like the cherry on your sundae, this event is a fundraiser for the recently approved Spearhead Huts Project. You can seek enlightenment, entertainment and know you're contributing to a good cause... all on a Sunday evening.

The Olympus 72-Hour Filmmaker Showdown, next Wednesday, is probably sold out. But hope springs eternal. Someone is going to get sick, have to play euchre with their aging uncle or do something they hadn't planned to do that evening when they bought their tickets. Check to box office frequently, keep an eye on social media and if all else fails, beg like crazy. Miracles happen.

And if you need a laugh to get over not having tickets to Filmmaker, catch the Whistler Comedy Showdown on Tuesday at Buffalo Bills. There were still tickets for that, last time I looked. The Showdown is kind of like the library. Really. Something to please and something to offend everyone. What more could you ask for?