If only I'd flossed and brushed more ...

Those who know and measure such things say one of the reasons women are tougher than men is because they may, during their lifetime, experience childbirth.
Nov 14, 2018 5:00 PM By: G.D. Maxwell 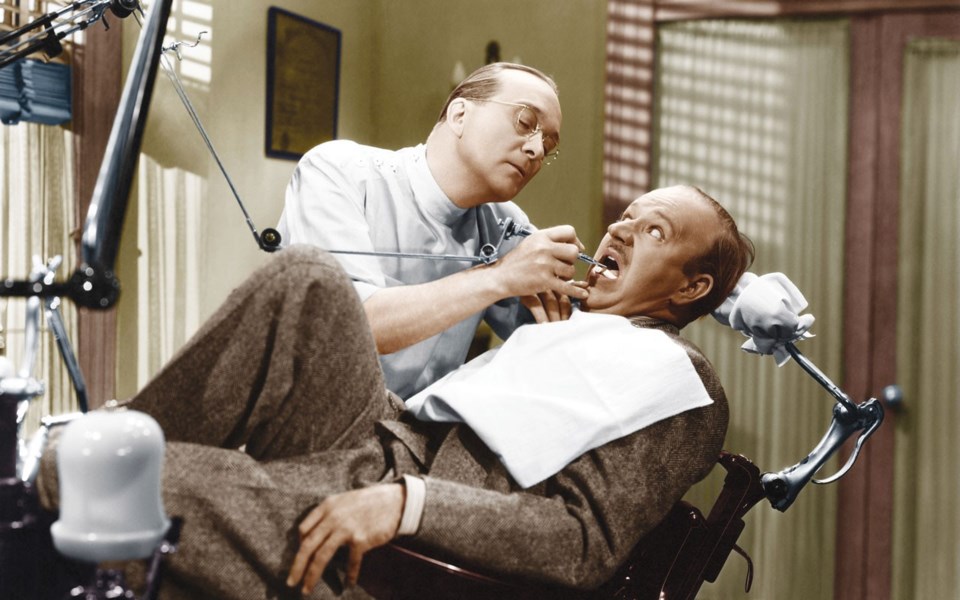 Those who know and measure such things say one of the reasons women are tougher than men is because they may, during their lifetime, experience childbirth. I always figured putting up with men was pretty definitive proof women were the tougher gender but I can't argue with childbirth since it's not something I'll ever experience again and the last time I went through it I was unconscious until some ham-handed doctor slapped me and made me cry.

But in the world of pain, as it has visited itself on my life, there is nothing quite so exquisitely soul-crushing, nothing as blindingly painful as something gone terribly amiss with one of the 32 teeth I'm supposed to have in my mouth. My experiences with dental pain have led me to imagine I'm giving birth to triplets ... through my mouth.

It's my own fault, mostly. As a child I only recognized two main food groups. Food that had things in it I didn't like—which was pretty much everything—and food that was guaranteed to rot your teeth. I considered Snickers bars salad as long as they spent some amount of time in the refrigerator's crisper. I figured chocolate milk was every bit as good as white milk and, as long as that was true, why not eliminate the pretense and cut right to milk chocolate; it was easier to carry in my shirt pocket and I never spilled it. I liked peanut butter sandwiches on gooey white bread and I liked jelly sandwiches but I couldn't stand peanut butter and jelly sandwiches. Go figure.

The price I paid for my choice of cuisine and what can only be described as laissez faire oral hygiene was a close and abiding relationship with a series of dentists, all of whom would probably have made very good bricklayers. I don't know where my mother found these guys, nor whether they were simply the norm in the profession at that time. They were, however, not many generations removed from the barber dentists of the Old West. Being a typical eight-year-old and not shaving, I'm sure I missed out on the more practiced of their talents.

In those dark days before dental hygienists, dentists cleaned teeth themselves. Naturally, they couldn't charge as much for cleaning teeth as they could for other procedures because cleaning teeth hurt less and on the sliding scale of screams, the more cries of anguish, the higher the bill. Therefore, dentists—who understandably wanted to live like doctors—cut corners in order to save time and torture as many children as was humanly possible in a day's work.

My own dentist, for example, eschewed the use of Novocain for any session that didn't involve yanking a tooth. In fairness to him, I have to say he was partial to yanking teeth, it being both more humane than drilling without anesthetic and the very top end of the pay-for-scream scale. He would stick his Macanudo-size, tobacco-stained fingers into my mouth and poke around, wiggling this tooth and that, hoping one or another would come loose enough to justify yanking, and having no luck would say, "Well, I guess we'd better fill that little cavity in the back."

Then, in an obsequious, avuncular way, he'd lean really close and say, "You're a tough kid, aren't you? You don't need a needle for that little cavity, do you?" Both were rhetorical questions. He wasn't going to give me a needle even if I'd been crazy enough to want one and I wasn't that crazy. The needles in those days were attached to syringes the size of the ones used today to artificially inseminate cows. The working end of the needle was less sharp than the point I'd created on the shaft of my rubber-tipped toy arrows after I'd taken the tip off and spent half an hour honing them in a pencil sharpener. Mine was a tough neighbourhood; we played cowboys and Indians for keeps.

Whatever the level of my initial trepidation, it turned to full-on fear when I heard the drill whirl and felt it bite into my hard-earned tooth decay. It was during one of those sessions, after a shock of electricity that jolted my body rigid and levitated me some inches out of the chair, that I first glimpsed the faraway white light we're all moving inexorably towards. It was also during one of those painful sessions I mastered the extraordinary bladder control that would make me a barroom legend.

Things were not much better for me when my dentist deigned to use Novocain. Not being very well practiced with it, his placement often missed the mark. His most traumatic miss was a tricky shot in the upper front gum. You know the one, the most painful possible place on your whole body to get a needle. He drove the point up my gum and for good measure into my nostril and ineffectively squirted the Novocain into my nose where it ran down the back of my throat, completely numbing my esophagus, making both swallowing and blowing my nose damn near impossible for the next two hours.

Was it any wonder I ran screaming from the theatre the first time I saw Laurence Olivier play the evil Nazi Dr. Szell in Marathon Man? "Is it safe?" Hell no, it ain't safe.

I reminisce about all things dental because by the time Pique comes out this week, I'll be minus a tooth I've grown rather fond of over the course of my life. It's challenged the skills of multiple dentists in my many journeys around the sun, the first who filled it, the second who refilled it, a procedure requiring little pins—dental rebar—to hold the amalgam in place, the third who got rid of all that nonsense and root canalled it, capping it with handsome if not particularly valuable gold, and the very skilled one who levered it out of my jaw this week because one of its roots fractured.

Having eaten heartily prior to my new diet of scotch broth—OK, scotch—I look forward to the next two years, the approximate length of time it'll take to secure the infrastructure necessary to screw in a prosthetic replacement to keep the tenuous teeth on either side of it from drifting like Earth's tectonic plates into the void its absence has created.

Not that this story needs a moral but the next time someone plays the What Would You Tell Your Younger Self game with me, I'll answer: floss and brush.