It begins with acknowledging prejudices

It's hard to believe —I hardly believe it myself—that I've been writing this column for almost 24 years. More than 1,200 times I've sat down and stared at a blank computer screen and had it stare back at me, expectantly.
Jun 6, 2019 12:00 AM By: G.D. Maxwell 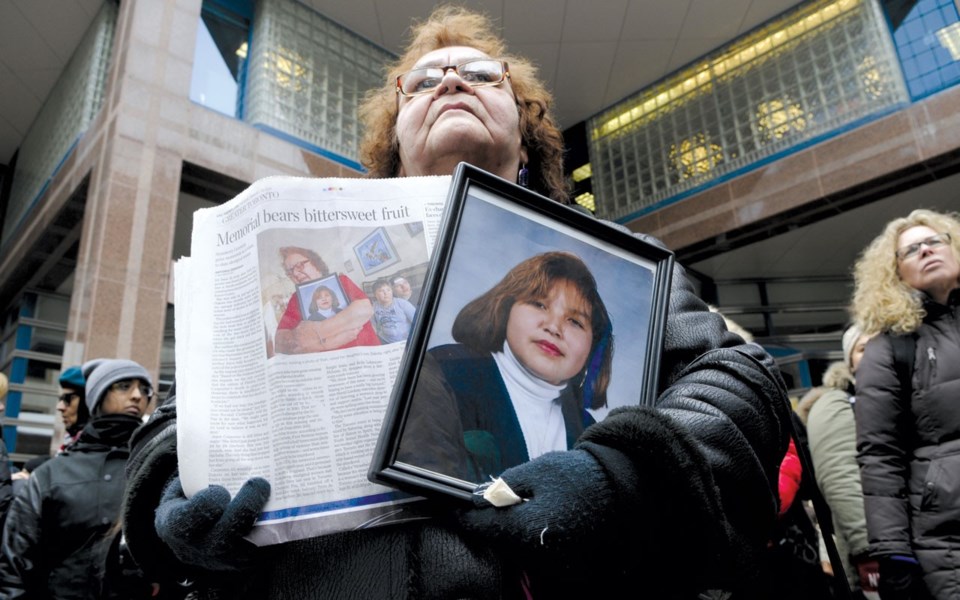 Joyce Carpenter holds a photo of her daughter Trish, who was found suffocated in 1992 , during the Annual Strawberry Ceremony on the National Day of Action Honouring Missing and Murdered Indigenous Women. photo by arindambanerjee / <a href="http://Shutterstock.com">Shutterstock.com</a>

It's hard to believe—I hardly believe it myself—that I've been writing this column for almost 24 years. More than 1,200 times I've sat down and stared at a blank computer screen and had it stare back at me, expectantly. I never thought Pique founder Bob Barnett's insane offer would last more than a couple of weeks, ironically about as long as it took for the first pissed-off person to threaten to sue Pique over something I'd written.

Recently, more times than I'd like to admit, I've stared at the blank screen and wondered whether I should still be doing this. This is one of those weeks.

This is one of those weeks where I'd like nothing more than to comb through past columns and pull one out, spruce it up with some topical references and put it out there to simply entertain. After all, it's summer—in all ways other than astronomical—and the livin' should be easy. It's not a good time to be beating people over the head with warnings of imminent demise, shining a light on political shenanigans or even grousing about the pathetic human being ruining the country to the south of us and taking the rest of world down the toilet with him.

And chances are that's what I'd have done if I hadn't found myself waking up in a country accused this week of committing genocide against its Indigenous population.

It made me feel sick the first time I heard the accusation. It still makes me feel sick. Like so many Canadians, both native born and immigrants, I've never imagined friendly ol' Canada would join the ranks of ... of whom?

As it turns out, just about every country, every tribe, every group of humans who've ever lived and were powerful enough to wage war against their neighbours or their "own" people.

Just within the two continents sharing the name America, Canada has joined the U.S., Mexico, Brazil, Argentina, Chile, Colombia, Guatemala, Paraguay and others following in the bootsteps of Spanish conquistadors and Portuguese soldiers who have commited genocide against native populations.

And, not surprisingly, we're in good Commonwealth company. British colonists and soldiers practiced genocide across the empire. Aussies, too, have been so charged.

And while the word itself was only coined in the mid-20th century to describe events in Armenia and Nazi Germany, one need not look too closely at the historical record of inter-tribal warfare of Canada's own Indiginous peoples to see many of them were guilty of genocide against other Indiginous nations.

Somehow though, being in a crowd of supposedly civilized people who have committed genocide doesn't make me feel any less sick. And, I suppose, it doesn't move the needle very much in overcoming this all too human failing.

So, assuming it's even possible, what is the way forward? I'll assume there is but I'm not completely comfortable in that assumption. The reason I'm not comfortable is both historical and a sign of the times in which we live.

Historically, you don't have to look very far to understand there are plenty of examples of ancient tribal, ethnic, cultural and national warfare being carried out today over wrongs done, in some cases, centuries ago. Old animosities apparently never die; they just lie dormant until some leader or group get their knickers sufficiently in a knot to resort to armed conflict. We are all, it seems, the Hatfields and McCoys, the Yorks and Lancasters, the Stewarts and the Douglases, Tairas and Minamotos, the Pazzis and Medicis. Hell, it's amazing enough of us were able to get along with each other long enough to invent refrigeration!

And so, Canada's to blame. It's Canada's fault. Canada committed genocide; Canada must atone.

I'm not going to get drawn into arguing whether genocide is the correct word or not. I'm not invested enough and I'm tired of every crackpot with email accusing me of one form of intolerance or another for something I've written. And, like something in excess of 90 per cent of the country's population, I'm not going to wade through 1,200 pages of the report issued by the National Inquiry into Missing and Murdered Indigenous Women and Girls.

I guess I'm like a lot of other Canadians. I'm powerless to move the needles of either the federal, provincial, municipal or tribal governments to any substantial degree. I can't make successive B.C. governments get serious about settling land claims, I can't remove the paternalism inherent in the Indian Act. I can't end poverty, improve living conditions or relieve cycles of self-destruction that exist on far too many reserves. I can't comment on the corruption practiced by some tribal governments that exacerbate already intolerable living conditions.

All I can do is live my life without acting on my prejudices. Like many roads to recovery, it begins with acknowledging those prejudices even though it's nearly impossible to comprehend where some of them come from. Prejudice is, largely, though by no means exclusively, a learned behaviour. Given its genesis, the only hope is to, in turn, learn to recognize it and learn to not act on it.

I'm the first to admit I don't understand people who hate other people because of their ethnicity. Maybe that's a result of growing up in the southwest and failing to understand Chicano kids and Pueblo kids I grew up with, went to school with, played sports with and hung around with were somehow different enough from me to be discriminated against. Some were smarter and some were less smart, most were better athletes, some poorer and others not, but somehow, we all managed to have fun together and find far more in common with each other than the things that differentiated us.

Whether the 200-plus justice recommendations contained in the committee's report will be acted upon—not likely until after October's election—and whether they'll prove to be a path toward solving any of the problems that exist between genocide Canada and Aboriginal Canada or not, will be an experiment in living history.

I'm not optimistic. Perhaps there has simply been too much backsliding lately on the evolutionary march of homo sapiens for me to be convinced we can even solve small problems let alone such monumentally large ones as our relationship with Canada's Indigenous people.