MAXED OUT: In case you were wondering about the dog days of summer 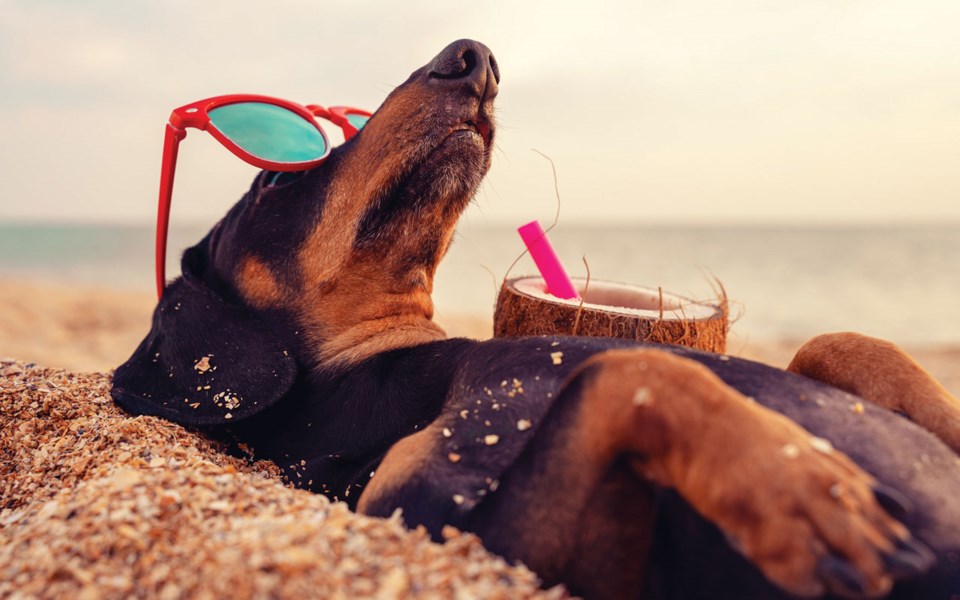 For the first time in five years, I am not dogless. A large shepherd cross—crossed with what, I have no idea—is bunking with me for a couple of weeks while his people pretend to work on a boat somewhere up the coast. She, the dog, not her personmother, likes bedtime stories. This is her fave.

Orion never left home to go hunting without three things, four if you count his plaid shirt: his bow and arrows—yes, those are actually many things if you want to get literal about it; his dogs—ditto; and a large skin full of wine he’d nip at all day long to calm his nerves, sharpen his eyes and make him seem funnier in case he ran into some fair damsel he wanted to impress with his witty repartee.

Since the prey he often pursued were the seven daughters of Atlas, it wasn’t like he never ran into damsels while hunting. Atlas was a joker who laboured under the illusion he supported the heavens on his broad shoulders and, being obviously crazy, gave his daughters names like Merope, Sterope, Alcyone and Electra, this being an age before such “normal” names as Ethel, Blanche, and Tiffany. Because no one in ancient Greece could keep all the girls’ names straight, they simply referred to them as the Pleiades, the ancient Greek word for “girls borne of a crazy man and given incredibly bizarre names.”

Anyway, Orion became obsessed by the Pleiades and hunted them like there was no tomorrow. Historically, Orion, it should be noted, was the first recorded stalker in history, but that wouldn’t really become a recognized obsession until late in the 20th century, by which time it would get lost in the miasma of psycho-social maladies.

The Pleiades didn’t particularly enjoy being stalked by a giant of a man who wore plaid all the time, was usually drunk and always had a couple of smelly dogs with him. It was like, “Gag me with a spoon, who is this guy?” So they ratted Orion out to their father Atlas who said, “Gimme a break already. I’m keeping the heavens up, you girls aren’t getting any younger and I don’t see a lot of other guys sniffing around wanting any of you.”

Realizing they couldn’t count on their crazy father for help, the Pleiades turned to their friend Diana. Diana was a babe, a real looker. She was also really good with a bow and arrow and she, too, had a dog. Actually, if Orion hadn’t been drunk all the time, he probably would have realized Diana was a much better prospect for his amorous advances and put the moves on her but, like I said, the dude was obsessed. It probably didn’t help that she was also the goddess of virginity in a land where men were men and sheep were worried, but everybody has their cross to bear.

To make a long story short, Diana killed Orion and remained a virgin. Orion and his dogs became constellations in the night sky as did, ironically enough, the Pleiades who finally pissed Zeus off. Zeus, being the big kahuna of ancient Greek gods and having a lot to keep track of, couldn’t keep the girls’ names straight and got tired of them always harping at him, “No silly, I’m Sterope; she’s Merope.” Zeus, who was a real joker, set the girls among the stars to get them the hell out of ancient Greece and relieve their crazy father of his main terrestrial worry, letting him concentrate exclusively on holding the heavens up.

So now—and presumably forever—Orion and his dogs Canis Major and Canis Minor endlessly chase the Pleiades across the night sky of the Northern Hemisphere from December through March and across the Southern Hemisphere between November and April, taking the summer off to vacation in the Greek Isles.

But Siriusly, this isn’t about Orion; it’s about his big dog, Canis Major. Lost to history is the big dog’s name, so we’ll call him Scooter. Scooter and his buddy, whose name is also lost to antiquity, were important enough to the story that they became their own constellations, always leading Orion onwards towards his elusive prey. Well, actually, they’re leading Orion toward the constellation Lepus, the Hare, because any sane dog would rather chase rabbits than sniff around a bunch of girls. Orion was too dense to realize they had their own agenda.

The brightest star in Scooter is Sirius. Sirius is, quite naturally, called the Dog Star. If you were drawing the constellation Scooter, Sirius would be Scooter’s nose. Kind of like Rudolph the Red-Nosed Reindeer, who isn’t a constellation but we all know the song anyway.

As an aside, in the never-ending battle of dogs and cats, the sky is just filled with dogs. Besides Orion’s mutts, there are Boötes’ Hounds, Canes Venatici, so many dogs in the night sky it’s amazing there isn’t a constellation of some guy scraping off the bottom of his sandal up there. There are no constellations depicting the domesticated cat. Only lions...and tigers...and bears, oh my.

Historically, the ancient Egyptians—who’d heard the story of Orion and Scooter and the rest of them from Roman travelling salesmen—associated the rising of Sirius with the flooding of the Nile, known in ancient Egypt as the season of wet feet. Legend has it that in years when Scooter didn’t rise, the Nile didn’t flood and the dogs had nothing to drink but I’m not sure I believe that.

In modern, enlightened times, now that we’ve evolved beyond such myths and no one knows the names or locations of any constellations except weird guys who can’t get dates and look at the stars instead, we still celebrate Scooter and his dog nose Sirius. In the wee hours of early July mornings, the Dog Star rises with the sun. Since the sun is a lot closer, we can’t see the dog’s nose rise with it so you’ll have to take my word for it.

Scooter poking his nose up with the rising sun happens to coincide with the onset of hot weather in most parts of the Northern Hemisphere. It’s because of this coincidence we call these days the Dog Days of Summer.

The end. Hey, I told you it was the dog’s fave.