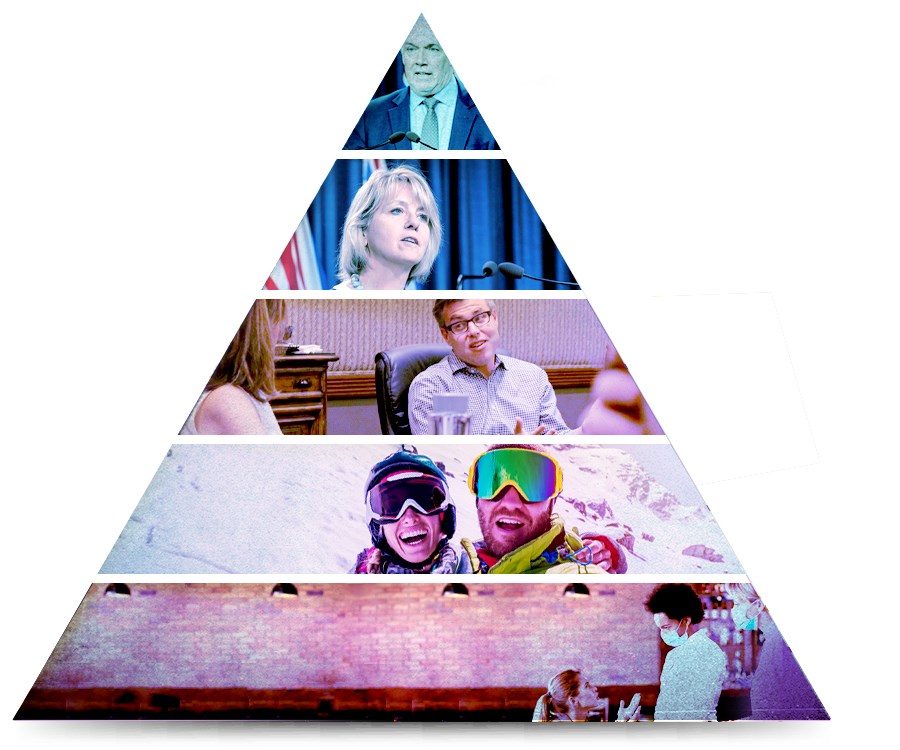 I’ve once again reviewed Dante Alighieri’s nine circles of Hell from his Divine Comedy and distracted myself trying to decide which I’d like to pitch certain people into for putting us in the position we’re currently in. Personally, I’m surprised no one has ever made it into a board game. It would be so much fun, not to mention therapeutic, to take characters from your life’s experience and cast them into eternal damnation. Very Old Testament.

But borrowing a popular visual aid, I’ve settled on the Pyramid of Shame. The Hierarchy of Bad Decision-Making to help categorize and visualize the daisy chain of utter failures that has found us, once again, with mountains full of snow, skies full of sun, no lifts running and no jobs.

The very tippy-top of the Pyramid of Shame is populated—almost exclusively—by Ol’ Dithers Horgan, B.C.’s Premier of Bad Decisions and Vacant Thoughts. “What,” I hear you ask, “has Ol’ Dithers done to deserve the top spot?” Perhaps the better question is, “What has he failed to do?” Unfortunately, posing the question that way would take several columns to answer since, by and large, what he has done pales in comparison to all the things he hasn’t done.

Ol’ Dithers suspended government at a time of urgent need to hold an election. An election wasn’t necessary to ensure anything more important than puffing up OD’s massive ego. He never seemed to have any trouble getting his way when he was propped up by the Greens. And lord knows he hasn’t made any bold moves since the election. In fact, the only substantial thing OD’s done since securing a majority is roll the dice on Site C, a project with the capability and probability of bankrupting the province. If the NDP thought the fast ferry fiasco cast the party into the political wilderness, wait until Site C blows up.

But the main reason Ol’ Dithers occupies the top spot is because he failed to heed widespread calls to close the provincial borders to interprovincial travel. “We’re studying our options,” was his first response. “We don’t have the legal ability to do it,” was his second. Oddly, the Atlantic provinces seemed to either have the legal ability to do it or they simply exercised the political leadership and will to do it. If OD understood the concept of political leadership he’d have done it and let the legal challenges play out.

Had he done so, Whistler would have been spared the invasions of privileged skiers from Quebec, Ontario, Alberta, et. al., who were certain their holidays were essential travel. Why is that important? Because that highly contagious Brazilian mutation running rampant through town didn’t walk up the freakin’ highway. And it didn’t mutate on its own here. It was brought in by our esteemed visitors.

Doubling down on his failure, he pulled a Trump and blamed the victims, the 20- to 39- year-olds he infected and then admonished, “don’t blow this for the rest of us.” You sanctimonious bungler. You blew this for all of us!

Somewhere in the top of the Pyramid, kind of like the Just Visiting space in Monopoly’s Jail, is Justin Trudeau and his pathetic, weak national border closure. I’m not sure how all those visitors from the U.K., U.S. and elsewhere slipped in, but we’ve had plenty of them.

Just under Ol’ Dithers is our own public health officer, Kind, Calm, Blind Dr. Bonnie Henry. When her encouragement to, “ski at your local mountains,” failed to impress Lower Mainland skiers, what did she do? Did she crack down on them? No. She caved and told them Whistler was their local mountain if they had a connection to it, which most seemed to mean if they knew it was north of Vancouver. She threw us to the wolves and they thanked us with mutations.

Once again, ignoring pleas from various fronts, Dr. Henry failed to take the one step she could have taken that would probably have avoided this disaster. She failed to force Vail Resorts to restrict reservations to residents of the Sea to Sky corridor and Lower Mainland folks who owned homes in Whistler. If she’d done that after seeing the base lineups over the holidays, we’d probably still be open. I won’t comment on the hypocrisy of waiting until after the Lower Mainland spring break to close us. Oh, I just did.

Right under Dr. Head-in-the-Sand is the Field of Brooms management of Vail Resorts. They could have done the right thing and instituted that restriction on reservations themselves. They did have strong COVID-19 protocols and otherwise conducted themselves as though they cared. But stemming the tide of skiers was a step too far, an affront to the corporate creed of greed. The forced closure, seven weeks early, is a price they didn’t have to pay.

It’s important to note this is not a failure of Whistler Blackcomb’s (WB) management. Given the highly concentrated decision-making model Vail Resort follows, taking this step would had to have come from Colorado... kind of like not penalizing people who choose not to travel and use their Epic passes this year, something else they’ve refused to do.

The penultimate large-level of the Pyramid is populated by all those self-important zombies who deluded themselves into believing a trip to Whistler was essential travel. The skiers, the gawkers, the inappropriately dressed sightseers, the mindless wanderers all came in droves. They wanted to ski, shop, eat, drink, mix and mingle. Many seemed to believe masks were for Halloween. Many more didn’t seem to believe anything. They needed service, they got it from frontline staff who, in return, were tipped with viral mutations.

And they, finally, are the ones who occupy the bottom of the Pyramid, a location they’re pretty used to, also known as the bottom of the food chain. But they’re the ones getting blamed? Really? Because they work several jobs serving the hordes who shouldn’t have come, because they live in over-priced, crowded housing shared by others like themselves, places where it became impossible to avoid exposure.

Yeah, some small percentage of them authored their own fate, didn’t take precautions, gave in to the urge to party. But not most of them.

But this time, we know who’s to blame.