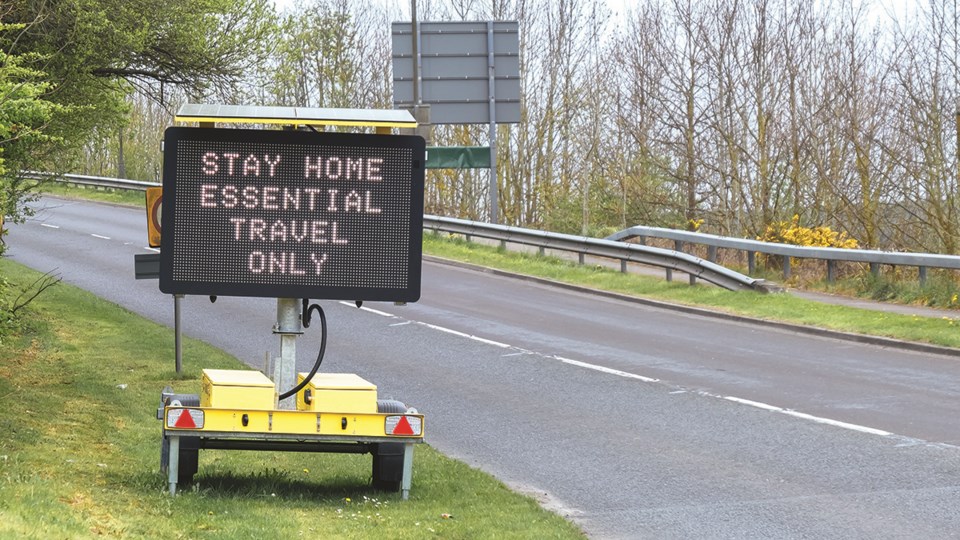 B.C. residents are officially in 'Left Coast Lockdown' until after the May long weekend. Getty Images

Well, it’s certainly been a week of Government in Action. Damn, autocorrect. That should read Government Inaction, also known as Business as Usual.

In keeping with my upbeat, every-cloud-has-a-silver-lining outlook, let us first consider the week’s highlight. Seriously. There was one. That was the five-day vaccination clinic that wound up Sunday at the Conference Centre. Estimates by those in the know point to somewhere in the neighbourhood of 9,000-plus townies and town workers having been shot full of hope.

Naturally some of them went out and partied afterward but most paid attention to the talk about the vaccine requiring a couple of weeks to bring recipients up to speed. With so many receiving so much, the town—now thought of as Canada’s Brazil in the world press—is well on its way toward herd immunity. Accomplished with nary an anti-vaxxer protester in sight, just a lot of people lined up, giddy with anticipation.

But Monday was a new day and, well, it was all downhill from there. First up, long on doom and short on facts, Ol’ Dithers Horgan slammed the door on B.C. Sort of. Not really.

After approximately 13 months of lukewarm, ineffective actions and no sign of political will, B.C. residents are officially in Left Coast Lockdown until after the May long weekend. We’re not really locked down, but travel is going to be restricted to whatever health region one lives in. There are, of course, exceptions.

The most glaring exception is the porous border between B.C. and the rest of the world. People can and are flying in from just about anywhere in the world. Some come bearing gifts of new mutations of everyone’s favourite virus. And once here, having gone through the tepid and largely uncontrolled quarantine-lite, they’re free to spread their unique brand of cheer... but perhaps only within the health region they’re in? Know how far the Vancouver Coastal Health region stretches? You don’t want to know.

And should they drive across the border from our neighbour to the east, they’ll be greeted with signs. Yes, signs. Not the ones that say, “Welcome to Supernatural British Columbia.” Not ones that say, “Albertans Not Welcome.” But signs that “remind” them they should not be crossing the border for anything other than essential business. Anyone with half a brain and a porous memory will likely remember how elastic the definition of “essential” has been for the past year. Viewed through a local lens, it is likely to have about the same effect as those signs around town asking dog owners to bag their dog’s poop.

And while Ol’ Dithers says, “It is not our objective to go into some sort of state where we’re watching and monitoring everybody’s activity,” he invoked the Emergency Program Act to allow police to conduct random roadside checks. Drivers will have to ‘splain where they’re coming from, where they’re going. Whether the police have powers beyond annoying drivers is unclear. Details to follow.

Campgrounds and hotels won’t take reservations from people outside their health authority regions, BC Ferries won’t book RVs and inside dining at restaurants will be further banned during the period.

What isn’t clear is this: How is this hodgepodge of restrictions actually going to help? How will Ol’ Dithers channelling his inner Doug Ford really wrestle this beast to the ground? Oops, two rhetorical questions in a row, both of which have the same answer—they won’t. But they give the illusion of doing something and it can be argued that in itself is a bold step for Ol’ Dithers.

And bears more than a little resemblance to the other front of Government Inaction—the long-delayed Liberal budget. In keeping with the longest period ever without a new budget, the Liberals wheelbarrowed in the largest—739 pages—budget in the country’s history. But it’s not an election budget. (Insert eye-roll here.)

No one who has been even remotely aware of the impact of school closures and moves to remote learning, work-at-home requirements, daycare limitations and the insane balancing act those in essential jobs who have to go to work face dealing with most of the above, could consider a $10-a-day childcare “promise” to be an election issue.

On the other hand, no one who has even remotely looked at the details could consider $10-a-day childcare as something they’ll see before their children leave home as adults. As outlined in the budget—which is not an election budget—the feds will “set aside” $30 billion over five years. What’s the difference between set aside and spend? An order of magnitude. They’ll spend $3 billion a year to start with, rising to $8.4 billion by 2026 and $8.3 billion per year thereafter. They estimate the funds will make childcare 50-per-cent less expensive next year.

Median monthly fees in B.C. currently run from $900/month for infants to $780/month for preschoolers. Half that is a far cry from $10-a-day. To get to that magic, and highly emotional number, the provinces have to match the federal spending. No word from the provinces yet on how excited they are about the plan.

The budget offers billions of dollars and scant few details to fuel the effort of achieving net-zero carbon emissions. So far, it’s the usual stew of tax breaks, funding for green businesses to get started or scale up, money to help defray the cost of carbon capture. Probably the best indicator of just how green this budget is comes from the reaction of the Business Council of Alberta, which bemoaned its failing to make continued natural resource extraction part of the country’s solution to environmental challenges.

Clearly this will not be an election budget in Alberta, where seldom is heard an encouraging word and Liberals are vilified all day.

The budget is a feel-kinda-good budget. It avoided much of the doom and gloom predictions of how far Ottawa would thrust its hands into our pockets. One of the only revenue generators is a proposed one-per-cent vacant home tax levied against foreign owners. The rest of the very large deficit canyon dug in the past year and continuing into the future—beyond the next election after the one this budget isn’t about—will be taken care of through growth in the country’s GDP, the hope of continued low interest rates and a handful of magic beans that will enhance Canada’s productivity.

Oh well. We’re likely to forget all about this week’s Government Inaction when the election or the fourth wave rolls around, whichever comes first.