MAXED OUT: There’s a formula for that… 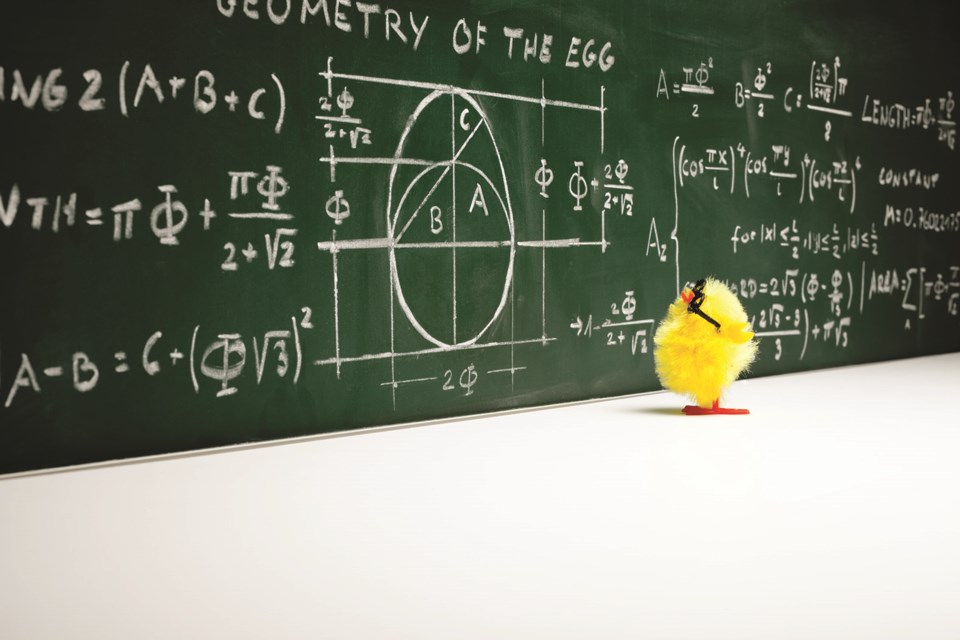 Death comes suddenly... always. Your heart beats; you’re alive. It stops; you’re dead. You never know which beat is your last. It happens suddenly, even if it was foreseeable.

I skied yesterday. The mountains are closed today. It happened suddenly. In the time it took me to go from the base to home.

It was foreseeable. I’m still shocked. But I’ve moved on to the third stage: Anger.

Anger is not an emotion that makes for good writing. It does make for bad social media. So I’m going to let this simmer until next week and come to grips with yet another season foreshortened by political, corporate and human failure.

In the meantime, we are celebrating both April Fool’s Day and Easter this week. With the mountains closed, my April Fools reveal of Oakley’s new Skier Collision Avoidance System seems untimely. So let’s focus on Easter since none of us need another joke pulled on us this week.

Easter, ostensibly the Christian celebration of the resurrection of Jesus, is the Rubik’s Cube of holidays and as such, has always been the holiday I most associate with celebrating my own state of normalcy, to wit: the State of Confusion, not to be confused with my current State of Anger.

Easter is often referred to as a movable feast. Movable because the holiday can fall any time between March 22 and April 25. Feast because... well, I’m not sure why but having stuffed my youthful face with chocolate bunnies, marshmallow chickens and accidentally ingested cellophane grass—an unwanted byproduct of speed and gluttony—often enough to wish I’d been born an atheist, I’ll just go with the flow on the feast thing.

Along with my cynical disbelief in all things miraculous, it was this ethereal quality of Easter that led me to conclude religion and I would follow two different life paths. I reckoned if the death and resurrection of Jesus were the touchstone events of Christianity and the most learned Keepers of the Faith couldn’t nail down the date of those miracles any closer than within an entire month, who was zooming who, so to speak?

But in my quest to study all things trivial, I learned the whole Easter thing was a religious-political compromise, a melding of cultures and, best of all, a really cool astronomical-mathematical puzzle. It wasn’t enough to bring me back into the fold, but trotting out the Formula For Determining Easter is still a great party trick, assuming we still had parties.

Like most religious holidays, Easter has pagan roots modern churches take great pains to dye with a colouring of piety. And like most pagan holidays, it has more than a passing relation to fertility, which is to say, foolin’ around. Not coincidentally, like Christmas, it also has to do with the astronomical changing of the seasons, this time the vernal equinox.

Easter is the climax of Lent, which is so complicated and drawn out and wrought with guilt I can’t bring myself to discuss it, though I still eat pancakes to kick it off.

Of all cultures for which Easter is truly the best time of year, it’s the Mexicans that seem to do it right. While figures are sketchy, it is currently estimated that before the pandemic, approximately half of Mexico celebrate Semana Santa, the week between Domingo de Ramos and Domingo de Gloria by humbly skiing in Whistler. Perhaps next year, amigos.

While Whistleratics share few Mexican celebrations leading up to Easter, we do celebrate our own version of Los Judas later in the season. The burning of Los Judas—Judas Iscariot—takes place after mass on Holy Saturday, the Saturday between Good Friday and Easter Sunday. A large papier maché effigy of Judas, the devil and not infrequently, unpopular politicos, is set alight amid much good humour and celebration to symbolize the triumph of good over evil.

In Whistler, we have our own nascent celebration: Early and Unexpected Closing.

Getting back to the date of Easter, the First Council of Nicaea, called in 325 AD, by that buttinski Constantine, established the date of Easter. The Council wanted to establish a formula for determining the exact date of Easter until the End of Time. It didn’t help that they were using the Julian calendar but it’s not like they could foresee Pope Gregory and his obsession with Leap Year.

They developed tables that make sine, cosine and tangent tables look like a walk in the park. So complicated was it that they simplified it to three rules:

-Easter falls on the first Sunday following the first ecclesiastical full moon that occurs on or after the day of the vernal equinox;

-this particular ecclesiastical full moon is the 14th day of a tabular lunation (new moon); and

-the vernal equinox is fixed as March 21.

Easy, right? Except there are differences between ecclesiastical full moons and astronomical full moons, the vernal equinox isn’t always March 21st, and then those pesky time zones came into existence.

Be that as it may, here’s the algorithm for computing the date of Easter. Use it if you ever hit on a math major in a bar. The algorithm uses the year, y, to give the month, m, and day, d, of Easter. The symbol * means multiply. And, it is an integer calculation; all variables are integers and all remainders from division are dropped.

You can thank me later.