MAXED OUT: Warning—* (asterisk) ahead 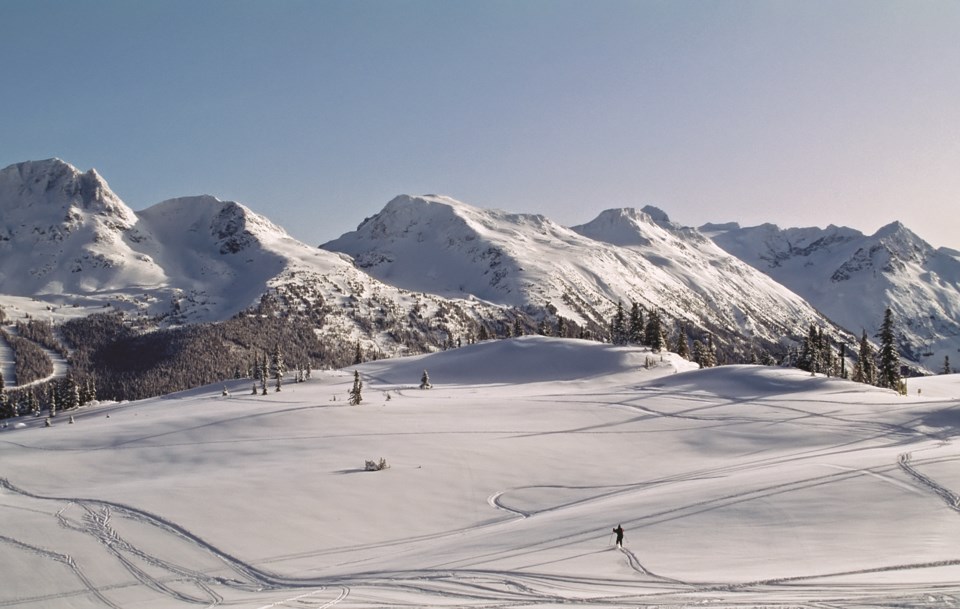 It was a great season to ski Whistler and Blackcomb mountains, but the ongoing coronavirus pandemic calls for an asterisk next to the ranking.gettyimages.ca

In a week where daytime temps are finally breaking double digits, with copious snow on the mountains and plenty of sunshine, this would have normally marked the beginning of spring skiing.

Spring isn’t an astronomical season for skiers. It’s a phase within the hydrology of snow that, ironically, is more accurately thought of as the autumn of snow, the season before snow dies and reverts to water.

In the hierarchy of ski conditions, spring skiing spans a range from near the apex to the nadir, Dickens’ best of times, worst of times, Whistler’s spring of hope and, for the second year in a row, winter of despair.

Nothing is to be gained from early starts in spring unless you relish skiing on ice and dodging grooming traps. Sleep in and be rewarded. Follow the sun as it warms up the night’s ice, turning it into a creamy slurry—hero snow. Follow it further around the compass as the cream turns to schmoo. Save slush for your ski out.

Of course, there is no spring skiing this year. At least not on Whistler or Blackcomb mountains. Once again, we’ve been pandemified, closed early and unexpectedly.

Which brings us to the asterisk.

Asterisk is a funny word. But then, it’s a funny symbol as well. And an ancient one, thousands of years old in printed form and even appearing in ice-age cave paintings. Its functional use, pre-mathematics and computers, was to draw attention to something, although its invention will be a mystery until someone invents a working time machine.

Ironically, its modern day high point turns out to be largely illusory. Common belief is it was appended to Roger Maris’ 1961 home run record, the one that topped Babe Ruth’s 60 home runs in a single season some 34 years earlier. By the time Maris looked like he was going to break the record, Ruth had already been deified, Maris was seen as a country hick and if anyone was going to best the Babe, it was supposed to be Maris’ teammate, Mickey Mantle. Maris received death threats, foreshadowing the racially tinged death threats lobbed at Hank Aaron 13 years later when he was set to pass Ruth’s all-time home run record.

Ford Frick, baseball’s commissioner at the time, mused that if Maris, in a 162-game season, hit more than the 60 homers Ruth did in a 154-game season, the new record should carry some distinctive mark. A sportswriter suggested an asterisk. While the asterisk became woven into popular culture, it never appeared in any record books next to Maris’ 61 homers, the record breaker coming in the final game of the season. Time washed the issue, but not the legend, away; steroids fuelled the records—McGwire, Sosa and Bonds—that eclipsed Maris and Ruth.

Which is just a word-gobbling prelude to the annual question: What kind of season was it?

It was a season to which I give high marks... and an asterisk. High marks notwithstanding going into the season with low expectations. Like most who can remember that far back, I was uncertain how onerous the reservation system would be, how much spontaneity it would take out of waking up, checking the weather and heading or not heading for the mountains.

It turned out to be beneficial, at least personally. Until late in the season, we simply reserved almost every day other than weekends and a number of days, headed up the hills for no better reason than we’d reserved. The benefit was racking up the most days of any season. The asterisk is missing 20 additional days we’d planned on. Can I get a first-world amen for that problem?

La Niña, not Ullr, ruled this winter’s weather. This was not the boisterous party girl La Niña who roars in, dumps a month’s worth of snow overnight and leaves just when you hope she’ll move in for a couple of months. This was demure, polite, petit, unpretentious La Niña who came over, tidied things up, stuck around and is having a hard time saying goodbye.

She brought just enough snow at just the right time. She only unleashed her bitterly cold personality once and then not for long. Nothing flashy, just the perfect house guest you’d be happy to see return.

It was neither a memorable nor forgettable ski season. It was a Toyota Corolla season: always started, always ran, always got you where you were going, eventually. No flash, no trash.

As expected, base area lineups were the low point of the winter. Arrival times escalated to absurd proportions with people lining up, especially on powder days, shortly after six freakin’ a.m. The pressure to arrive early was fuelled as much by pandemic parking lots as avoidance of one hour-plus lineups that snaked to absurd lengths. Anyone who could drive did. Few were brave or foolish enough to give friends rides. Staff vehicles needed somewhere to park. It often meant the “Lots Full” signs were up before 9 a.m.

But the reward for early starts and perseverance was generally uncrowded slopes. It often reminded me of the weeks prior to the Olympics™ when there were so few people around I sometimes wondered if I’d missed skiing past a closed rope. Collisions and injuries were down, according to patrol and clinic staff. The quality of skiing and riding was noticeably better with fewer Epic-ers.

With cold, frequently dry snow, groomers never had it so good and the quality of their work proved the point. For the same reasons, off piste was generally superb. Heck, even the lifts seemed to stop less frequently than they usually do.

So it was the winter of hope realized and the spring of despair, with elements of the best and worst. Overlaid on it all was the life-affirming pleasure of simply being on the mountains after being constrained by this virus for so long.

And hoping next year is a long, full, humdrum 7.5 or better... as long as there’s some spring skiing involved and we can fill the gondolas instead of watching them go up with a lone person.