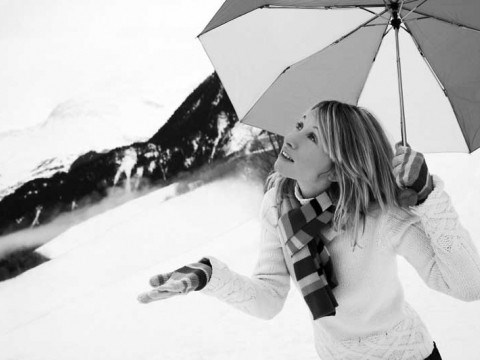 Sometimes I'm just too smart for my own good. Thinking last week's experiment in open and transparent communication - publicly answering readers' burning questions languishing in my inbox - would clear out that particular backlog, I was flummoxed once again. All it did was lead to more inquisitive letters, assuming semi-literate e-mails can be called letters, which I guess they can since we still talk about dialing a phone.

In any event, here's one more round. But this is it; stop writing and asking me hard questions. The Olympics are coming; this is no time to think.

I'm getting worried about all the rain that's been falling. If this is that start of the second great flood, it'll ruin the Olympics. Is this God's way of punishing Whistler for being such a shallow, hedonistic, immoral town? Is He out to destroy us?

This is Whistler. It rains here. Get over it. This is an El Niño year, El Niño being some foreign language meaning, roughly, The Niño, or boy child. I guess if you really stretched for some religious significance in the weather you might question whether that means this is the second coming, as opposed to the second great flood, but since El Niño rolls around every few years, I doubt that it is.

With all the real cesspools of sin around the world, I can't imagine God would waste His time destroying Whistler. We may bend a few of the commandments around here but mostly we're too indifferent to break the really important ones, killing others springing immediately to mind. And besides, God's a busy guy. If He wanted to destroy Whistler, I don't think He'd waste 40 days of water when two weeks worth next month would do the trick. Either stop worrying or start building an ark; your choice.

As a small business person - lifeblood of the economy, or so I'm told - with a shop in Franz's Walk at Creekside, I've done about as much business in the past week, since the parking disappeared, as the defunct video store just around the corner from me. I'm afraid I won't be able to stay afloat until April with just walk-by business. What can I do?

Not knowing the nature of your business, I'd suggest stocking plenty of items Weasel Workers might be interested in. Of course, it'll be hard to compete with free beer but then, you're an entrepreneur, one assumes.

If that's not possible, you might want to get together with your neighbours and hold sidewalk sales. Or maybe contact the lawyer down in Vancouver who represented the Cambie street merchants in their successful action against the Canada Line.

Other than that, I'd suggest a quick inventory reduction at fire sale prices.

Funny you should mention fire sales. I have a business in Franz's Walk too. It has a fire exit that opens onto P1 parking level where, conveniently enough, the public washroom I'm supposed to use is located. After breaching security the other day to heed nature's call, I was visited by the RCMP who informed me they'll be blocking off my fire exit for security reasons. I don't mind bringing a bucket to work to pee in but since the fire inspector seems to have acquiesced to this plan, should I be worried?

Yes, you should be worried. But you should also stop whining. For chrissakes, this is the Olympics. What's the safety of - what do you have, like three employees? - a few people compared to the security of knowing terrorists will have to use a washroom somewhere else? If I were you, I'd bring a few more buckets to work to put out any flames that may spontaneously combust, or simply shut down until April. I mean, seriously, how much business do you think you're going to do between now and then anyway?

Do you think Mark McGwire should be stripped of his home run title and barred from baseball now that he's admitted using steroids and lying to Congress?

What the heck does this have to do with either Whistler or the Olympics? Who do you think I am, Dear Abby? But as long as you've taken the time to ask, yes, Michelin Man McGuire should be stripped of his HR title. I can't get worked up about lying to Congress since Congress lies to everyone in the world.

But I'd take punishment a step or two further if sports bodies were really serious about holding non-juiced athletic competitions. Anyone who tests positive should be banned immediately and have a picture of his shrunken penis posted on Youtube, unless he's a woman, in which case I wouldn't comment for fear of offending the transgendered community. Any money earned should be forfeited. All offspring of such cheaters should also be banned from sport. The entire team should forfeit their season or, in the event of, say, the Olympics, the entire country should be sent home... unless they're the hosts, in which case they should have to work in the athletes' village dining hall... naked... with the fire exits blocked for security reasons.

I think you're stupid. How can you say you won't feel proud to be a Canadian when one of our athletes stands atop the podium in Whistler or Vancouver with a gold medal around his or her neck? I think the Own the Podium program is the best money the federal government has ever spent.

Well, I can't argue with you; I think I'm stupid too, although for other reasons. And hey, if you feel good about all the dough OTP's spent to ensure Canada doesn't threepeat in the no-gold-at-home record book, who am I to suggest it's money ill-spent. Let's face it, with the world price of gold holding above $1,000 an ounce, it might even be considered a sound financial investment.

That having been said, I'm a little worried that three months before the upcoming Games, Roger Jackson, the principle pusher behind OTP, is trying to breathe life-after-the-games into the program with requests of an additional $60 million a year in funding for... well, forever. Who said money isn't an addictive drug? Not me.

I'm outta here. My ticket's booked and I'm leaving for the month of February. Do you know what I can and can't take aboard the plane?

I'm getting on a plane myself tomorrow. Since I'm flying somewhere warm, I'm checking a bag and going naked. Unless ridicule and humour have been deemed weapons of mass destruction, I should pose no threat and breeze through security. I'll let you know how it goes.