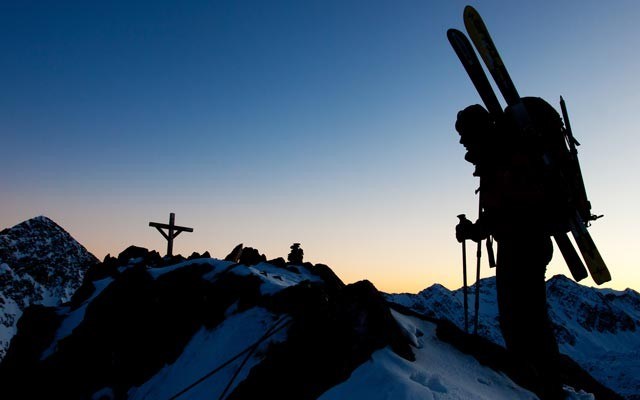 With apologies, this week's column is more or less a rerun. Partly because with any luck I'm flying home from my mother's 90th birthday celebration and partly because I keep getting people asking me to run it again as a reminder to all of those — we — who duck the ropes and play in the backcountry. Especially now.

Should I have the misfortune once again to have this column appear shortly after what mountain guides like to call an "incident," please understand it is not a finger wag or indictment of anyone in particular. It is a cautionary tale, nothing more or less. It's something most of us who trek in uncontrolled terrain know but have to continually remind ourselves of, myself included.

Conditions in the backcountry are very scary right now, which is January 8, just in case things firm up by the time this runs and you wonder what I've been smoking. If you don't believe me, believe Wayne Flann's avalanche blog www.wayneflannavalancheblog.com or, better still, believe Wayne and his spiral femur fracture. Wayne took a ride shortly after Christmas and if it can happen to him, it can certainly happen to you.

With the storms that finally arrived, the alpine and the backcountry are open for another season. That's a mixed blessing. As much as I've finally enjoyed skiing above treeline and a tramp in the Nearcountry, whenever the ropes drop and the Peak chair starts running the likelihood of death visiting our doorstep approaches certainty. And with it, like maggots on roadkill, a ridiculously uninformed — hey, let's call a spade a spade: absolutely stupid — media circus will descend on our happy mountain home.

If they're not lucky, they'll die a slow, agonizing, self-aware, frozen death. They'll be tumbled in the mother of all spin cycles. Their world will go all white and upside down. Then it'll go dark or, worse still, opaque and twilight, hinting at a surface so near yet so far away. Their body will be contorted and pretzeled into at best uncomfortable, at worse tortuous, shapes, frozen but not yet frozen, unable to move the inches necessary to give either relief or stab them with shocking pain. Their chests will feel like a team of sumo wrestlers is sitting on them. Their snowy tomb will feel more like concrete than the snow they'd imagined themselves floating so delicately through moments ago.

If they have any air pocket at all, they'll face the horror show of slowly suffocating to death, hoping against hope someone will find them but knowing no one will because no one knows they're there or, if they were skiing with others, resigning themselves to the fact their friends may well be in the same predicament. They may cry out for help, or mommy, but the sound will barely reach their own ears, let alone the surface. They'll use up what oxygen they have desperately trying to squirm free of their icy tomb. If they can move their hands at all, chances are pretty good they'll rip their fingernails off clawing at the hard-as-ice snow that's settled in around them.

If their brain is still capable of rational thought, they'll start remembering everything they've ever read, seen or heard about surviving an avalanche. Sadly, most of those things involve avoiding being caught up in an avalanche, very few involve getting yourself unstuck.

Almost imperceptibly, their oxygen will be replaced by carbon dioxide. They'll start breathing harder but each breath will be less satisfying, less life-giving than the one before. They'll realize the end is near and feel the tears rolling down their nearly frozen cheeks. Powerful memories will flood their short-circuited thoughts. They'll begin to feel weak and sleepy. They'll go to sleep. They'll die.

When they're found, it'll likely be by someone who has seen this grim visage before. A patroller or, more likely, one of the Search and Rescue volunteers called out of their warm homes, their loving families, their safe environments, to go search for the dead guy. Maybe the searchers will head right out, maybe things will be too unsafe and they'll have to wait. Doesn't matter to the dead guy. The decision that the slopes are safe enough is, in itself, a judgment call. Usually, but not always, a correct call. Only the final outcome determines the accuracy of the judgment. The reality is that danger is always a loose slab away, even for rescuers.

Meanwhile, the survivors, the ones left behind, will stumble around in shock, make funeral arrangements, maybe plan a memorial service, console each other and ask the unanswerable question: How... why, did this happen?

Sooner or later, someone will mouth the most inane words ever spoken: "He died doing what he loved."

Brad Sills, who has pulled more bodies out of icy graves than he cares to remember, once showed an uncharacteristic flash of anger when the conversation came around to that phrase. Acknowledging it is meant to comfort, he finds no comfort in it whatsoever. "Once you've seen the contorted, tortured, horrified look on the face of someone you've just dug out of a snow grave, one thing is absolutely clear — they definitely didn't love what they were doing." Like the old saying goes, it ain't the fall that hurts you; it's the landing.