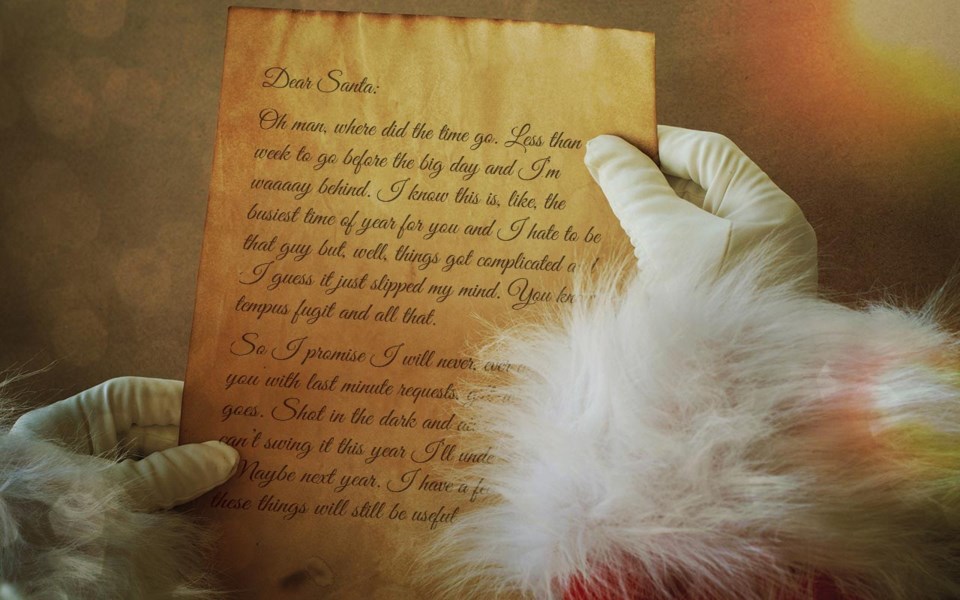 Oh man, where did the time go. Less than a week to go before the big day and I'm waaaay behind. I know this is, like, the busiest time of year for you and I hate to be that guy but, well, things got complicated and I guess it just slipped my mind. You know, tempus fugit and all that.

So I promise I will never, ever again hit you with last-minute requests, gift-wise, but here goes. Shot in the dark and all that. If you can't swing it this year I'll understand. Maybe next year. I have a feeling most of these things will still be useful a year from now.

If it's not too much to ask, and since I know you have lots of it where you live, I believe I can speak for everyone where I live and ask for some snow. This isn't like those, "Oh I have a lot but I want more," requests you frequently hear from here. This is more an, "Oh sweet Jesus, if we don't get some snow there's likely to be a very blue Christmas ... January ... February ..." kind of request.

I know sometimes it seems like we take snow for granted, what with all the businesses busy heating the outdoor air with the patio heaters and open doors but you, perhaps better than most, understand the irrationality of humans. As much as I'd like to get everything I ask for, if you can just swing this one I'll be forever grateful.

But as long as I'm asking ... regime change in my former U.S. home and native land would be, well, a gift for the entire world. I know. There are many people who are happy with how their stock portfolios have performed the past three years and how lots of jobs have been created but considering the cost, isn't it being just a bit selfish on their parts to want to keep this reign of terror going just for their benefit? I mean, really, pouting about a 16-year-old beating you out for Person of the Year? How pathetic is that?

Maybe if that's too much to ask, you can just gift a little backbone and sense of responsibility to 20 or so Republican senators who know, in their heart of hearts, they'd be setting their hair on fire if it was a president from the other party acting the way this one is. As the old song goes, there's no interest like self-interest. But hope springs eternal.

Of course, I'd like some things for those living in the Great White North. It's just that being Canadian, we tend to think of the suffering of others. At least we'd like to believe that.

The people in Alberta are having a tough time of it. They're feeling picked on and slighted by a federal government they didn't vote for. They're pretty sure the Prime Minister could just thumb his nose at the Supreme Court and get that damn pipeline built for them if he wasn't such a Trudeau. They think Quebec is robbing them blind. They'd prefer not to think of how the oil barons have led them down a dead end and successive provincial governments have pissed away a fortune. I know you probably can't fix these things, but could you at least make it so the rest of us don't have to listen to their endless whining? That alone would be a grand present.

And while we're on the subject of whining, could you please just put a gag on a certain former Liberal Justice Minister. I fear we're going to hear a whole new level of whining when she gets rightly booted out of the parliamentary offices she's no longer entitled to, except in her own mind's "truth."

Closer to home, we'd like some relief in Whistler. I know, I've already asked for snow but this isn't like that request. I'd like to ask for, well, nothing instead of something. You see, we have this chimerical thing called the Whistler Standard. It's an overblown sense of who we are and our place in the world. It's led to some egregious examples of excess over the years but at the crux of it, we've managed to bid up the price of building just about anything here.

So now our leaders—I frequently call them enablers—want to spend four-and-a-half-MILLION dollars to build a couple of new public toilets. They justify this by saying, "It's not real money, it's RMI money," or "That's just what it costs to build things these days." Problem is, it costs that much to build things these days because successive waves of enablers haven't noticed the big "sucker" tags someone pinned to the backs of their shirts.

So, if you could, please gift them the ability to say, "No. We're not going to build this at that price." I suspect if they said that more often if might have a mitigating effect. Maybe not, but it would be refreshing nonetheless.

It would be nice if you could gift Andrew Scheer a pat on the back. He's been kicked in the butt so much since October's election he'll probably wince when you pat him but it'll make him feel better once he realizes you don't have a knife in your hand. Poor Andy. Zero charisma, bad advice, worse team, can't walk his talk and no wing of the Conservative Party was happy with him: Too liberal for the rabid right, too conservative for the big tent folks. But maybe it's all for the best. Some folks just aren't cut out to be politicians. Too bad the party didn't know that when they elected him leader ... on the 13th ballot!

Finally, I don't think there's much you can do for dead-tree newspapers but maybe you can gift longevity to a few of the survivors. It seems inevitable we'll be down to just a handful by the end of the next decade and with any luck, the good ones will be able to survive the transition to digital. But with so much real, fake news floating in the interweb—not the Trumpian kind of fake news, anything he disagrees with, real fake news like the kind on Facebook—it'll be even more important for the few of us who still wonder what's really going on in the world to have a couple of sources we can believe.

I know that's a big ask but it's OK if you can't deliver. I'll still put out scotch and cookies for you Christmas Eve.