In honour of Canada's 147th birthday, the Supremes performed. No, not that long-in-the-tooth girl group from Motown's glory days, the one fronted by Diana Ross before she was abducted by aliens and cloned Michael Jackson.
Jul 2, 2014 6:00 PM By: G.D. Maxwell 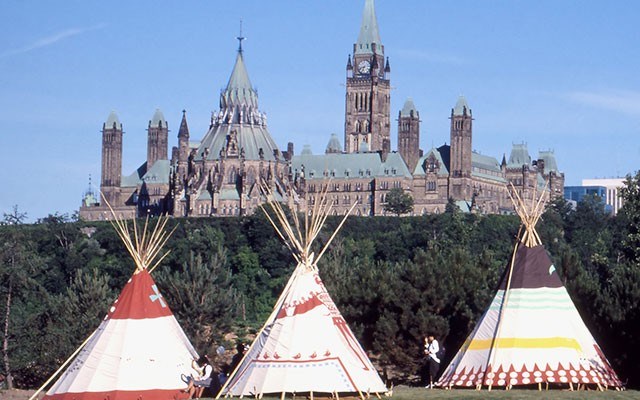 In honour of Canada's 147th birthday, the Supremes performed. No, not that long-in-the-tooth girl group from Motown's glory days, the one fronted by Diana Ross before she was abducted by aliens and cloned Michael Jackson. I'm talkin' about Canada's Supremes, the nine-member group led by PM Harper's nemesis du jour, Beverley McLachlin.

Not to confuse matters further, our Supreme Leader — that'd be Harper, not McLachlin — who has already crossed swords with the leader of the Supremes over such trifling matters as his inability to place an unqualified judge on the highest court's bench, has gone quietly ballistic over the Court's ruling last Thursday in the Tsilhqot'in case.

OK, between the belated arrival of summer, the prospect of a loooong weekend chock full of free concerts, bike rides, golf games, ArtWalk, and the smorgasbord of other diversions around town, you can be forgiven for having missed the Tsilhqot'in decision. What it did — to the extent anyone can really understand exactly what it did — was set the table for (a) decades long litigation over title to, oh, every inch of British Columbia, (b) bring all economic development projects in the province to a grinding halt for the foreseeable future and (try to contain yourselves) (c) make Northern Gateway a literal pipedream.

More importantly, and perhaps more impossibly, it established the requirement for an entirely new form of government at both the federal and, at least in B.C., provincial levels. In order to make anything work, both levels of government are going to have to remake themselves to become more reasonable, forward-thinking, collaborative, conciliatory and respectful. In other words, both governments are going to have to grow up, act like responsible adults who don't always get their own way and truly represent all of the citizens of their land and residents of their province.

In other words, it's hopeless.

Long before there was a Canada, when lands we now call Canada were the Savage Wilderness, the British Crown cared a great deal about Empire. They didn't care so much about nation building in the far-flung lands they considered their Empire, they really only cared about mercantile interests, the wealth of natural resources — beaver pelts and such — the Savage Wilderness might provide, Britain itself having pretty much exhausted what few natural resources the islands had except coal and pluck.

They realized their only hope of successfully raping the riches of the Savage Wilderness depended on reasonable relations with the people who already lived there. They didn't particularly want to be friends with the natives or anything like that. Their desire for peaceful coexistence hung less on altruism and more on math — the natives in the Savage Wilderness outnumbered them by several orders of magnitude and if they'd collectively had a lick of sense would have killed them all and burnt their wooden ships to the waterline every time one of them showed up.

But the natives were more civilized than that.

To curry favour, the Crown used gifts, bribes, alcohol, pomp, circumstance and something called the Royal Proclamation of 1763. Among its other fine points, the Proclamation promised to secure ancestral lands for native use... after, naturally, the carpetbaggers took everything they wanted.

It was the kind of generosity that led the British to embrace the French after they'd whipped their butts on the Plains of Abraham instead of sending them back to the old country.

No one really knew what the Proclamation meant and as history unfolded, it seemed to pretty much mean the Euros could take anything they wanted, relegating the natives to more and more marginal land, making their lives even more of a living hell than it already was and tricking them into signing land treaties swapping all of it for Nunavut, so to speak.

Except in British Columbia.

For reasons I don't know, B.C. Bud perhaps, the various native groups in B.C. didn't sign land treaties. Successive provincial governments pissed away opportunity after opportunity to engage in meaningful treaty talks, choosing instead to roll the dice and hope an approach of benign neglect and outright oppression would suffice. Virtually all the bands in B.C. kept saying, "It's all ours; it's all ours!" while the provincial governments simply responded, "Yeah, whatever," and did what they pleased.

In 1983, B.C. gave a licence to log land west of Williams Lake. The Tsilhqot'in objected, claiming aboriginal title to the land. Aboriginal title isn't like whitefolk title. Its metes and bounds aren't precisely measured and described and filed on paper in some official office anywhere. It lives in the descriptions and stories of the band's oral history and, as such, isn't — or at least hasn't been — recognized by whitefolk or their courts.

And so it was in the lower courts that heard the case.

But the Supremes disagreed, said the Tsilhqot'in did have title and, more importantly, described how First Nations people can prove ancestral title. They also said the province breached its duty to consult with the Tsilhqot'in before handing out the logging licence, much in the same way a provincial court recently said the province failed to adequately consult the Lil'wat and Squamish people before approving Whistler's OCP.

Given there are hundreds of B.C. bands claiming something like 110 per cent of the entire province, you can see how this might have some important implications for the future of, say, Christy's LNG strategy, piping bitumen across land claimed by a number of different bands, building more monster homes in Whistler and, well, just about everything.

So after this round of Canada Day festivities is over and we all get back to work, what does it all mean?

No one knows for sure. But it certainly means the B.C. government can't keep operating the way it has been. It can't keep kicking the land claims can down the road, especially if that road crosses land claimed by one or another First Nations group. It means the old way of doing business is over and we'd better be smart enough to find a new way or there isn't going to be any way forward at all.

And hopefully, it means we're going to stop mindlessly exploiting and exporting our natural resources. Maybe it'll open the door to getting serious about adding value to our logs, our fish, our minerals, our supplies of energy. Maybe it'll dawn a new day in the way nativefolk and whitefolk and brownfolk and otherfolk get along with and treat each other.

The days of circling the wagons are over, people.