George Mallory was a paradox. Nothing in his many youthful adventures suggested a natural addiction for altitude. Yet, he spent much of his life trying to get higher.
Mar 4, 2011 5:28 AM By: G.D. Maxwell 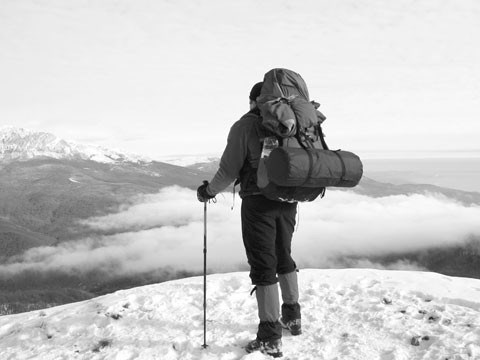 George Mallory was a paradox. Nothing in his many youthful adventures suggested a natural addiction for altitude. Yet, he spent much of his life trying to get higher. That he failed more often than he succeeded didn't keep him from becoming the second most well-known mountaineer in the early-mid 20th century, Mallory's first paradox.

In the early 1920s, he was a member of the first two British expeditions to Mount Everest. Neither succeeded. The third expedition, in 1924, may or may not have summited. No one will ever know and, in mountaineering circles, it will remain one of those delicious topics endlessly argued about over cups of fortified tea. Did Mallory and his partner, Sandy Irvine, make the summit and die on the way down or did they only come close before whatever stopped them left them lifeless in the uncaring ice for the next 75 years? Whether Mallory was coming or going was his last paradox.

But what he's best known for, more enigma than paradox actually, was likely nothing more than a throwaway line. Asked why he wanted to climb the world's tallest mountain, he famously said, "Because it's there." While on the surface, the answer is about as deep as the generally accepted retort to the question, "Why did the chicken cross the road?" it captured the mystique of mountaineering and, by expansion, the unknowable quality of any intensely personal human endeavour. It was, to most of the 20th century, what "Whatever!" has come to mean in the post-literate world of the 21st.

Had Mallory given the matter some deeper thought he might have explored the real paradox of mountaineering. That delicious, confusing feeling of meaningless omnipotence climbers experience when they've successfully - or unsuccessfully for that matter - drawn on reserves of strength and will to get them to a place requiring more of both than most people ever manage to harness, only to discover, at the apex of their accomplishment, their own insignificance, their own grain of sand on an endless beach quality in the gigantic natural world they've just scaled. It's the reason so many climbers shout into the void from atop their goal: It's a shout only they can hear.

But, as you've probably guessed, this isn't about Mallory or mountaineering.

It's about asphalt. And it's the last words I'll ever write about the damnable stuff. I'm so fookin' tired of hearing about it, arguing about it and watching it open a deep crevasse in this community, I'd gladly trade it for dirt roads and dusty parking lots.

The argument between the small, but vocal, group who want the plant moved at any cost and the mayor and - at least for the time being - majority of council, brings to mind another classic paradox: the irresistible force and the immovable object.

In the annals of philosophical navel gazing, the argument over what happens when an irresistible - unstoppable - force meets an immovable object has helped many a bored philosopher pass many an uneventful evening. Delving into theology by asking whether God might not be capable of creating an object so heavy even God couldn't lift it, and, after all, if God is omnipotent, why couldn't he/she create such an object, notwithstanding there would be nothing a force so great as God couldn't move (insert head scratching here), the game of call-and-answer was largely, and unfortunately, put to rest by quantum mechanics and a deeper understanding of the nature of the cosmos.

Which doesn't solve the dilemma of the asphalt plant at Cheakamus but sure goes a long way towards explaining why it isn't going to be solved as long as the two sides continue to entrench themselves deeper and deeper into their respective positions.

And frankly, my dear, at this point I no longer give a damn.

The mayor and enough councillors, municipal solicitors, senior staff and others believe they are protecting the best financial interests of the community by ignoring the plant's lack of proper zoning. To enforce the zoning and make Alpine Paving move its operations would be, in their opinion, to expose the taxpayers to substantial damages. Why? It wouldn't be strategically prudent to discuss that.

Those who want the municipality to enforce its zoning and make the plant move - both residents and others who simply believe residential expansion trumps heavy industry, regardless of historical use - think the muni's hiding something more sinister and can give Alpine the boot with impunity and no financial jeopardy. There are, of course, duelling legal opinions on both sides.

I think we need to find another strategy. I'm not interested in facing another whopping tax increase nor am I unsympathetic to those wanting the plant moved. But instead of fighting each other, I think they ought to bring their energies to bear on the actual target of their irritation. Nudge, nudge, wink, wink.

But I'm retiring from the fight. In writing about it last week, I chose some words I wish I hadn't chosen. I awkwardly left one train of thought and embarked on another. In doing so, I left an impression that Ken was acting out of some kind of self-interest. Nothing could be further from the truth. As far as I can tell, Ken is the only person even less self-interested than me. I've never known him to be motivated by anything other than what he honestly believed was in the best interests of the community and I apologize to him for implying anything else.

I also wish I'd have left out any reference to believing Ken was lying. I put it in and took it out half a dozen times and ultimately made a bad choice. I don't believe he was lying. I do believe his legal advisors stretched the plain meaning of "legal costs" beyond the breaking point. Their very generous interpretation of legal costs was good enough for the town's insurance underwriters and good enough for the mayor and was, in his opinion, the means to a desirable compromise. That's the way things are done in the grown-up world and as distasteful as it might be to me, it wasn't a lie. Again, Ken, I apologize.

In case you're wondering, there was no threat, no compulsion behind this. I offer it because Ken's a friend and I admire the work he's done for us all over the years. I've supported him in the past and, given what we know about the current mayoral wannabes, I'd support him again if the election were tomorrow.