MAXED OUT: Not council’s finest hour 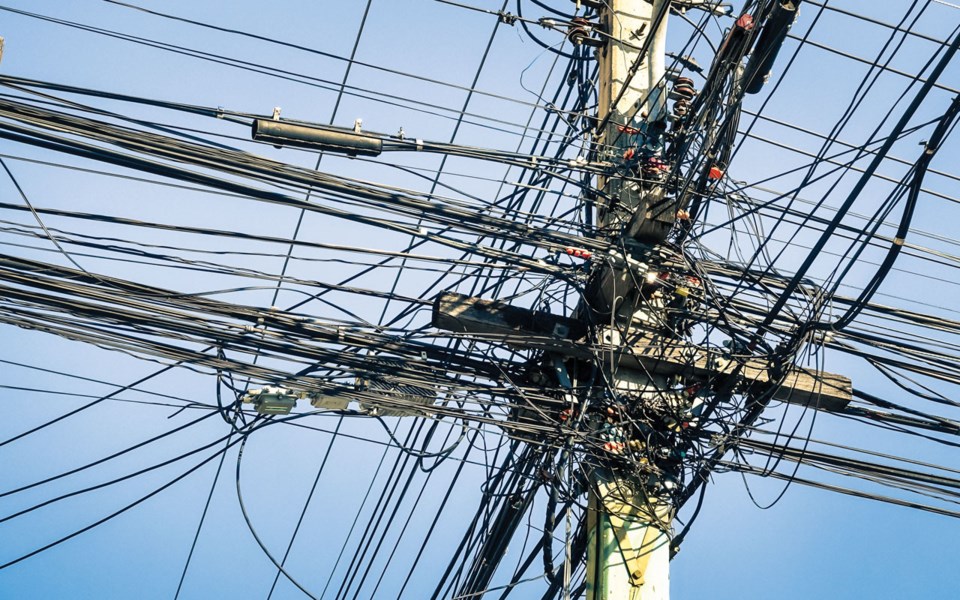 Other than breathing a long sigh of relief, I’m not going to comment on the ongoing drama playing out south of the border. There’s too much of that elsewhere, written by folks who are just guessing and rehashing what’s already been speculated. The man-child prez will never admit defeat but will eventually be evicted from the White House. Good enough for me.

So, following the mantra of all politics being local, let’s parse the most recent gut-wrenching decision made by council—the green light for proceeding with the project to underground utilities in White Gold.

Firing up my Wayback Machine, I’m reminded of an experience long ago when I was the youngest lawyer in a prestigious firm in a small town in southern New Mexico. The most senior partner was a wily, rangy gent who favoured cowboy boots, string ties and an aw-shucks attitude that masked a brilliant legal mind.

He had an upcoming state Supreme Court hearing, on a matter the details of which I frankly can’t remember. But he’d had my nose in law books for several weeks exhaustively researching the current state of the law germane to the case.

When the day came to discuss it with him, I wasn’t looking forward to the exchange. The law was not on his side. He queried me on all the relevant points, put his feet up on his desk and contorted his face into an expression of deep thought. After an interminable period of time, he spoke.

Before my brain re-engaged, I blurted out, “You’re kidding!”

He proceeded to school me on the difference between law and equity, legalspeak for right and wrong, fair and unfair. He gave me a primer on the importance of challenging unfair laws, that being the only way to begin to chip away at them and get them changed through the legal system as opposed to the legislative route. I left the meeting humbled... but feeling sorry for him and his upcoming hearing.

He took me out for a beer after he’d won that case and changed the law. Lesson learned.

Watching the questions and comments of our councillors pondering the White Gold matter, it’s clear many of them were overly concerned with the procedure outlined in the Community Charter as it pertains to local area service initiatives. It is also clear they missed Mr. Hallisey’s early clarification of that section of the Charter when he said, “Council is not compelled to move forward under the Community Charter. Council has to decide where and how to use municipal resources.” He summed up by underscoring it was not mandatory to approve this initiative but was up to council’s discretion.

Congratulations to Councillor Jen Ford for hearing that part.

This is a bad decision for many reasons. First, let’s dispose of the straw men. This project is, as BC Hydro recognizes, a beautification project. It is about aesthetics and it’s driven by gentrification. The money Hydro is going to kick in, about 15 per cent of the project’s estimated $5.5-million budget, is coming by way of a BC Hydro Beautification Grant.

The specious, additional rationale for the project is safety—reduced wildfire risk—and reduced risk of power outages. When asked if there had ever been a wildfire in Whistler started by downed power lines, the answer was no. And, as a resident of Rainbow, built a decade ago with underground utilities, I can assure you our power has gone down several times because of interruptions that took place well outside our neighbourhood.

So it’s about the visual pollution of power poles and lines, folks. Oh, and the belief of some that having them underground will enhance their property values.

Before touching on the more troubling issues of unfairness, let’s be clear on one point: Council could have killed this initiative without doing any violence to the Community Charter. Since the muni has to foot the initial cost by borrowing funds from the Municipal Finance Authority—paid back by additions to homeowners’ property taxes over the next 30 years—Council could have simply voted to not borrow the money. Case closed.

Since the cry is often heard that some on council and staff are concerned about the totality of the RMOW’s debt level and the effect it may have on Whistler’s future ability to borrow, that would have been a sound reason to decline. After all, this isn’t about putting sewers in where none exist. This is about spending millions to beautify a neighbourhood by bringing utilities where utilities already exist. Triaging local needs, that seems to be pretty far down the list.

From a fairness perspective, White Gold isn’t a strata. It’s one of Whistler’s oldest neighbourhoods. There are people who live there who have been here long enough to have stumbled home from The Boot pub back when it was almost the only game in town. They are, like so many of the town’s early residents, house rich and cash poor.

Many of those neighbours don’t live in White Gold. They just own homes there. The neighbours who started this process weren’t able to get 50 per cent on side in time. They were granted an extension, the rationale being COVID-19 may have delayed international mail.

Perhaps worst of all, they’re not concerned they really have no firm budget for the project. They have what was termed a pre-conceptual budget. Some of them are concerned if that budget balloons—not like that ever happens in Tiny Town—they may have to re-petition the neighbourhood and run the risks of a vote to pull the plug. If that should happen, no one is sure but it’s very likely the muni will eat approximately $850,000 of costs for the first phase, the one during which they’ll discover the real cost.

With significant opposition within White Gold, such an easy way out, no real budget, financial hardship for some, no real need other than vain aesthetics, an unknowable financial future, a pandemic continuing to rage, this decision was not Council’s finest hour, Ms. Ford excepted.

We were hoping for better from you.