There was an eerie feeling heading into the village last Sunday, a stillness in the air. The roadblock at Nita Lake Lodge was abandoned, no police, no security personnel.
Mar 5, 2010 6:26 AM By: G.D. Maxwell 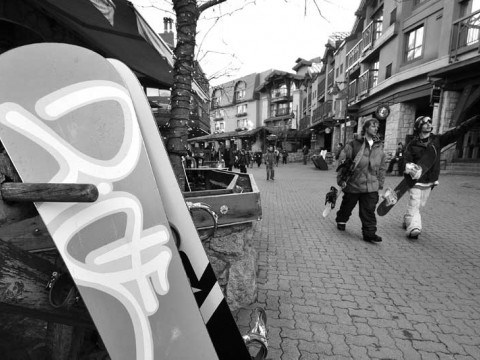 There was an eerie feeling heading into the village last Sunday, a stillness in the air. The roadblock at Nita Lake Lodge was abandoned, no police, no security personnel. The white barn encroaching on the bend in the road where they checked the undersides of cars for bombs was unmanned and unwomaned. A varied thrush warbled its metallic trill as if to announce my arrival on the lifeless street.

The corner of Lake Placid and 99 looked like a Twilight Zone set. The dozen police, whose Olympic duty seemed to consist of anchoring each corner, keeping people from crossing the empty highway until the light said it was permissible and taking turns doing whatever they were doing in their comically, if unkindly, named pigloos had simply vanished. So had the handful manning the barricades at the Whistler Way parkade at the other end of my trip.

Finally, I spotted two OPP officers loitering outside the conference centre looking tired and bored, perhaps daydreaming of finally getting to go home and sleep in their own beds. For the first time in a month, they looked out of place.

It was a new day. The last day. The day before the day we'd begin to get the village back to a semblance of whatever normal will be in the upthrust wake of the biggest hangover to ever hit town.

The Seekers' So Long, It's Been Good to Know Ya kept spinning in the jukebox in my head, a wistful auf Wiedersehen to those being swept down valley by the reality of their return trip to the real world, wherever in the world their reality awaited.

The Village Stroll was swept clean of debris but had the look of well-worn carpet, beaten down, shoe shuffle dirty and sorely in need of a refreshing rain and a couple of days of warm sunshine bleaching.

The people I saw looked tired and partied-out. Most bore a striking resemblance to the "Before" pictures in ads for detox spas, all except for a clutch of revelers still going strong, singing and arguing boisterously in an Eastern European language I didn't recognize but tend to classify as coming from one of the moose-and-squirrel countries spawned by the meltdown of the Soviet Union, though for all I know they could have been bouncing Czechs.

The CTV crew - Motto: No Sentiment too Sappy - seemed less poofed and primped than they had earlier in the week. A gofer muttered conspiratorially to another low level grunt about needing to run down to the store for cucumbers because the on-camera personality had bags under her eyes the size of steamer trunks.

All in all, things looked exactly like what they were, the morning after the night before.

All, that is, except for the dancing smurf, grooving to music only he heard. Performing between the Longhorn patio and the gondola corral, he danced like a man who'd lived through all the wacky dance crazes of the '60s, '70s and '80s, knew 'em all but couldn't decide which one to perform so simply segued through their moves randomly with an overall effect of advanced Parkinson's.

He was a sight to behold. Wearing a jacket several sizes too large, he looked as though he'd been dragged behind a VANOC SUV like some kind of human parking lot sweeper. He'd obviously been sleeping in his blues and quite possibly in a puddle somewhere. His beaded dreads and scruffy beard spoke of a man with a casual relationship to personal hygiene.

When he saw me, he hesitated, missed a beat. Picking up the groove, he danced in my direction. Wearing one of the most comprehensive collections of credentials I'd seen, he looked like one of those U.S. interstate trucks with license plates from many states riveted onto its bumper.

Much to my horror, he also looked familiar.

J.J. Geddyup, Whistler's perpetually unemployed private eye, was either undercover or had finally gone over the edge he'd danced along for so many years. A shattered soul with more skeletons than closet space, I wouldn't have been at all surprised to discover he'd been arrested in Vancouver as one of the balaclava-clad anarchists fighting with the cops. But a smurf? J.J.? No way. As hard up as VANOC was for volunteers, there was no possibility their scraper would ever reach the bottom of J.J.'s barrel.

"Borrowed it when one of 'em decided to dance naked at Tommy's. Guess I just wanted to fit in with the rest of the herd."

I'd been eyeing the rack around his neck. They looked legit and the pictures seemed to be of him although in one of them, an out of place black-and-white, he was dressed in swimming trunks and was standing on a dock somewhere next to a sizable marlin hanging by its tail.

"Here and there. I'm not entirely certain what they all mean but they've gotten me into every place except for the tent where they have the tablecloths and crystal over at the finish line for the ski races. They're kind of picky over there."

"Can't imagine why. Heads of state, captains of industry, in-bred IOC members. Hell, it's one of the few places you'd fit right in," I opined.

"I fit in everywhere," he said, resuming his dance and fanning his credentials out like so many playing cards.

"Hey, isn't the red one a Whistler Canada House pass?"

"And no one ever questioned you? No one wondered what you were doing there among the big time pols and Olympic bigwigs?

"The Privileged Ones, dude. The rich and powerful we gave up our library to wine, dine and impress?"

"Never saw any. Only people I ran into there were local councillors and senior staff. Hell, I thought it was a muni canteen... although now that you mention it I do remember seeing some ex-councillors there too. Maybe the movers and groovers weren't there when I was eatin'."

"Maybe... maybe. So what are your plans now that the madness is over?"

"Same as everyone else. See what happens. See who survived and who didn't. See what our local leaders do for an encore now that they're moving from being Very Important Hosts to being the ones trying to dig this place out of the financial bomb hole the Games have left behind."

"What are the chances?"

"Better than the alpine skiers... not nearly as good as the hockey teams."