Retreating into silos not the answer

As though we needed further proof of the impending demise of civilization, Abba is back.
May 2, 2018 6:00 PM By: G.D. Maxwell 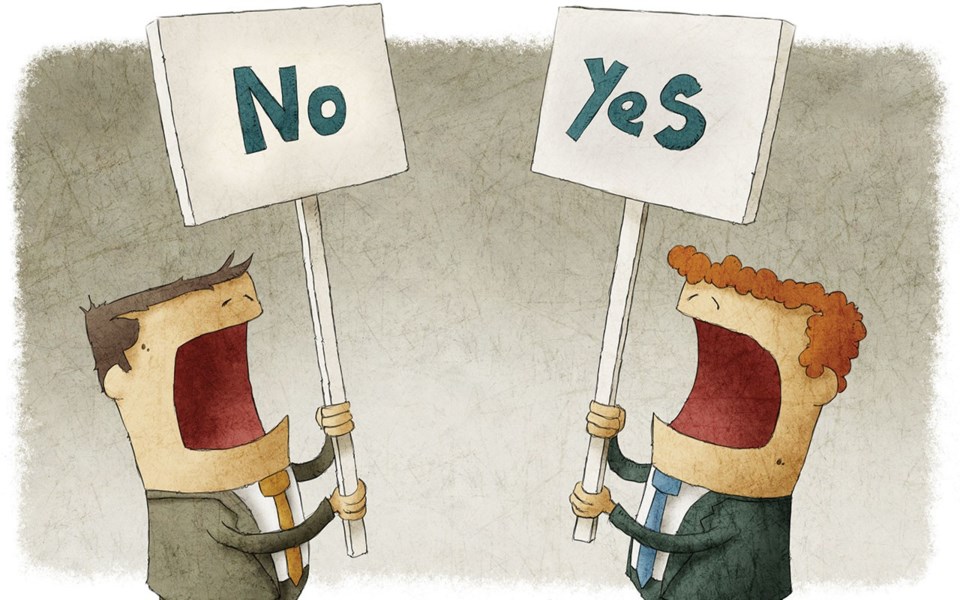 As though we needed further proof of the impending demise of civilization, Abba is back. The Swedish pop confection responsible for more people stepping outside and lighting up at wedding receptions than half-drunk, sobbing fathers of the bride droning on about their little girls growing up, has been in the recording studio and is threatening to tour, as though wildfires, floods and plagues of locusts weren't enough to ruin a summer. Sweet Jesus, save us from ourselves.

But as pernicious as Abba's earworms are to the jukebox in my brain—just writing their name has launched Dancing Queen ricocheting around my synapses for possibly the next few hours: make it stop; make it stop—one need look no further than our geographical next door neighbours, and ourselves, for further evidence of civilization's demise.

The fine folks of Alberta are at it again.

Even though Alberta, land of ranchers, northern cowboys and wildcatters, didn't share the violent, gun-slinging history of the American Southwest, I can't help but thinking there was a vast fear that swept over the territory about the same time it joined the Canadian Confederation in 1905. Somewhere, still far away but coming fast, was the onslaught of the horseless carriage. Hundreds, perhaps thousands of buggy whip artisans and wagon manufacturers faced a grim future at the hands of those eastern bastards and their foul-smelling automobiles.

Now, it's the oil business facing, well, certainly not extinction but fundamental change. For starters, its desperate scramble to get the dilbit to tidewater bears an uncanny resemblance to the perennial scramble to sandbag the Red River—futile, but what else can you do?

The ultimatum delivered by Kinder Morgan reeks of desperation, the kind of desperation a business feels when it wants to get out of a bad deal or find a sucker investor to take on the market risk they've realized they're facing. Enter the bizarre alliance of Kermit Trudeau and Rachel (NDP in name only) Notme, both of whom have been dropping hints the way bunnies drop jelly beans that they may be willing to underwrite what Kinder Morgan is realizing is a nonsensical investment. Never doubt governments' willingness to throw good money after bad.

Don't believe me? Exhibit A: Site C dam. Exhibit B: B.C.'s recommitment to LNG. Both given new life under Premier Clark, oops, Horgan. Proving, once again, Albertans aren't alone in the western boat that couldn't float.

Kermit believes the only way to get his touted federal carbon tax is to placate Alberta. The only way to placate Alberta is to get tough with B.C. and push through the pipeline. He reasons blowing up the rest of northern Alberta's tarsands and running uneconomic shiploads of dilbit through the Port of Vancouver is the only hope Canada has for meeting its Paris emissions targets. While I wouldn't go so far as to add that short line of reasoning to Orwell's war is peace, freedom is slavery, ignorance is strength, it ... well, maybe I would.

Ms. Notme, of course, has simply lost her mind. But then, you would too if you had Thumper Kenney breathing down your neck. Just ask the premier of Ontario, who has Doug Ford breathing down her neck. There's a picture for the "what's been seen cannot be unseen" file.

This danse macabre must be placed in context though. And that context is, for better or worse, the good people of Alberta. Now, I have friends and relatives living in Alberta and while I consider them reasonable people for the most part, there are, shall we say, blind spots in their field of vision.

Their unwavering commitment to the declining business of oil and gas is one and I fully understand their position on that, given the outsized percentage of their economy it represents. After all, I have an unwavering commitment to the declining business of skiing and I'm not enough of a hypocrite to fail to see the absurd environmental frivolity of the very thing that underpins our happy mountain home. On the continuum of crimes against the environment, encouraging people to jet in from all over the world to ride machines to the tops of mountains in order to slide down for fun falls somewhere closer to benevolent than sucking bitumen from sand ... but has far less economic utility.

And I'll never be as empathetic towards Albertans as I'd like to be until they grow up and come to the realization that a provincial sales tax is not a form of genocide. At least part of the province's political leader's obsession with foisting more bitumen on the world can be laid at the door of their unwillingness to incur Albertan's wrath by bringing in even a modest sales tax. Better choking deficits than that.

But their tribalism has reached new heights with their kill-the-messenger reaction to the announcement the University of Alberta plans to bestow an honourary degree on David Suzuki, Canada's own Al Gore ... without the whole politician thing.

Outraged alumni have threatened to withhold donations to the university if they move ahead with their plans to grant the degree and have Dr. Suzuki give an address at the June 7 convocation. While it may have something to do with Suzuki having said the tarsands have to be shut down a couple of months ago, I suspect it has as much to do with the general backlash people have towards messengers bearing inconvenient truths. For every voice that tells people they have to change the way they live there is another voice, in the case of Alberta, Jason Kenney, who responds, "Make Alberta Great Again," or words to that effect.

Nobody wants to give up on a past that was good to them. And the era of cheap gas and uncaring pollution was good. It was easy. It was guiltless. It was also self-destructive and mindless but those qualities never got in the way of anybody having what they thought was a good time.

The university administration says they stand on principles, and somehow conflate this battle with academic freedom. Those threatening their ongoing financial support say they too will stand on their principles, tantamount of which is self-interest, although they choose not to be so honest as to come right out and say it.

As is always the case with blind tribalism, humanity is the ultimate victim. However this melodrama plays out, the underlying fabric of Canada will be weakened as we retreat to our provincial silos and accuse each other of, at best, indifference.

It will only be worse with an Abba soundtrack.