Saluting the best barbecue around 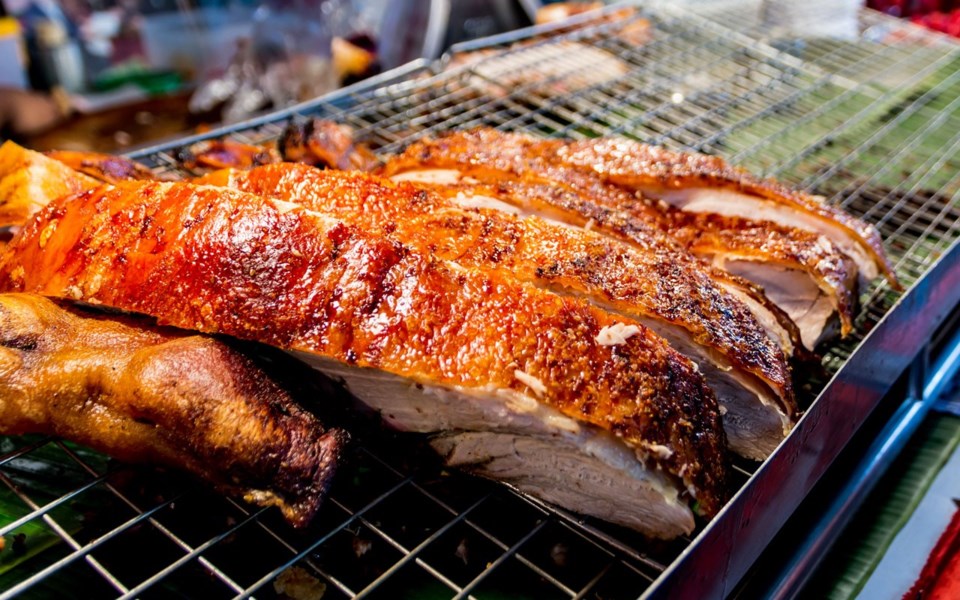 The swine is a noble animal. To wit:

Pigs and ponies, pigs in pokes.
Pigs in stories, pigs in jokes.
Pigs got tails, curled all around.
I like mine cooked nice and brown.

I wrote that ill-advised verse to woo a cowgirl studying agriculture at a university I was attending. It never occurred to me a girl who grew up on a cattle ranch might be a vegetarian. It was a lesson in the politics of food and, thankfully, the last time I ever wrote verse other than a successful attempt to rewrite the world's filthiest limerick as a haiku, an exercise I'm certain Pique's editor would not wish me to share on this page.

A famous French foodie—no, I don't remember his name but that doesn't mean I'm making this up—once commented, in French naturally, "The pig is but a giant dish which walks while waiting to be served." Of course, up until the 19th century, pigs roamed the streets of Paris freely. They efficiently disposed of waste Frenchmen were too delicate to dispose of themselves but not too delicate to produce and toss into the streets, if you get my drift.

"Keep Paris beautiful," was actually a marketing slogan used to urge Parisians to keep pigs, thus reducing the city payroll for sanitation workers. OK, that last part I made up.

At that point in history, the swine had pretty much overcome the earlier defamation it suffered at the hands of Jews and Muslims. And while I fear to tread on the sacred views of others, I'm not sure I can completely cozy up to anyone who willingly foregoes pigmeat for reasons so spurious as religious proscription. Please, no hate mail.

Anyway, to get back to pigs, if it weren't for American immigrants with names like Hormel and Oscar Meyer, and most definitely without Upton Sinclair having written The Jungle, swine would probably have risen to the top of the food chain, meatwise. But forces including the rising popularity of hot dogs, the waste-not-want-not mindset of meatpackers, and a string of exposés following The Jungle, gave rise to the unfortunate phrase that called into question all things porcine, to wit: "Everything but the oink."

"Everything but the oink" described the parts of the pig that went into sausage making. Not your good, Old World kind of sausages, but your cheap hot dogs. "Lips and peckers" was a cruder description of the same thing. A real turnoff, foodwise. Even for a pork lover. Though not as off-putting as turkey dogs.

But pigs have pretty much wallowed their way back into the hearts of meat-eaters and onto the tables of finer dining establishments. And why not? You never hear stories of Mad Pig disease. Modern breeding methods have yielded pigs with less fat, more muscle and the best tasting ribs any animal could ask for. Today's swine are lean, mean, eatin' machines.

Which gets us around to Whistler's impending swinefest.

For a couple of years in the mid-'70s, I supplemented my meager summer income and student loans with an annual Autumnal Equinox swine roast and keg party. Several of us lived in a large house in a rural area on the fringes of Albuquerque, N.M. There was a more or less abandoned apple orchard out back, ringed on two sides by irrigation ditches. A more perfect place for a sizable gathering of drunken college students was inconceivable.

Like so many good ideas, this one came to us in a moment of diminished capacity. "Let's get a couple of kegs and roast a pig out back and charge admission," someone said. "Good idea," someone else answered. And thus a legend was born.

It probably would have been a good thing if one of us had had the presence of mind to say something to the effect of, "Wait a minute. None of us knows diddly about roasting a whole pig." But no one did.

So the day before the Equinox, we dug a shallow pit. We built a superstructure to spit and hand-turn a full-grown pig. Right away, you can see how stupid an idea this was. That's because you're a lot smarter than we were at the time.

We dipped into our student loans and bought five kegs of really cheap beer. How cheap you ask? Coors. One step up from Lone Star.

We'd posted signs at strategic locations around the university announcing the party, gathered enough wood to roast the pig or burn down half the neighbourhood, secured both the swine and a whole lot of helpful advice from an old Chicano butcher nearby and were feeling pretty smug about the whole thing.

The party was Saturday. We started roasting the pig on Friday. It was a lot harder than we imagined. During the course of staying up all night and manually cranking the pig spit, we drank most of one keg.

When only a handful of people had shown up by mid-afternoon Saturday we started to get worried. It looked like we were going to take a bath, financially, and have more leftover pig than we'd know what to do with.

But by the time the pig was ready — a guess on our part — the orchard was starting to look like Woodstock. Security had broken down about a hundred people ago but we'd recouped all our outlay and were feeling pretty flush.

Beer was flowing, music was playing, merry was making and a general feeling of well-being washed over the crowd.

Then we announced the pig was ready.

Have you ever seen an army of ants attack a dead animal? People fell on the roasted beast with utensils no more sophisticated than fingers. In less than 20 minutes, there wasn't much left but bones and many of them were being gnawed. Discouraging words like, "IS THAT ALL THERE IS?" were being heard. The crowd was getting ugly.

A timely arrival of more beer soothed the savage beasts and everything more or less worked out the way we'd hoped. Except our arms were really sore for days after.

The next year, we enlisted the help of a Hawaiian friend and did two pigs in a pit, Hawaiian style—canned pineapple. I'll spare you the details and say only that drunken college students aren't too picky about the internal temperature of the meat they eat. I'll also say never trust a Hawaiian who can't provide proof that he knows what he's doing when it comes to pit-roasting pigs.

Experience won't be a problem this long weekend. Some of the best barbecue cooks will encamp at Dusty's for this year's Canadian National BBQ Championships. Swine will rule the weekend and if you go, you'll understand this love letter to the noble pig.