In a perfect world, I’d be waxing eloquent about what an incredible start to the ski season it’s been. I’d still be high as a kite from last Sunday’s powder extravaganza on Whistler Mountain.
Dec 7, 2007 7:18 AM By: G.D. Maxwell 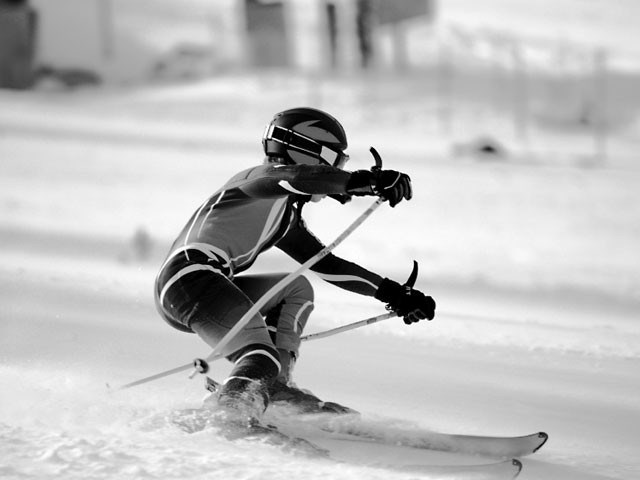 In a perfect world, I’d be waxing eloquent about what an incredible start to the ski season it’s been. I’d still be high as a kite from last Sunday’s powder extravaganza on Whistler Mountain. Goosebumps still form remembering the uncharacteristically light, fluffy, ethereal quality of snow that, on many runs, was above my knees and, often as not, teasing and freezing my face as I floated through run after run, capping it all with a final descent down the widened and somewhat de-spirited Lower Franz to Creekside.

Of course, in a perfect world, it wouldn’t have rained to the top for most of the last 72 hours.

But that’s just the way things go in this little corner of paradise. Get snow, get rain, get freezing temperatures… get your skates sharpened cuz you’re going to need them.

In a perfect world, the thing that’d have my shorts twisted into a knot right now might be the tragedy the upcoming Olympics have visited on Ptarmigan. When I moved to Whistler, lo those many years ago, Ptarmigan was my favourite run on the mountain. I wasn’t a good enough skier to boast that Whistler Bowl or Christmas Trees or Harvey’s or something steep and scary or treed and twisty was my favourite run. Ptarmigan was about as good as it got for me; the rest — the best — was still a couple of hundred days of fallin’ and learnin’ in the future.

Ptarmigan was, in those formative days, perfect. It started with a gentle, bluish pitch. It meandered over and around bumps, rollers and a couple of blind rises. Its tree islands offered choice and mystery — stay left where the groomers had run; go right where the snow was loose and often lumpy; meet up again on the other side of the trees. The long last pitch was the steepest, fastest and often most deadly part of the run. From a wide start with such different and distinctive features on skier’s left and skier’s right you might think you were on two different runs, Ptarmigan narrowed, fell away again then twisted around and led you to the genteel, sometimes painfully slow Black Chair.

The only thing I ever broke skiing — ribs — I broke on Ptarmigan.

Mostly though, it will forever have a place in my heart as the run where I learned to love skiing in fog. I have this theory about Whistler skiers. If you ski here all the time, you might be forgiven for not noticing how high the overall quality of skiers and boarders really is here. If, however, you go someplace else and keep your eyes open, the difference is quickly apparent. Whistler skiers, especially in the shoulder seasons when most of the people on the mountain are locals and near-locals, are really good. It might be the sort of people this town attracts, might be the limitless steeps, might be magic. But I think it’s the fog.

A day without variable visibility is like a day somewhere other than here. If you want to ski in Whistler and ski often, you’ve got to make your peace with skiing blind. Ptarmigan is where I made my peace. It’s where I learned to stop relying on my eyes and start listening to my feet. It’s where I learned balance trumps everything else when it comes to staying upright on skis. It’s where I discovered the quickest route to being a better skier: unbuckle your boots and ski blind. If you can get on top of that trick, the rest of the mountain just seems to flatten out a bit; speed seems easier to handle; bumps become smoother; trees suddenly open up.

So that was me the other day, dropping to my knees on Ptarmigan, doing my best Charlton Heston, last scene from Planet of the Apes impersonation. “Those fools! Those goddam fools! They finally did it!” Okay, so it wasn’t nuculer Armageddon. It wasn’t the end of humanity as we know it. But to see the devastation wrought over the summer was a jaw-dropping experience.

What had been a beautiful, soulful intermediate run now looks like an interstate highway. Trees? Gone. Features? Neutered. Personality? Think Barbie on barbiturates — still kinda nice to look at but, well, lifeless.

I guess the racer boys and girls need a featureless run to train on. But the death of Ptarmigan will not do anything to curb my general disdain of all things ski racing.

In a perfect world, discovering the soul stripped out of Ptarmigan would be an inconsequential, if infuriating, distraction. But this isn’t a perfect world. And losing a favourite run on Whistler Mountain isn’t the thing that’s keeping the peace-on-Earth, goodwill-towards-men, festive holiday spirit from becoming my reality.

A dysfunctionality has crept in and taken hold of the latest crop of powerbrokers that was probably foreseeable but is nonetheless baffling. I keep expecting to trip over empty alien pods or the desiccated corpses of people I know who’ve been bodysnatched.

The latest installment of internecine warfare may portend, as rumour has it, a house revolt that’ll eventually play itself out a year from now when the big prize is the mayor’s chair during the most VIPped party on the planet. Already we have a disillusioned bidniz group who have a jones to give councillor Nancy her walking papers, this notwithstanding the fact she outpolled everyone who ran for anything last time around and is the candidate most likely to do that again a year from now since her voting record seems to be a more accurate reflection of the villagers’ sentiments. We have a split council who’ve now begun to take things personally when any councillor who disagrees with the — slim — majority breaks rank and says anything other than the agreed-upon podspeak. We have a mayor who’s becoming more incapable of brooking dissent which, given his historic role as Dissenter-in-Chief, only adds gravitas to the bodysnatcher theory.

And, as a body, we have council who doesn’t seem to want to pull itself out of the flat spin it seems to have gotten itself into by playing Father Knows Best on the budget guidelines. Since budgets are the thing most often responsible for wholesale changes at election time, this bizarre behaviour seems almost Bushian in its self-destructiveness.

Instead of challenging staff to develop simultaneous budgets reflecting a 6 per cent increase — the current 4 to 3 vote guideline — as well as a rate-of-inflation increase, they’re sticking to their guns and hoping everyone will buy into the unsubstantiated conclusion that an inflation budget will require cuts too draconian and not in keeping with the quality of resort they’re determined to deliver in 2010 and beyond.

Seems like a queer kind of open and transparent government to me… but what do I know.