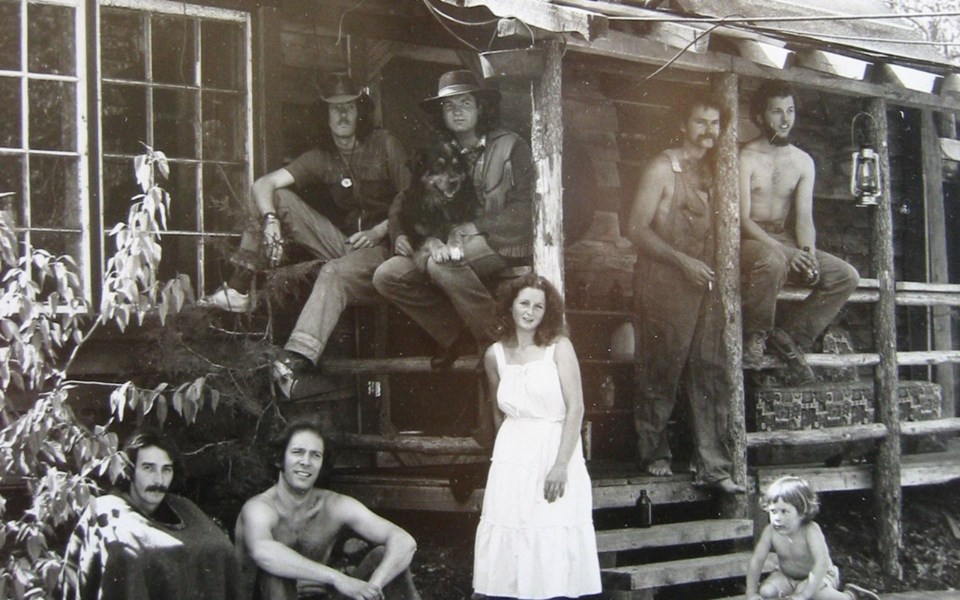 While Charlie Doyle was squatting down in Cheakamus, hand-drawing the ever-satirical Whistler Answer and driving the straight folk batty, his artisanal abode had the benefit of distance from the nascent village of Whistler and didn’t draw the kind of heat some of the other squatters did—like the party animals up at Soo Valley or the higher-profile squats along Diversion Creek.

Andy built the first house in Whistler Village. The fact it wasn’t yet Whistler Village and he built it on Crown land, without benefit of either permit or title was neither here nor there. Who was he going to upset? Bears at the nearby town dump?

Born in Sherbrooke, Que., and raised in the Magog area, Andy skied at Mt. Orford, Sutton and Jay Peak. In 1971, he was itching to ski something bigger and decided Aspen was the place to go.

“Somebody mentioned Whistler, said I should check it out because the powder skiing was great. I came out in a beat-up old MGB and when I got here, I had $5.35 in my pocket. I got a job chopping firewood and for three weeks, never saw the mountains because everything was fogged in. When the fog finally cleared and I saw the mountains, I thought this place was incredible,” he says.

But he did build that first house in what would become Whistler Village. He lived in it for five years with some friends. It cost him $50 to build, using scavenged material from the dump and spending most of the hard cash on roofing material.

You can’t build a good house without a good roof. Andy’s was, by all accounts, a good house, at least until the clock ran out on the squatters in 1979. Then Andy’s first house became the first house to be burnt down by the first fire department in the first resort municipality in Canada. It was in the way. Of progress.

The house—it was really too nice to call it a squat—sat on Diversion Creek near the original course of Fitzsimmons Creek, just about where the skateboard park is now. Andy built it because it was easier than finding housing in the autumnal scramble for a place to rent. Besides, that’s what he did—built homes for Frans Carpay’s Alten Homes Ltd.

“We had some pretty interesting parties while we were there. Usually, we had one big party every year. A lot of people in the valley, Hughie Smythe, Ann Chiasson for instance, probably remember our parties. They usually lasted about three days. There was a big bathtub full of punch, whatever got dumped in, and bands and huge bonfires. The parties went on for three days; they were quite an event,” he says.

Ted Morden remembers the parties at Andy’s house. So does former Mayor Nancy Wilhelm-Morden. They weren’t exactly Andy’s neighbours, but didn’t live all that far away, on the other side of the dump, around the mountain a bit. Right near where Andy built Whistler’s first $7-million-plus house a little over two decades ago.

Along Crabapple Creek, near today’s bridge to Sunridge from Brio, is where Ted decided to build a cabin. “It was a good location,” he says. “The kind of land that would fetch a million bucks these days.”

Ted had come to Whistler from Kitchener, Ont., in 1973, lured by tales of some guys he’d known in high school who were here, working in the bush. “It was wanderlust, the hippie thing, not going on to the next expected thing,” as he describes it.

In an old Oldsmobile, Ted undertook what he remembers as a “fear and loathing” tour across the U.S., up California, north to where he finally ran out of road.

At the end of August, Nancy flew out for a visit. She and Ted were high school sweethearts and when Ted told her he was sticking around Whistler for the ski season, it wasn’t long before she decided that idea sounded better than her already-made plans to attend university back east.

Ted logged, Nancy pumped gas at the Union 76, and they immersed themselves in the lifestyle of the day—dances at Mt. Whistler Lodge, movies at L’Après, parties everywhere. And nightmare landlords. During a trip home that first Christmas, their landlord “moved” them out.

In the fall of 1975, Ted built his cabin out in the woods. It was partially a back-to-the-land thing, but it was also the answer to the housing crunch. “And it was entirely his idea,” Nancy interjects. “I remember thinking, we’re absolutely nuts, going to live in the middle of the bush, with no hydro and no toilet and no shower.”

That Ted didn’t know how to build was not a detail to worry about. Starting in the fall and often working with frozen boards, the two of them managed to cobble together a cabin and outhouse almost in time for winter. Over the years, it took on homey touches, a candle-burning chandelier, house plants, kerosene heater and, or course, a car stereo run off a battery, all the comforts.

Including bears. “We had bears, obviously. The creek was our refrigerator in the summer. We kept our cooler in the creek. This one bear caught on to the cooler and would knock it over and eat whatever was inside, then we’d fix it and fill it back up. We pretty much trained him,” Ted recalls.

When the squatters on Crown land were being evicted, Ted took the step of contacting the owner of the private land he and Nancy had built on, asking permission to stay just a bit longer. The owner’s lawyer wrote back saying, “No way.” But as Nancy recalls it, living in the squat allowed her to finish university part-time and made it possible for the two of them to save enough to buy a lot in Alpine where they still live today.

It’s hard not to enjoy the irony of who these “undesirable” squatters are today. Lawyers, builders, small business owners, realtors, people who have made significant and lasting contributions to the fabric of this community.

It’s even harder to imagine what, if any, contribution the people who parachute into today’s mega-million dollar homes will be seen to have contributed to whatever Whistler becomes 40 years from now.