One week ago, I was whipped. Beaten. Broken. Tired of rain, tired of cold, gingerly walking across ground swollen with water and capable of holding no more, I gave in to sloth and re-lit the furnace at Smilin' Dog Manor. The early morning temp was 7.
Jul 11, 2012 9:00 PM By: G.D. Maxwell 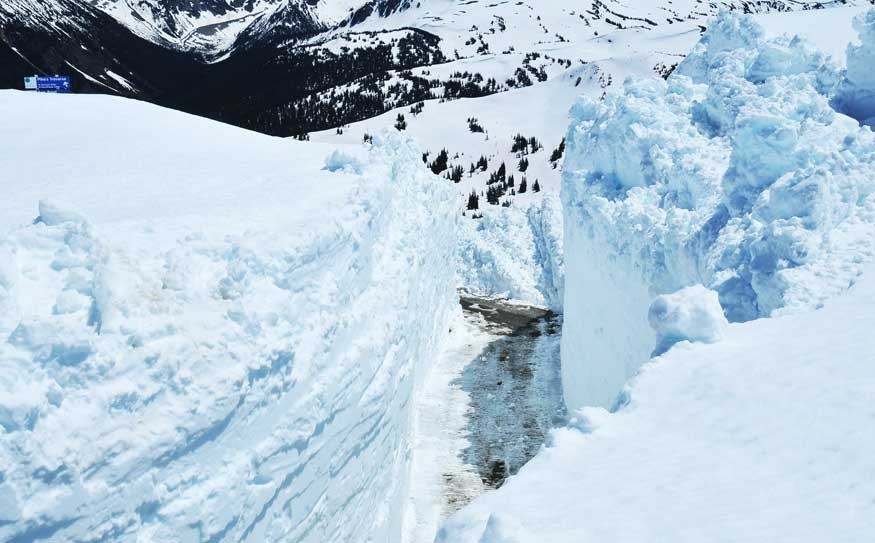 Snowball fight? There is something like 30 feet of snow up on Whistler. Why not make the most of it on this hot summer day?

One week ago, I was whipped. Beaten. Broken. Tired of rain, tired of cold, gingerly walking across ground swollen with water and capable of holding no more, I gave in to sloth and re-lit the furnace at Smilin' Dog Manor. The early morning temp was 7.5°C. It was July 3rd. I couldn't face another frigid morning fumbling with kindling to light a fire in the fireplace to warm up the chill in my normally cozy living room.

The next day the temperature soared into the mid-20s. Two days later it touched, ever so briefly, 30°C.

On the way back to Whistler several days later, I toyed with testing the AC as I drove through Lillooet — temperature 28°C. I finally tested it when I hit Emerald and marveled that at 30.5°C it was warmer in Whistler than Lillooet.

And so, summer came in the guise of a heat storm, our seasonal equivalent of a massive snow dump. I suspect it won't stick around too long and if it doesn't I'm superstitious enough to blame the people I've heard actually grousing about it being too hot. Too hot?! I don't think it completely inappropriate at this point to say we should be able to force such people out of town. Tie a bag over their head, put them on a plane and force them to land in the mid-day sun in, say, Ottawa. You want hot?

I will concede there is enough heat outside to warrant caution in writing this week's column. While the preferred form of education in Whistler is still a smokin' topic, avoiding it this week can be seen as a public service. Ditto the continued flawed policies of Generalissimo Harpo, the global economic collapse and, of course, the killing heatwave in the power-short eastern seaboard of the U.S.

I had the extreme good fortune to grow up in the southwest U.S., a land of unlimited sunshine, very little humidity, no biting insects, and altered-reality landscapes. What seems to pass now for killer heat was, there and then, just another summer day. Of course, the average person wasn't rendering an extra 50 pounds of lard a couple of generations ago but....

The two most valuable lessons I learned growing up in a hot climate was how to order cold beer in at least several different languages and no matter how hot it is, there's always a couple of good ways to cool down.

So, being the public-spirited kind of guy you've come to expect, I will offer you heat weenies Max's 10 best ways to beat the heat in Whistler.

1. Go jump in a lake. If you're fond of crowds, do it at Rainbow Beach or Lost Lake. It'll seem even cooler if you're nekkid and let the water evaporate as you lie in the sun on the dock at Lost Lake. If you're really hot and don't mind the shrinkage, Green Lake is always a thrill, although if you're a young, childless guy, you might want to bank some sperm first.

If you're one of those people who believe they have to suffer before they've earned their pleasure — a backcountry skier for example — hike up to Rainbow Lake for a quick dip. It'll take all day and when you get back to town, you can look into some therapy.

2. Have a snowball fight. There's something like 30 feet of snow up on Whistler. Grab a bottle or two of white wine, take a couple of beach chairs up Blackcomb or Whistler, find the nearest snow patch, bury the wine, make snowballs and pelt the snot out of each other. If you head up Whistler, take a garbage bag along. No community service or anything like that, but if you hike over to Harmony Bowl you can have the ride of your life on a little bit of strong plastic. Just don't expect ski patrol to show up.

3. Ride the wild white water. Hot weather melts snow, Duh. Melted snow runs down mountains, double Duh. Surf is up on every river around town. Local rafting companies will gladly show you how to take advantage of this freak of nature with wild rides and serene floats down those snowmelt water raging rivers. Discover why wetsuits are called what they are, jump in for a cool float and enjoy the best roller coaster ride without those annoying rails or safety bars to keep you in place.

4. Eat ice cream. Health Canada urges adults and especially children to make sure you get your minimum daily allowance of ice cream during hot summer days. Yes, ice cream is fattening. But you can counter the pudge factor by turning it into a competition. If you're right handed, hold the cone in your left hand and vice-versa. Blindfold yourselves and lick away. First one down to their fist wins. At least your tongue won't get fat... just cold.

5. Crash a pool. Lake swimming isn't for everyone. But not everyone has a pool. The best pools to crash include the Chateau Whistler, Pan Pacific and Four Seasons. Walk nonchalantly into the lobby and straight to a washroom. Change into your bathing suit, put your clothes into a swish bag, say, Lululemon, and pretend you belong. Attitude is everything.

6. Go to a movie. Okay, this is pretty cliché, admittedly, but it's dark and cool and if you can stomach the popcorn smell, not a bad way to kill the hottest hours of the afternoon.

7. Slow down, relax and enjoy something tall and cold. Whistler has a multitude of patios where large, corporately-logoed umbrellas have all but replaced last week's patio heaters. Some of the best waitstaff anywhere in the world are waiting to serve you a variety of numbingly-chilled beverages. Each and every one of them understand when you say, "Otra cerveza, por favor."

8. Ride a bike. I know, it seems like exercise but with the wind in your face and skimpy spandex on your body it's only hot when you stop. Just be sure you stop at one of the lakes mentioned in number one or one of the patios just referred to and you'll be fine.

9. Read a book. Whistler's library is our version of big cities' cooling stations on hot days. Grab a book, magazine or librarian and relax until it's patio time.

10. Wait for the sunset. If you're hard to please — or cheap — and none of these ideas appeal to you, just grump around until the sun goes down. The air cools off quickly when the sun goes down and sooner or later we all get a good night's sleep. Just think about those poor, misguided souls in Toronto sleeping in a pool of their own sweat.