Pride—not the kind people march about—has always been considered the deadliest of the deadly sins, the sin from which all the other deadly sins spring forth.
Oct 13, 2019 4:05 AM By: G.D. Maxwell 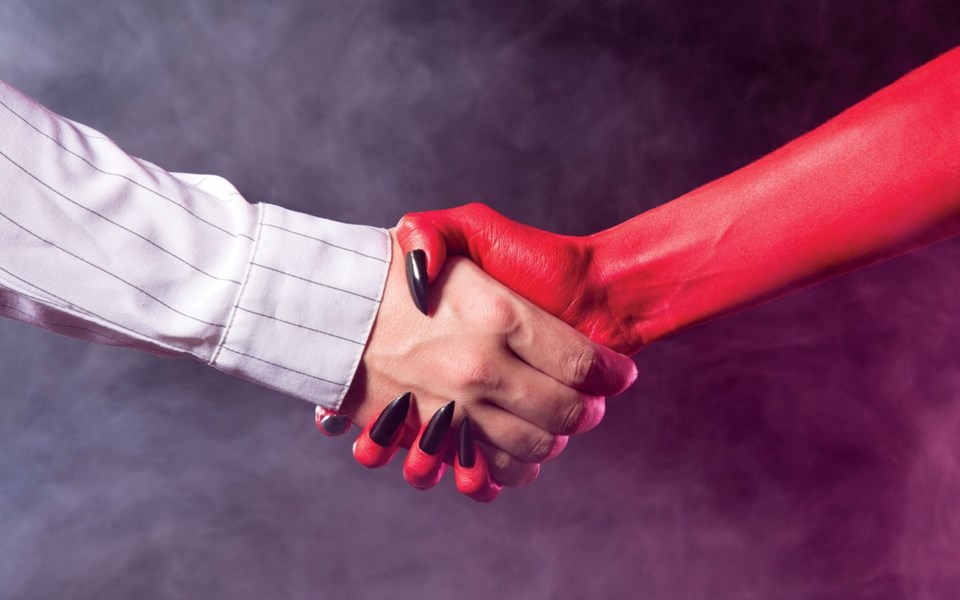 Pride—not the kind people march about—has always been considered the deadliest of the deadly sins, the sin from which all the other deadly sins spring forth. There are seven deadly sins, in case you were wondering, so clearly pride is a busy sin.

While I've feasted at the table of many of the deadly sins, pride has rarely been one. In a perverted, ironic kind of way, I've always prided myself on my overall lack of pride, if that's not too much like the snake eating its own tail. I've also generally been proud of my easy facility with admitting when I'm wrong. Of course, when you've had as much practice at being wrong as I've had, that's probably not an accomplishment to be proud of, and I've had a lot of practice since I let it all hang out in public every week.

I've been hanging things out in public on the back page of Pique now for 24 of the 25 years it's been around. I can say without a shred of pride I never expected to last this long. Three, four weeks, tops. Hell, I didn't even expect to live another 24 years 24 years ago.

While this would be a good way to introduce my last column, don't get your hopes up. I'm not done yet. But this being kind of an anniversary, if I had champagne, I'd open it. If my shoulders still moved like shoulders are supposed to, I'd push a hand far enough around to pat myself on the back. If I had any sense at all, I'd retire before I get sued again. If I had a dollar for every column I wrote ... well, I guess I do, so just forget I started that sentence.

But it's not like I have a lot of dollars for every column I've written, notwithstanding those who might think I'm slightly overpaid and all those others who can't believe anyone's crazy enough to pay me at all for this piffle.

So, where am I going with this? Oh yeah, I remember. Deadly sins. Greed, is another deadly sin, the sin of desire. I don't usually embrace greed, something I consider obvious since I live in Whistler and have worked at jobs paying less on a real dollar basis than the first job I had in high school, but what the heck, I'm getting old enough to wonder what it'll be like if and when I ever really retire. I mean, other than CPP and OAS, the back page of Pique is my most valuable asset. I don't have the wherewithal to do greed with enough panache to turn anyone's head that doesn't drink Sterno out of a paper bag. There's obviously only one option open to me.

I have to sell out.

That's right, I'm selling out. Abandoning my scruples—which when combined with $7.50 will get me a loaf of bread at Purebread—selling my soul, buying into the North American Dream, grabbing all the gusto I can get.

I've given up on winning a lottery and not sure I can wring one more raise out of Pique. Not as much swag seems to come my way these days and most of what I've gotten in the past is showing its age.

So here's the deal: Maxed Out is for sale. You may have noticed the total lack of advertising, sponsorship or branding on Maxed Out in the past. Silly, silly scruples. Twenty-four years of opportunity lost.

But no more. Starting next week, OK, maybe the week after that, Maxed Out is open for business. The product-placement business. I'm not really sure how this ought to work. Nothing so vulgar as ads or logos but blatant, if transparent, name dropping.

Not just anything or any name, though. That wouldn't do. Let's see, what do I need, er, want? I guess a market home is out of the question. Think! Let's be methodical.

If your business doesn't fall into any of those categories, I'll consider cash. On second thought, I'd rather leave the CRA out of this. No cash.

How would this work, I hear you asking? Well, for starters, and using the only real skills available to me, I'd carefully weave repeated references to your business into my usual witty epistle. For example:

Sliding into my favourite seat at (your bar name here) I ordered a tall, cold (your beer/spirit name here) and pondered what had been a perfect day hucking cliffs on Whistler Mountain. "Unbelievable," I thought. I never could stick that landing until I got my new (your skis gloriously plugged here)!

Sauntering out to my (your luxury electric car here), I was shocked and dismayed to see (name of politician or prominent person you want to slander here) boinking his/her personal assistant in the back seat of a ratty old jalopy whose owner hadn't had enough sense to lock the doors.

I laughed out loud, saying to no one in particular, "Well, at least they had the good sense to use (your brand of condom here)," and suddenly finding myself ravenous, toddled off to (your restaurant name proudly plugged here) for a quick but satisfying nosh before returning home to watch the Big Game on my new plasma TV just delivered from (major electronics chain, no doubt, mentioned here). Ain't life grand?

OK, you get the picture.

Obviously the soft-sell—product placement—might not cut it for all of you interested in taking advantage of this unique marketing opportunity. I feel your pain. Your concerns are my concerns. I'm sure we can work together.

For those of you who just have to be more, how shall I say this, out there, I guess I have to be open to straight up advertising, maybe a tasteful banner ad at the bottom of the page or a display ad instead of the graphic that usually accompanies my column. Of course, that's going to cost you big but just think about what you'd be getting. Informal market research has shown that nearly three out of every four Pique readers read Maxed Out first! More astonishingly, a full 95 per cent of them read at least the title if not the actual column. And the online numbers are even better!

So let's hear it from you punters out there. This offer isn't going to last long. Once I have a sponsor in each category, that's it, no more deals. Pick up that phone right now and call Pique; they know where to find me. (Your bar's name here) no doubt.

See how easy it is?