That is the magic of 'The Way' 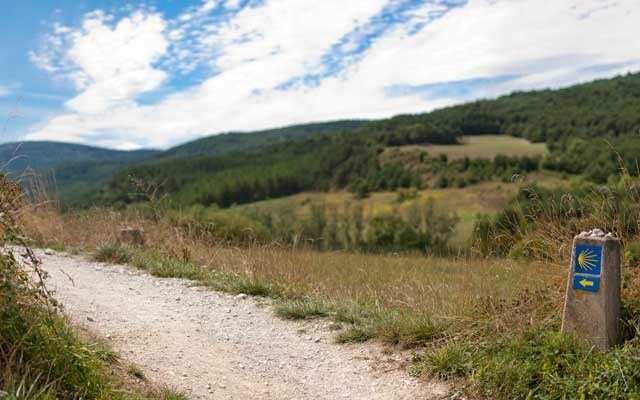 Ole barren land, wearisome land, whichever version of the song you prefer, it is an apt description of much of the first half of the Camino de Santiago in northern Spain. I can't speak to the second half, but by the time this is published in Pique it will be just a memory of tired, cramped leg muscles and I'll be celebrating in the city of Santiago de Compostela. I'm not expecting the nearly 400 kilometres still to ride to be appreciably less barren or wearisome but we shall see.

This path, frequently called The Way, is a pilgrimage trod by several hundred thousand true believers every year. I don't know how many true believers there might be in our little entourage of 14 Whistleratics, but no one seems to take offence at my non-belief, and most seem here for the bike ride, the celebratory spirits at day's end, the camaraderie, the food, the adventure, the exhaustive high of long days overworking legs and lungs. I feel safe in saying spiritual enlightenment is nowhere near the top of anyone's list.

And certainly not the Penance.

If you are among the true believers, you can earn a Penance for following The Way. And like all such deals offered by the OneTrue Church, you can get it at a discount. While the modern Camino runs 800-plus kilometres — from Roncesvalles to Santiago de Compostela, further if you begin somewhere on the other side of the French-Spanish border — one need only walk 100 km or bike 200 km to earn one's Penance, duly evidenced by the issuance of a compostela, or certificate of accomplishment.

But I'm getting ahead of myself.

I am not a pilgrim. Truth be told, I'm not really a mountain biker either. But here I am, on the pilgrim's route, on a mountain bike, pedalling across northern Spain in pursuit of, well, that remains to be seen. My motivation is domestic bliss; my hope, adventure; my fear, a permanently tortured posterior now oddly, but not unexpectedly, shaped like the mould for a bike seat. Ouch.

At the beginning of the ride, on a cold, drizzly day, an employee at an ancient monastery issued my credencial. A credencial is a passport of sorts for those travelling The Way. It grants access to inexpensive overnight accommodations in refugios along the route, an unnecessary detail since we are staying, for the most part, in hotels far removed from the sardine-like accommodation I've seen in some refugios we've passed.

I was probably issued my credencial reluctantly. The form I filled out asked my religion. "None" was as low as the hierarchy of recognized religions went. Atheist, Druid or devil worshiper were nowhere to be seen. The question embracing one's reason for following The Way began with "Spiritual." While it did manage to embrace both "Athletic" and "Cultural," Idle Curiosity was not an option; nor Domestic Bliss. Nonetheless, I was credentialed.

Even after reading and re-reading their definitions, I have absolutely no idea what the difference is between an Indulgence and a Penance. And I don't honestly care. To eventually receive a compostela, one must affirm one's pilgrimage was motivated by religious reasons. In that case, the pilgrim receives a certificate attesting to his or her accomplishment and avowing he or she has visited the sacred temple of St. James for the sake of pious devotion. Bada bing, bada boom, Indulgence granted.

If, on the other hand, one has made the pilgrimage for non-religious reasons — idle curiosity, domestic bliss, tortuous bike ride — one gets a certificate of completion, the Camino's runner-up prize. I therefore failed to qualify from the get-go. The certificate of completion won't even get you a spray bottle of water to cool the fires of Hell, so if the mumbo jumbo of Christian orthodoxy is fact instead of myth, my goose is cooked, so to speak.

Besides, I already tasted Hell on the second day of the trip. Notwithstanding the cold drizzle referenced several paragraphs back, the first day's ride was a piece of cake. Largely downhill — with a couple of lung-busting exceptions — and on a smooth if terrifying road, the 44 or so kilometres to Pamplona slipped by in what would prove to be a relative blink of an eye. I mentally high-fived myself for actually spending time on a bike before starting the trip and shrugged off whatever was to come with a devil-may-care, "Bring it on."

Tourist propaganda for the Camino is not all that dissimilar to tourist propaganda for Whistler. A quick perusal of Tourism Whistler's promotional information unwaveringly shows people having the time of their lives skiing deep powder under glorious blue skies. The reality... well, we know what the reality is.

The second day began with an endless, but not steep, uphill climb, part municipal road, part smooth trail, under slugbelly grey, threatening clouds. This quickly gave way to a much steeper climb and reintroduced me to a phrase that made me hate mountain biking in the first place — hike-a-bike. Hike-a-bike is a euphemism for pushing and/or carrying a heavy mountain bike up a narrow, rocky, scree slope best traversed in full belay or, alternatively, being helicoptered to the summit while porters schlep your bike up to you, risking death or injury. It was the first near-vomit experience in a day just brimming with opportunities to practice hiking a bike, cursing under one's breath and plotting to maim guides who cheerfully and repetitively said: "It's all downhill from here," which it was, at least until the next nosebleed uphill. A graph of the altitude gains for the day looked remarkably like an EKG of a heart attack patient who flatlines right at the end.

I'd like to say things have gotten easier but if I did, I'd open myself up to employing guide-speak. The difference between guide-speak and, say, lying, reminds me of certain theological arguments, for example whether there can be evil done in the name of religion. What I can say is there have been uglier graphs... with still uglier to come. Perhaps praying for salvation would help. Perhaps that is the magic of The Way.