I’m sailing this week. Don’t know if an Internet connection is in the travel plans so this is what can most graciously be called an encore presentation. At least it has something to do with sailing… if nothing to do with elections.
Oct 3, 2008 5:03 AM By: G.D. Maxwell 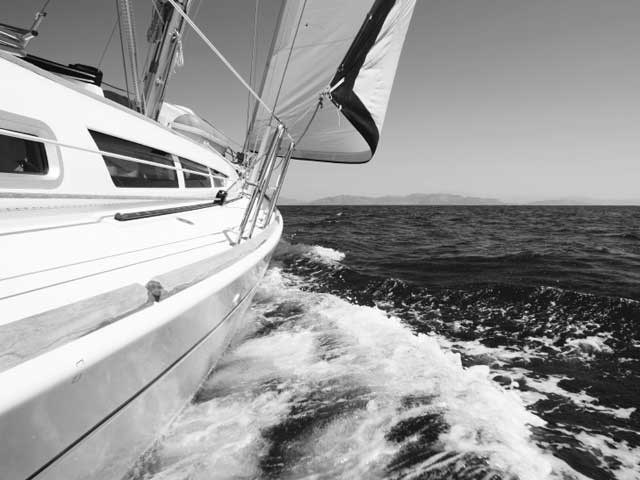 I’m sailing this week. Don’t know if an Internet connection is in the travel plans so this is what can most graciously be called an encore presentation. At least it has something to do with sailing… if nothing to do with elections. Consider it a gift.

A 38-foot sailboat is a joy to sail. A boat that size, with a displacement approaching 12 tonnes, just tends to give a boy confidence. It accelerates to speed almost unnoticeable, flattens out all but deep swells of a trailing sea, and feels rock solid with its leeward toerail nearly submerged. It is for good reason large Cadillacs and Lincolns of a certain vintage are referred to as land yachts.

The boat I’m on is a sleek cruising boat with just enough beam to offer its occupants a bit of comfort below deck but not nearly enough to seem tubby. Under sail it is a joy to steer and a pleasure to ride. At least until the wind starts to blow stronger than 25 knots with gusts into the 30s and non-sailors aboard.

At that point, even the finest of sailing yachts becomes a careening, out of control, unsafety-tested, midway ride, with screaming adolescents and adults turning green and wondering if anyone will notice them tossing their cookies overboard. This is when I really begin to relish the trip, and generally puts me in good stead with the captain, if at odds with the passengers.

August is a capricious month to sail on Lake Ontario. It is not unusual to be becalmed for long stretches of time when the drone of a diesel engine is the only alternative to sitting motionless and cursing your fate. Since even the best diesel sounds like someone’s dropped a handful of various sized nuts and bolts maliciously into the crankcase, running the engine is not just an admission that you brought the wrong kind of boat to the party, it is a form of auditory torture. Motoring is an unmitigated cry of “uncle” when sailing is your preferred mode of travel.

However, whether sailing or motoring, motion of any sort in a large sailboat is preferable to stopping. Stopping a boat is an act of faith almost beyond the comprehension of non-sailors. To state the obvious, there are no brakes on a boat. And unlike a motorboat that enjoys multiple, large propellers each capable of turning different directions and bringing a boat to a stop so quickly you can pop blood vessels in your eyes, sailboats have a single prop that looks a great deal as though it was stolen from the top of someone’s beanie and wouldn’t be able to blend a decent margarita at full speed.

When stopping a sailboat, you are faced with basically two choices: park it in a slip at a marina or drop your anchor. Neither is pretty. Gracefully sliding a large boat into its home slip is challenging enough. Finding and negotiating unfamiliar dockage is almost inevitably humorous and humbling. To much waving of arms and shouting back and forth, you attempt to “feel” your way into a slip without caroming off the boat next to you — whose owner is naturally on board peering intently at your efforts — brushing the rail on the other side or, heaven forbid, slamming into the dock in front of you. Success is never 100 per cent and the wind is never on your side, which is to say it’s always on your side and blowing you into one of the aforementioned perils. This explains why snotty dockhands often look up at you innocently and ask, “New boat?”

The pitfalls of docking are, however, nose pimples compared to dropping your anchor — they are embarrassing but not life threatening. The mere idea of containing the force of wind and current, doing their mightiest to blow a 12 tonne boat onto the Canadian Shield granite of nearby islands, by dropping a 35 pound chunk of metal tied onto three-quarters inch thick rope down into what may at best be a muddy bottom is, well, let’s admit it, ridiculous. Putting your faith in an anchor is like rappelling on dental floss. Sailors inherently sense this. That’s why they place a second anchor just to be safe. Kind of like doubling the floss before you hurl yourself over the cliff, eh?

But all this nonsense assumes you’ve successfully nosed your boat into a sheltered bay where you feel safe dropping your anchor. To even get to that point, you probably have to negotiate water only a few inches deeper than your boat’s keel. Forgot about the keel, didn’t you?

This is where I get to tell you about the only time in my life I believed I was going to drown. It was not on this trip — I prefer to make new mistakes — but on a cruise of Lake Champlain, a lesser great lake lying on the borders of Vermont and New York. We where anchoring in a sheltered bay I knew was a tight fit. The boat I was sailing — a 28 foot Aloha — had no depth finder or, more accurately, had a keel I referred to as a depth finder. Unfortunately, it was a binary instrument, registering only “okay” and “oops.”

Swinging the boat’s nose smartly into the wind to drop the hook, the keel sounded a very convincing oops, grounding itself firmly in the soft marl bottom of the bay. The boat belonged to a woman who ran a no-frills marina and believed motors were for sissies. Therefore, the only option was to try and physically remove the keel from the mud. Now, there are several ways one might successfully accomplish this task. I choose none of them and instead jumped overboard, determined to lift and jiggle the boat off the bottom since it only drew four feet and I was 5’10”.

You can probably see where this is going, but at the time, it made sense. Planting both feet and ducking under the hull near the front of the boat, I heaved a mighty heave. Almost immediately I realized the movement I felt was not the boat rising out of the mud but was, in fact, my feet being driven convincingly into the mud with the full force of my own efforts. I was now in water over my nose with both legs held fast by the cloying bottom. Needless to say I managed to worry both legs free before the air in my lungs expired, but not by a comfortable margin and not before pondering the mirth my friends would have to stifle whenever they thought about how I’d died.