The answer to Canada’s woes: SNOW 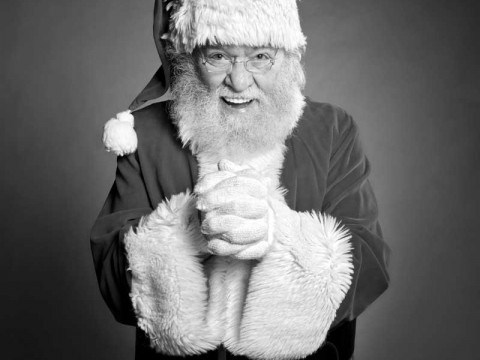 It's beginning to look a lot like Christmas. Just yesterday I saw a jolly fat man all dressed in red being followed about town by a clutch of very small people, possibly elves, nattering at his heels, catering to his every whim and looking like they bore the brunt of all the hard work the fat man could think up for them to do. Santa? Possibly. But he had IOC credentials hanging from his neck. More likely just one of the family.

With enough snow on the mountain to redeem the most savaged soul, enough lights on the trees on Lorimer Road to blind anyone turning onto it who hasn't already been blinded by the reflective glare of the 1,287 orange sticks on the highway between Creekside and the village, and enough good deals in town to warm the heart of Scrooge, this must be time to don our gay apparel, deck our halls, nog our eggs and go through the motions of peace on Earth and goodwill towards men... women too, especially those whose Christmas wish list is topped by the simple desire to compete at the Olympics, just like the, uh, men.

But before we get all seasonally disordered and turn as soft as figgy puddin', let me just take a moment and ask a simple question. If, as the old chestnut goes, the truth sets you free, does that mean Little Stevie Hapless, prime minister of all Canadians, is enslaved? Rumour in the nation's capital has it that the Doughboy's Christmas wish list is topped by the same dysfunctional toy he got last year, a prorogation of Parliament. This time it has nothing to do with a coalition of inept elves threatening to band together and unionize his workshop. It's all about saving face... or at least what's left of it after the Chinese scraped off most of it and served it at a state dinner.

It's becoming more clear every day - and will likely become even more so when Richard Colvin releases his rebuttal to the testimony delivered by the three blind mice - The Weasel knew, or should have known had he been endowed with the curiosity of a flatworm, about operation Torture in the Desert. This is seriously undermining Doughboy's dream of one day leading (sic) a majority government. The Conservative party's popularity is approaching the same percentage of the population who believe, in their frozen, shrunken hearts, Scrooge was a humanitarian.

Reeling from his Chinese takeout, about to be reeling from the warm, perhaps even globally warm, reception he's likely to receive in Copenhagen where, rumour has it he's being referred to as Stevie the Sith, watching his approval rating melt away like snow in the spring while The Weasel continues to pantomime Pinocchio, the Doughboy may have decided when the going gets tough, the tough go home. At least until after the Olympics.

Frankly, I feel I owe the mayor and council an apology. Not really, of course, but I never dreamed they were such role models for the federal Conservatives. They've decided to extend their Holiday Hiatus until the Olympics are over, Stevie's considering proroguing Parliament until after the Olympics. Coincidence? I think not. Maybe that Weston boy's got more drag than I thought. That was a joke, people.

In the normal course of government, this would be an ideal opening for the opposition to gain ground. And if any of the parties constituting the opposition had a leader with more charisma than last year's fruitcake, things might run their normal course. But they don't. So lumps of coal all around. Canada, we're on our own. It's up to all of us individually to convince the world we're not environmental terrorists, prisoner torturers and buffoons. Thank goodness we still export comedians; maybe we can convince the rest of the world it's all just one big joke.

Okay, that's it. No more discouraging words. Back to POE, GTM. Anyone want to sing a carol? No. Well how about a reprise of Rob Boyd is God?

Coming oh so tantalizingly close to winning last April's 72-Hour Filmmaker Showdown at the World Ski and Snowboard Festival, the brilliantly myth-making video, describing how Whistler's favourite son dug out the very valley we live in with his "own bare hands," will be acted live(ish) on Saturday evening, 7 p.m. at MY Place. So will the other 14 songs that join it in the musical theatre extravaganza SNOW .

Just as Whistler is all about snow, SNOW is all about Whistler. It's about the mountains, the people who come to live, play and work around them, good guys, bad guys, forces of evil, forces of redemption, love, honour, betrayal, life, death, competition, winners, losers and the indelible spirit that creates special places like this and keeps them going in the face of adversity.

Commissioned as part of Whistler's commitment to the Cultural Capital of Canada program, the task was to create an original theatrical work about this place. Like cold fusion, the allure of golf and why exactly leftover stew tastes better than it does the day you make it, I'll never understand why they got a hold of me to pull this project out of the fire. But they did. And I'll be the first to say my major contribution was to drag Lisa Richardson - who'll probably kill me for turning the spotlight on her - into the fire with me. She brought Leslie Anthony along, who just happened to have an idea for a Whistler play already percolating in his amazingly talented brain.

After the paramedics got my heart beating again, I learned to like the idea. What the heck, musicals are especially popular when times are tough and in January of this year, times were demonstrably tough. Of course, they need music to really be successful. And boy, does SNOW have music.

Leslie brought Grant Stoddard along. While Grant knows everything there is to know about kinky sex - see Working Stiff: The Misadventures of an Accidental Sexpert , Grant's memoir of his time spent... oh hell, just read the book - it turns out he's also an incredibly talented songwriter, as is Leslie.

After a year of hard work, boisterous arguments and vegetarian dinners, we've got a script, Anthony and Stoddard are a songwriting team about to give Lerner and Loewe a run for their money. And lucky you can see the results of this effort Saturday night when a troupe of actors from Vancouver will mount a workshop performance, a staged reading, of the play and music.

Don't believe it's great? Check it out for yourself. All the music's up at this site: http://www.whistlerculturalcapitals.ca/index.php?option=com_content&view=article&id=103:snow&catid=2:explore-upcoming-events-&Itemid=79 .

Click, listen, come on out. It's even free. How's that for a Christmas present?