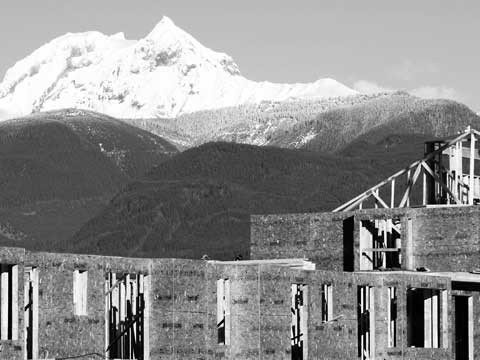 There's no snow on top of the local mountain, won't be for months. I'm about to plunge back into the 8 th Ring of Hell - Phoenix, where they're "enjoying" record heat, which is to say in excess of 110°F - before turning the car north and punching "Home" into the GPS. I haven't worn long pants since sometime in July and probably won't for another couple of weeks. But I'd gladly trade for the cold mornings, too-frequent rain and shoulder season angst of Tiny Town as I complete my Backyard Barbeque Brainstorm workbook.

"What are the (5) most important issues facing Whistler in the next 10 years?"

Growth : We've lived somewhat comfortably under an umbrella of limited growth for years now. The bed unit cap has been that umbrella and as we begin to bump up against it we're likely to discover, more and more, it doesn't keep the rain out.

Developers aren't going to disappear because we've reached some arbitrary limit. They'll keep coming, sniping at lands just outside municipal boundaries like some recent developments. While there's nothing immoral, illegal or inherently wrong with that, it's a dilemma for the town: ignore it or expand to incorporate it and, thus, grow. Outlying projects leech, for lack of a better word, off the town with no commensurate property taxes. The pressure to expand is hard to resist but growth is growth however you achieve it.

Whistler Standard : I'm still not sure exactly what this is but I do know it makes everything we do, from bus stops to roadwork, very expensive and therefore poses the question, can we afford what we aspire to become?

Whistler 2020 : As a planning document, Whistler 2020 is a great piece of work; the town can be rightly proud. As a lens through which to view decision-making, it is a useful filter. But as a set of directives that can't be breached, it is a dangerous straightjacket.

All plans, even the best ones, are a snapshot of a moment in time. They embody the goals and desires of the planners; they are aspirational. But they are also, or should be, living documents capable of adjustment to changing realities. We wouldn't follow the best map over a washed-out bridge just because the map said it was the way to go. Or would we?

Ad Hoc Planning : Yet, despite an award winning plan, despite all the strategic planning undertaken in the past decade, we never seemed to get around to updating the Official Community Plan and continue to make - or attempt to make - long-term decisions on an ad hoc basis. Which leads to a big honking bus terminal in a place we probably wouldn't have wanted it had the issue been addressed earlier, a massive bunfight over a piddly asphalt plant and other examples too depressing to mention.

Revenue/Expenditure Gap : By definition, the municipality doesn't spend more than it takes in. But we're doing a terrible job of controlling costs and living within what most people in town think of as a reasonable budget. Recent budgets passed by the last two councils have "dealt" with this by raising property taxes, stiffing reserves, passing special two-year Olympic budgets, convening blue ribbon panels, conducting bogus surveys and generally doing just about everything short of reigning in costs. A day of reckoning is a'comin'.

"What actions should we take to address these issues?"

We need an open, raucous dialog on whether we (wo)man the barricades and fight to the death over the bed unit cap. Maybe it still makes sense and maybe it doesn't. But unless we have the SLRD and our First Nations partners onside and a rigid strategy to manage corridor development, we're fighting a losing battle. Losing the battle will mean seeing more and more outlying developments from Squamish to Pemberton and the sprawl all too familiar in the rest of North America.

If it's a losing battle we're fighting, we'd better figure out how to avoid taking too many casualties. This may mean abandoning the notion Whistler can simply grow to a certain size and manage to sustain itself indefinitely. This one's going to get ugly before it even begins to get pretty.

The other four issues are really a single, multi-headed serpent. In many ways, they address the question - what do we want to be when we grow up? It assumes, of course, we're finally adult enough to begin to address that question.

One of the signal accomplishments of Whistler 2020 was to get a significant part of the community involved in the planning process. And while there continue to be task forces that meet annually to update the elements of the plan, one of the failures of the planning process since day one has been the disconnect between outlining the kind of community we want to be and the means by which we achieve and pay for those goals. We asked the question - what do we want to be? - but we never asked, nor were we ever asked, the followup question: how do we pay for it or can we even afford it? That question was left up to municipal staff to figure out.

Maybe, as in the case of the asphalt plant decision Tuesday, the action we need is no action at all. A moratorium on action. A time-out. Such a step was taken early in Whistler's history by the province. All development ground to a halt while presumably cooler heads figured out the best way forward. Maybe we are at another point like that in our history. Not exactly a blank piece of paper exercise, but something - unlike the current OCP exercise - that isn't constrained by what's come before, isn't all forced through the funnel of any existing planning document.

There's a big difference between updating, fine-tuning, something like Whistler 2020 and scrapping it altogether; I'm not advocating the latter. But this step needs to be messy, it needs to be inclusive, it needs to be less tightly controlled by council and staff, it needs to reflect the shared vision of the community in this post Olympic reality.

"What prevents action from being taken to address these issues?"

Only our own inertia and the daunting prospect of carefully examining a few sacred cows.

"What is the most important question facing the community of Whistler?"

Whether we can put aside our petty differences, become interested in something other than our own, narrow self-interest, and work together to create the community we'd like to live in. In a town devoted to hedonism, it's probably Quixotic to advocate people develop a vision beyond their own bottom line, their own self-interest. But very little good gets accomplished when too many people are only looking out for themselves. The collective is always stronger than the individual.