Last night, my Perfect Partner got down and dirty for me. Using nimble fingers and a time-tested technique, she reached into the damp darkness and searched until she found the hard, rapidly-growing… potatoes! Really, get your mind out of the gutter.
Aug 8, 2008 9:21 AM By: G.D. Maxwell 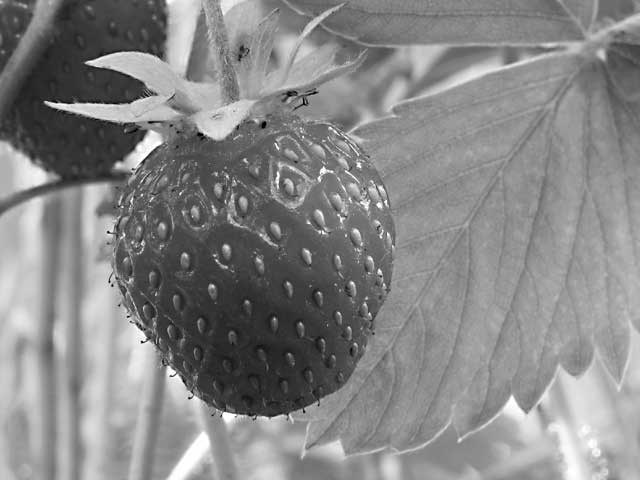 Last night, my Perfect Partner got down and dirty for me. Using nimble fingers and a time-tested technique, she reached into the damp darkness and searched until she found the hard, rapidly-growing… potatoes!

Really, get your mind out of the gutter.

They were small, red skinned and, if you listened carefully, still anthropomorphically screaming from having been filched prematurely from the nurturing roots of their indifferent mother, who remained upright and proud, flowers in her hair, basking in the long rays of the last sunlight of the day. A couple of minutes later, they were washed, diced and sautéing to perfection along with an onion, red pepper and a couple of ears worth of corn kernels labouriously removed from the cob they’d grown on.

The corn was from Washington state. The onion and pepper were from B.C. The chives were from a few steps closer to the kitchen than the spuds. The only well-traveled ingredient in this local-fest feast was the olive oil which spoke with a decidedly Italian accent. Bellissimo, baby. But until someone starts growing olives in Osoyoos, this is about as local as I can get.

Local — whatever that means and, trust me, as with all things commercial, it doesn’t necessarily mean anything as simple as, well, local — is the new holy grail in the world of food. Local is the fountain of youth, the G-spot, the politically correct way to eat, the salvation of Earth, the way of the future now that the future is the past, and a newly-found source of both status and bragging rights. Locavore, ugly as sin in print, conjuring up as it does neighbour eating neighbour, was last year’s word-o-the-year.

Local is fresher, better, more sustainable, greener-than-green, and the quickest way known to man to whittle down your food miles and lessen your carbon footprint. More to the point — speaking strictly from a hedonistic point of view — local tastes better. Or does it?

Being the Goddess of Plenty, my Perfect Partner stole a few more potatoes than I needed to make whatever the dish I was making is called. Feeling sorry for those left out, I rapidly turned them into a potato sushi starter. Sliced thinly and sprinkled liberally with fresh-ground sea salt — oh lord, this is getting insufferable — I ate ’em raw. If you’re not a fan of raw, salted potatoes, you are missing out on one of life’s treats. And if you’ve never tasted raw potatoes still warm from the earth they were grown in, it would probably come as a surprise to learn they’re sweeter than many fruits you commonly think of as sweet.

However, if you let them sit overnight and try the same trick the next day, their sweetness will have been diminished by an order of magnitude as sugar does its magic transformation to starch. Therein lies the disappointment people often experience after plunging excitedly into local food. Whether it comes from Pemby or Podunk, time steals flavour quicker than the junkies next door will steal your stereo.

Of course, that’s not to say, or even imply, that local isn’t more flavourful. Much of the research conducted by food scientists during the past few decades has centred around ease of production, large-scale production. Very little has been directed at flavour, with the notable exception of attempts to ensure flavour is uniform across a variety. Even delicate fruits and veggies have been bred with a goal of uniform size, machine-pickability — fake word alert — ease of transport and infinite shelf life.

Take, for example, the noble strawberry. Until I started growing them, I’d forgotten that strawberries are soft fruit, as opposed to apples which are hard fruit. When I pick a strawberry from the back yard, it has a theoretical shelf life of about 1 hour unrefrigerated. Theoretical because its typical lifespan is about 15 seconds, 30 if I wash it before I eat it. If I pick it late in the day and refrigerate it, it’ll last until granola time the next morning. After that, it begins to look like a victim of progeria, old and shrivelled before its time.

If that same strawberry was grown in California, it would be sorted and packed, refrigerated and trucked 3,000 kilometres to Vancouver, trucked again the next day to Whistler, unloaded and placed on a produce shelf, purchased the next day, taken home and eaten either immediately or over the next few days. Whenever it was ultimately consumed, it’d be plump, red, firm-skinned and delicious looking. It would also likely have the consistency of a stuffed animal and be just about as tasty. Food scientists have laboured long and hard to make it that way because that’s the only way it can get from California to your table… in January.

Ironically, in July, those California berries can be purchased for around the same price, probably less, than soft, ripe, juicy and unbelievably delicious strawberries minutes from McEwen’s fields. It has been my choice, for many years now, to never buy and infrequently eat California cardboard berries. It has been my choice and great pleasure to stuff myself with berries from McEwen’s and my back yard until they run out my nose and until they’re growing season is over. Then I wait patiently until next year to enjoy them again.

California berries are popular because they’re cheap and available much of the year. They’re cheap because the growing season is longer in California, because food science has traded efficiency and shelf life for taste and, most ominously, because they’ve ridden thousands of kilometres on the back of cheap oil. Guess which reason is vanishing like a fart in the breeze?

And that’s why you’d better start getting up close and personal with local food. The days of strawberries in January are numbered, unless you preserve some of what you buy in July.

The best way to get friendly with local food in Whistler is to make pilgrimage to the farmer’s market each Sunday. The most fun way is to join the pedalling masses next weekend, Aug. 17 th , for the Slow Food Cycle Sunday up in Pemberton. Assuming the B.C. government and the Foodsafe police don’t actually outlaw farmgate sales — it seems as though they’re trying — most of us will never get closer to what we eat than meandering farm-to-farm through Pemberton’s lush valley and stuffing our panniers with the freshest, localest, most field-ripened food available.

And the best way to get primed and provoked about all things food and local is to come out to MY Place next Thursday to join in the Anything Grows forum on the future of food in Whistler and Pemberton. There’ll be a great panel, a questionable moderator and a unique opportunity to share your thoughts on being what you eat.

No throwing tomatoes though… unless they’re local.