The honour is mine... 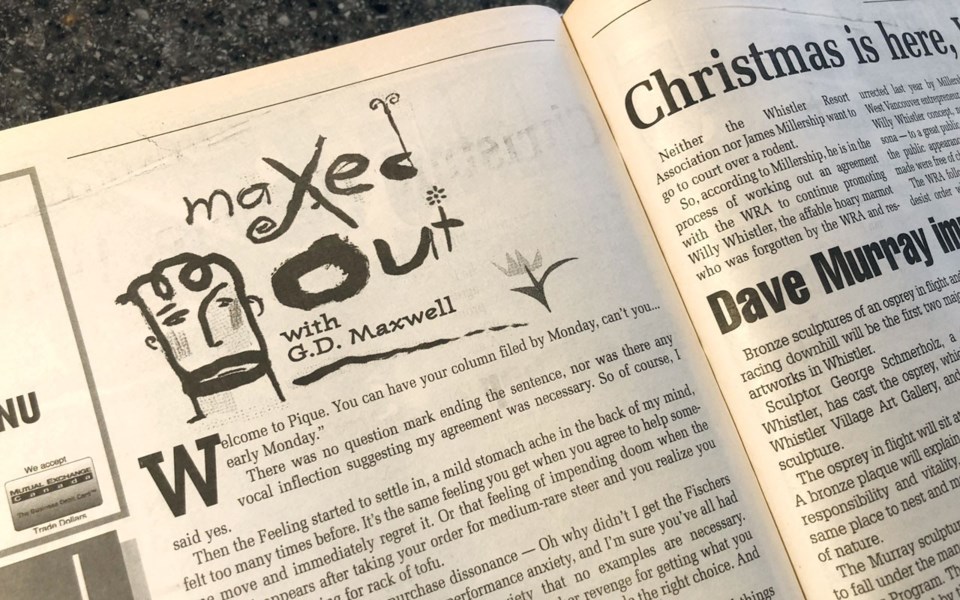 The day Bob Barnett asked me if I wanted to write a column for his year-old Pique was one of the worst days of my life. Wait a minute ... that didn't come out right.

Take II: I was having one of the worst days of my life when Bob Barnett asked me if I wanted to write a column for Pique. Yeah, that's better.

I'd just been informed Blackcomb Mountain—then a separate entity—wasn't going to hire me back for the winter. I think I was too outspoken for them. Regardless, I was black-listed at Blackcomb. Still one of my crowning achievements.

I was flattered but convinced I was talking to a crazy man. Sure, I'd written a couple of features for Pique and a handful of letters to the editor. But a column? I gave it three, four weeks at the outside. Bob had more confidence and was sure I'd be good for a couple of months.

That was 24 years ago. What did we know?

He asked for three sample columns. One of them began with the old British military joke, "Captain, captain, the natives are revolting!" "Don't be silly, Corporal; they're just different from you or me."

The column was about—and supportive of—the Upper Nicola Band's Douglas Lake Ranch blockade earlier that year. I thought Bob ought to know what he was letting himself in for. I did use it years later as the opening for a column about the Makah whale hunt. Not like I didn't warn him.

It wasn't until my ninth column Bob was threatened with a lawsuit. The developer of an early employee-housing project had touted the return on investment buyers could expect. Trouble was, his arithmetic was wrong. Way, way wrong. I pointed that out as nicely as possible. Apparently not nicely enough. He and a sitting councillor burned up the phone lines as soon as Pique was out. I assured Bob my arithmetic was right. It blew over without lawyers.

Not so a few years later. My 156th column—crazy, eh?—was 1998's Maxie Awards, a roundup of the year's achievements, dubious and otherwise. One, to the manager of the local cable company, rubbed him the wrong way and he launched the first and so far only lawsuit against Pique. It was groundless, of course, but at a time when the paper was just starting to make enough money for people to live on, the last thing they needed was pointless lawyer's bills. But time heals all wounds and eventually, the event was looked on with the kind of nostalgia you remember about your first root canal.

Defamation being more than occasionally on my mind, I frequently turned to my good friend and Whistler's only private eye, J.J. Geddyup, to speak thoughts I was worried about getting sued for. J.J. was always good for a tasteless quote or idea, like the time he was headed back to the U.S. to enter his proposal for the World Trade Centre monument: lifesize statues of Fantasy Island's Ricardo Montalbán and Hervé Villechaize pointing skyward under the caption, "Look Boss, da plane, da plane." Needless to say, his idea did not prevail.

I finally got on the good side of the Housing Authority and sitting council in 1998 when I wrote in favour of the 19 Mile Creek project after a particularly cantankerous public hearing in which upstanding citizens one by one took to the microphone and berated the drug dealers and child pornographers they were sure would move in and destroy their neighbouring property values. Calling them boorish, intolerant and elite, I suggested they reminded me of white-hooded Ku Klux Klansmen, their feared "transients" taking the place of southern blacks. Indeed, the natives were revolting.

It was, possibly, the last time I was in the good graces of mayor and council, who were appreciative of the public support. Always believing in "constructive" criticism, there were not-so-rare occasions when whomever was sitting in the big chair failed to discern the constructive part. But I felt confident Bob and partner and wife Kathy had my back. I was less sure they wanted it after one protracted session when the mayor and CAO of the day complained about what I'd written. Bob, apparently ever the patient man of few words he is, let them vent. When they were done and expectantly awaiting his assurance it wouldn't happen again, he is reported to have said, "If you didn't do things that piss him off, he wouldn't write about them." I like to think he saved taxpayers a lot of money because they might otherwise have hired a high-priced consultant to figure that out.

It's impossible—no, really, I've been wrestling with it for more than a month—to encapsulate 24 years of columns into a brief, anniversary-inspired overview. From the early days when few people gave Pique much of a chance of surviving, through the first few years when none of the founders earned enough to call it a living and I wrote for free, to that magic point where it became a profitable enterprise and, finally, when it smoked the Question and we all knew it was finally a going concern, Pique reported and helped shape peoples' perceptions and expectations of Tiny Town.

Just as it's hard to imagine Whistler without Blackcomb, it's hard now to imagine the town without Pique. Yet, as we see everywhere in the world, print journalism is, if not on life support, doddering toward the brink. In that regard, we can be thankful we live in this bubble; it's a bubble that seems capable of supporting a publication like Pique ... at least for now.

I have been, and am, profoundly honoured to have gotten the opportunity Bob presented to me in a moment of what I can only imagine was diminished capacity. It's given me a chance to weigh in on local, national and international politics, make absurd recommendations like declaring Whistler a Resort Principality and separate country, threaten to run for office, endorse those I considered good candidates for elected office and, hopefully, keep nudging them toward making Whistler an even more amazing place to live.

As with so much in life there is more in my rear-view mirror than I see through the windshield at this point. But I've got a few columns left in me and there are a few people who still read them. So happy 25th, Pique. I never thought it would last this long and am forever grateful it has.