Time to think of the greater good 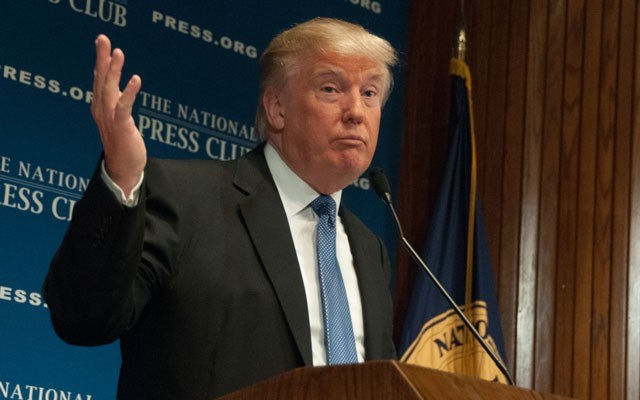 Once again, I have failed halfway through my latest 12-step program. Clearly, the largest part of the problem is, well, 12 steps. Let's get real. Five, six steps and a guy has a fighting chance. But 12? That's asking a lot.

It wasn't my fault though. It was Donald Trump's fault. How can anyone give up politics when The Donald has turned it into high camp and low art? Not satisfied with undercutting the Republican Party's half-hearted attempt to convince Latino voters the party faithful don't consider all of them rapists, murderers and drug pushers, Trump called them all rapists, murderers and drug pushers and then refused to back down from his indictment. OK, I exaggerate. He excluded the two or three he actually knows. OK, not "knows" but has allowed to work at Trump Towers... for minimum wages.

The 876 current Republicans running to be the party's presidential candidate were slow to distance themselves from his slanderous description. This apparent lack of conviction on their part was due to the fact they all hold Donald in such high regard. OK, it wasn't because of that at all. They wish he'd just slither away or donate to their campaign. It was because they all agree with him and, what the heck, what real chance do they have to woo any sentient Latinos anyway, having done all they can in whatever post they currently hold — governor, representative, mob boss — to either get them deported or ensure they continue to hold menial, minimum-wage jobs, like housekeeping at Trump Towers?

But then he went too far. In what can only be considered a gift to comedians, political commentators and Democratic presidential hopefuls — and really, what's the difference? — everywhere, Trump trumped himself by gratuitously calling Republican senator and ever-hopeful presidential candidate, John McCain, a coward. OK, he didn't really call him a coward. He said McCain wasn't a war hero. OK, he said he was a war hero, after he said he wasn't, but qualified it by saying he was only a war hero because he got shot down and captured and held and tortured for almost six years by the North Vietnamese. Trump prefers his war heroes uncaptured, you know, like Sylvester Stallone or Chuck Norris or that guy who was governor of California, the pumped-up one who looked like an ad for steroids.

That indictment galvanized the 1,015 other Republicans hoping to be the party's presidential candidate. They immediately jumped all over Trump — who, in the proudest Republican presidential contender tradition proudly served his country by racking up a near-record number of draft deferments — and were quick to say they all considered McCain a card-carrying war hero who suffered unspeakable horrors while held captive at the Hanoi Hilton. The scars McCain carries to this day include an inability to raise his arms higher than his shoulders, an outspoken philosophy of bombing the crap out of any and all countries he considers America's enemy, and the cross he will always carry for springing Sarah Palin on the American people and the larger world.

And now it appears The Donald is tiring of the slings and arrows of his fellow Republicans and contemplating an independent run for the presidency, or, as everyone else thinks of it, the biggest gift he could possibly give Hillary Clinton's campaign. As scary as it is to contemplate, an independent Trump run would split off a large core of staunchly Republican voters — the batshit crazy cohort — and virtually assure a Democratic victory... even if Bernie Sanders is the candidate!

How can I possibly give up on politics now?

Oh yeah, now I remember why I wanted to give up. It's because in the final analysis, all politics is local. And locally, we have our own spoiler to split the vote.

The most recent poll — please, I know all about the methodological pitfalls of modern political polling — for our riding shows a race so tight we may need the jaws of life to pry out a leader. The Liberal candidate sits a nose ahead at 23 per cent of respondents. Our Conservative MP was favoured by 22 per cent and the NDP candidate — reputed to be a guy named Larry Koopman who's finally going to visit Tiny Town — sits at 19 per cent. These numbers are well within statistical insignificance of each other.

What isn't insignificant though is our local Green Party candidate, who's polling nine per cent.

You can see what I mean by spoiler.

With absolutely zero chance of actually winning, what would become of that nine per cent if there was no Green Party candidate? Would they (a) cry out in anguish and not vote at all; (b) vote Conservative because, after all, Stephen Harper's vision of Canada most closely aligns with theirs; (c) vote Liberal or NDP; (d) vote for the non-Conservative candidate they believe most likely to win the riding?

OK, I hear you, dream on, Max. Like that would ever happen. Like the Green candidate would fold up his tent because he truly believed defeating the Conservative government was an honourable enough goal to set aside his own ambition and deeply-held beliefs.

Except... except, it's already happened!

Last week, Gary Adams, the Green candidate in the Kelowna-Lake Country riding, announced he was folding his tent and joining Liberal candidate Stephen Fuhr, who will represent both Greens and Liberals in an attempt to unite progressive voters and unseat the incumbent Conservative MP.

"Our common goals on climate change, restoring our democracy and diversifying our economy have been dramatically undermined in the last 10 years under Harper," read Adams' news release.

Now there are those — true believers and ideologues — who will tell you with a straight face the Greens won't be splitting the vote and handing victory to the Conservatives. Anyone who isn't a true believer or ideologue understands that statement clearly falls within the category scientists generally refer to as, alternately, fantasy or denial. Green voters are committed to a better country, one that in every significant aspect is diametrically opposite to the country Stephen Harper is forging in his personal fires of Hell. The chance of them voting Conservative is zilch. The chance of them then not voting in a fit of pique approaches zilch. Those votes are going to help — no, they're going to be crucial — to defeat Conservative candidates from sea to sea to sea.

So c'mon, Greenies. Do you really want to be Canada's Donald Trump?