“In a canoe a man changes, and the life he has lived seems strangely remote. Time is no longer of the moment, for he has become part of space and freedom.
Jun 4, 2020 12:00 AM By: G.D. Maxwell 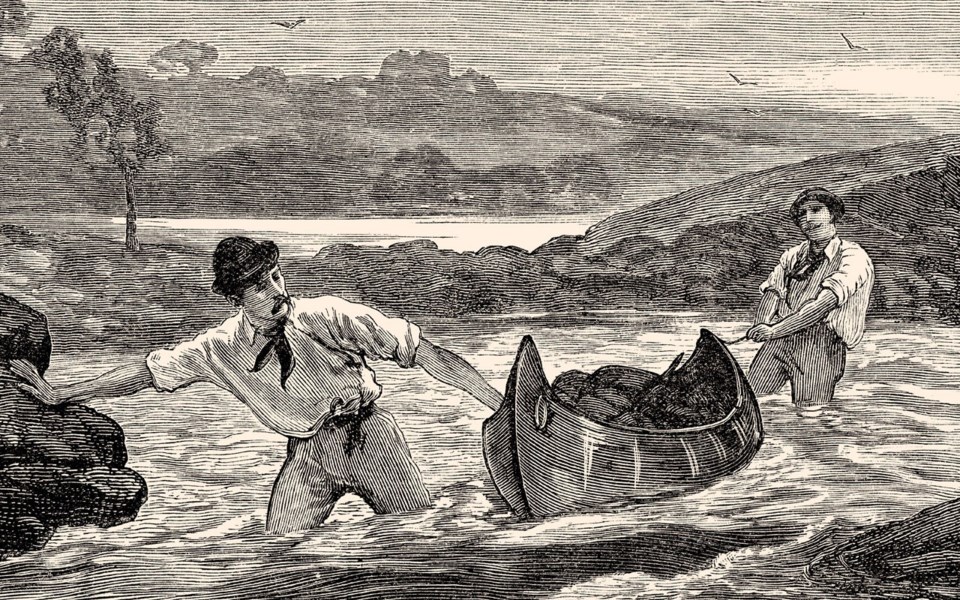 “In a canoe a man changes, and the life he has lived seems strangely remote. Time is no longer of the moment, for he has become part of space and freedom. What matters is that he is heading down the misty trail of explorers and voyageurs, with a fair wind and a chance for a good camp somewhere ahead.”

My very first canoe was handcrafted of birchbark and cedar, formed and decorated in the Algonquin style. Its squat, rounded ends, sharp at the root-laced stems and curving gracefully towards its passengers, opened gently amidships to form a spacious, perfectly apportioned lake traveller. That it was only eight inches (20 centimetres) long and travelled principally within the shores of my bathtub didn't really matter to me.

It was a gift from a land far away—Canada—a romantic place of forests and lakes and fish the size of grown man's arm where my grandparents went in the summer to camp and angle with their friends. Doubtless purchased at some roadside curio shop, it may have been of questionable heritage and craftsmanship but its sleek lines and delicate detail sparked my child's imagination and I longed to own such a craft and glide gracefully across still water.

Growing up landlocked in the deserts and mountains of the U.S. southwest didn't afford many opportunities to paddle ancient waterways. It wasn't until moving to Canada that canoes began to play any role in my life beyond a vague stirring in my collective conscience.

For Canada is a land of canoes, a terrain of lakes and rivers and streams held loosely together by portages of more solid stuff. The facade of modernity strung out along Canada's southern border—in the form of its cities and virtually all of its population—fades rapidly as you travel north into lake country or wind your way inexorably toward Hudson's Bay or the Arctic on one of many rivers draining into those incomprehensibly vast land and waterscapes.

In many parts of the country, a trip north isn't even needed to shake the patina of civilization. Lying snug against the border between Ontario and Minnesota is 4,700 square kilometres of protected wilderness consisting of hundreds of lakes, several historically important rivers and innumerable streams and creeks. Three- to four-billion-year-old granite, some of the oldest rock on this planet, is what passes for land there. Since being scoured by glacial ice, 9,000 years of freeze-and-thaw cycles, with the help of pioneering lichens, have pulverized enough of this Canadian Shield to support a forest of jack pine, black spruce, balsam fir and other northern forest trees.

To pick a route and dip your paddle into the waters of Quetico Provincial Park is to drink fully of the history of this country. Better than any academic text, to glide silently in the wake of Jacques de Noyon—thought to be the first European to trace these routes—or La Verendrye who followed, or the countless Ojibway braves, trappers, coureurs des bois whose travels led down the Kaministikwia and Maligne rivers and eventually to the shores of Lake Winnipeg, is to begin to comprehend or at least develop a sense of this place. If there is a Canadian Culture, the grail of angst-ridden Canadians fearful of being swallowed by the American juggernaut, the chances of connecting with it are far greater in the seat of a canoe in a place like this than it ever will be in any museum, art gallery or theatre.

And it was the canoe that made it possible. If it hadn't been for the thousands of years of canoecraft evolution employed by North American natives and an unusual willingness of early European explorers and settlers to abandon their own traditional methods of boat construction to embrace those impossibly flimsy bark canoes, the history of Canada would have had to wait for several generations until our European ancestors figured out how to walk on water. The history of exploration and discovery of Canada is, inextricably, the history of canoes.

On the south shore of the island of Montreal, in a blue-collar, workingclass neighbourhood, you can sit on a park bench perched in a narrow strip of grass between the St. Lawrence River flowing in front of you and cars whizzing past on the roadway behind you. Gazing across the water, you can see as nasty a stretch of white water as you're ever likely to find in an urban setting. Standing waves, haystacks and holes, some the size of large trucks or small buildings, boil for several hundred metres in the fast moving water.

The Lachine Rapids was the end of the line for boats built in the European style and it is not an exaggeration to say they represented the dividing line between New France and Canada. To move very far inland of the Lachine Rapids required early explorers and fur traders to adopt Indigenous modes of travel, learn long established water and land routes, and develop cordial relations with Native peoples already familiar with the uncharted territory. In so doing, they and their progeny were changed forever and grew a new country.

This early "development" of Canada stands in sharp contrast to what was happening south of the then-fuzzy border. When Marquette and Jolliet and La Salle and Champlain were exploring deep inland and Scots and voyageurs were trapping out the beaver further and further beyond Montreal, U.S. pioneers—travelling overland by horse and wagon—had barely made serious forays beyond the first hills west of their thin strip of civilization along the Atlantic Ocean. The canoe, travelling swiftly over familiar paths of water, made all the difference in the pace with which Hudson's Bay Company trappers reached the western end of the continent decades before the mountain men to the south ever tasted Pacific salmon.

The birchbark canoe encountered in this new land was, for its time and place, a perfect craft. Lightweight and rugged, bark canoes could take shape, at the hands of master builders, with an ease that must have astounded the new settlers. Using simple hand tools of stone, bone and wood, Cree and Montagnais, Abnaki and Malecite builders, and those of virtually every other tribe save some of the prairie Indigenous people, could carve and lash together everything from a one man canoe to a large tribal boat. Hand-carved white cedar planking and framing formed a solid but flexible hull. Birchbark, the inside facing out, provided a waterproof and durable skin. The canoe was held together and given additional strength by pegging the bark to gunwales, themselves mortised to cross bars and ribs and end stems, with all the disparate parts lashed up with supple split roots of black, red or white spruce.