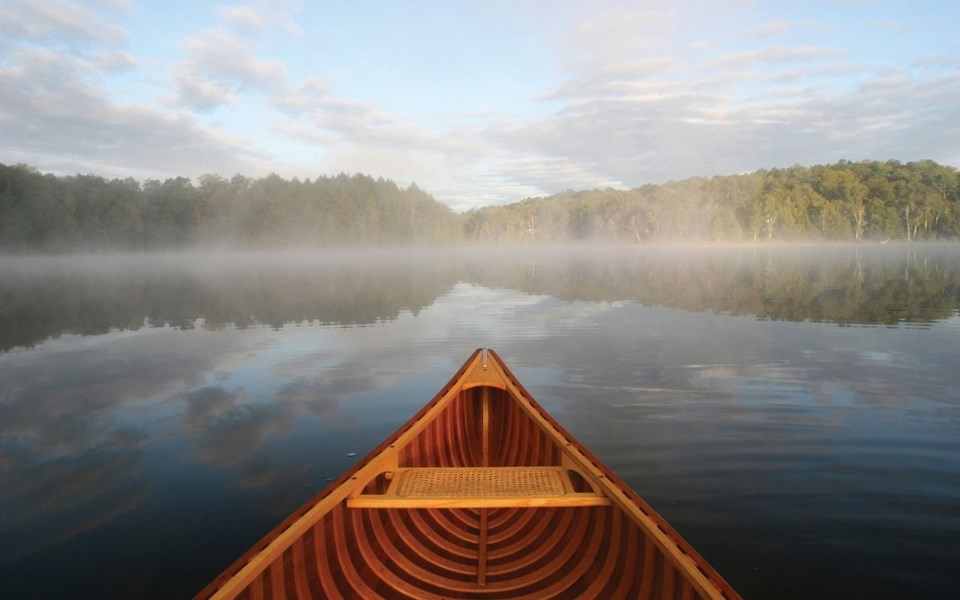 "In a canoe a man changes, and the life he has lived seems strangely remote. Time is no longer of the moment, for he has become part of space and freedom. What matters is that he is heading down the misty trail of explorers and voyageurs, with a fair wind and a chance for a good camp somewhere ahead."

Bark canoes, as described last week ("Maxed Out," Pique, June 4), were the staple form of transportation during the era of the fur trade and the opening of land west of Montreal. A well-built and maintained bark canoe might last 10 years under hard use and when age finally made it unsuitable for travel, compost gracefully back into the forest from whence it came.

Despite their ruggedness, bark canoes were not a favoured craft of the settlers of Upper Canada. With all their attributes, bark canoes were fragile. A recurring theme in the journals of early Canadian explorers was the constant need to re-pitch the seams of bark canoes and the frequent need to patch them with new bark after close encounters with any object more solid than water.

Needing a more robust working boat and lacking the substantial birches of the forests of New Brunswick, Nova Scotia and Quebec, pioneers in the Ottawa and Otonabee valleys favoured the dugout canoe. Burned and scraped out of a single basswood or cedar log, dugouts were simple to build or inexpensive to buy from local natives. By the middle of the 19th century, they had reached the apex of their development and were surprisingly elegant craft.

And then something interesting happened. In science, technology and medicine, among other fields, breakthroughs occur at the frontiers of knowledge. They happen when a flash of brilliance enables someone to bridge the developments in one field with those in another, creating a synergistic new direction of exploration.

In 1857, in the industrious village of Lakeland, Ont., watching the best of the dugouts racing against the best of the bark canoes at the Katchewanooka regatta, John Stephenson and Thomas Gordon wondered why they couldn't combine the finer elements of both craft. The result of that thought process set the stage for what would become the quintessential Canadian canoe, a craft that would spawn an industry, a pastime and some would say, a way of life.

The towns of Lakeland and Peterborough formed the centre of the Canadian canoe-building universe for the next half-century. The canoe that quickly developed in small manufacturing shops in the area morphed from Stephenson and Gordon's first attempt to bend and shape milled basswood boards over a skeleton of thin ribs into the fine-lined, lightweight cedarstrip canoe made famous by the Peterborough Canoe Company.

At its height, early in the 20th century, the cedarstrip canoe utilized narrow, thin shiplapped planks of western redcedar and yellowcedar running the length of the canoe, made rigid and held together by a web of fine, delicate, half-round oak ribs spaced every few centimetres from bow to stern. Art and whimsy played a hand in the selection of fine woods for decks, gunwales and seats and the whole effect was stunning. Rich woodgrain, sleek lines, fine workmanship yielded functionality and beauty fit for a queen. Which may be why a canoe of similar design was chosen by the government of the day as a gift from the people of Canada to Princess—now Queen—Elizabeth on the occasion of her wedding.

Cedarstrip canoes were light and nimble, like bark canoes, rugged and durable, like dugouts, and their build-over-frame manufacture allowed them to be produced in sizable quantities. But their milling, framing and fitting were labour intensive and required many skilled workers. So when Harry and Henry Chestnut of Fredericton appropriated designs for cedar-canvas canoes popular in Maine, and somehow managed to receive a government patent on the craft, canoe building in Canada began to undergo a shift away from cedar strip to the less expensive and simpler construction of wood and canvas. And when Ole Evinrude invented the infernal, peace-shattering outboard motor in the early years of this century, canoe building was sucked into a downward spiral as factories were retooled to build popular runabouts.

Advances after the Second World War rendered wooden canoes of any design almost obsolete. Fiberglass became the material of choice for canoe building. Easy to lay up and capable of moulding to compound curves and sharp entry lines, early Fiberglass canoes were light, inexpensive and efficient craft... until you hit a rock with one.

But compared to what was coming out of the Grumman factory, Fiberglass was a warm, fuzzy material. Light, cheap, shiny and almost indestructible, aluminum canoes quickly became standard issue for boat rental concessions, canoe clubs, Scout troops and hundreds of summer camps throughout North America. Despite having no soul, despite sounding like a metal culvert in a hail storm whenever you hit the gunwales with the shaft of a paddle, despite sticking to rocks like chewing gum to hot asphalt, aluminum canoes ruled the waters until advances in Fiberglass and plastics made those materials more durable, and, irony of ironies, led to the resurgence of cedarstrip construction and a longing for the warmth of cedar-canvas canoes.

New polymers of polyester and particularly epoxy resins, coupled with a complete rethinking of construction techniques, have fostered a renaissance of interest in wooden, particularly cedarstrip, canoes and kayaks. In 1983, Ted Moores and Merilyn Mohr published Canoecraft. The ideas and plans within its pages sparked a new interest or rekindled what had been a latent desire in many canoeists: a passion for the warmth and beauty of a handcrafted wooden canoe.

As well, nostalgia for and an understanding of the near perfection of design of, say, a Chestnut Prospector, have made it the most copied canoe design for builders regardless of materials used in construction. And ironically, the application of polymer coatings atop raw canvas before final painting have, with proper care, extended the time between having to re-canvas cedar-canvas canoes almost indefinitely, spawning a renewed love for the craft.

Next week, I'll describe two places to explore by canoe: a flatwater lake trip and a historic river trip, one a long day's drive from Whistler, the other, well, a bit further afield but definitely worth the trip.