Under the wide brim of western reconciliation...

After the morning rain , in the brief interlude of afternoon sunshine, I sat on the Longhorn patio, nursing a local IPA, watching machines dismantle the last of Whistler's bike park, wondering when the earth tones would be replaced by 50 shades of wh
Nov 20, 2019 11:15 PM By: G.D. Maxwell 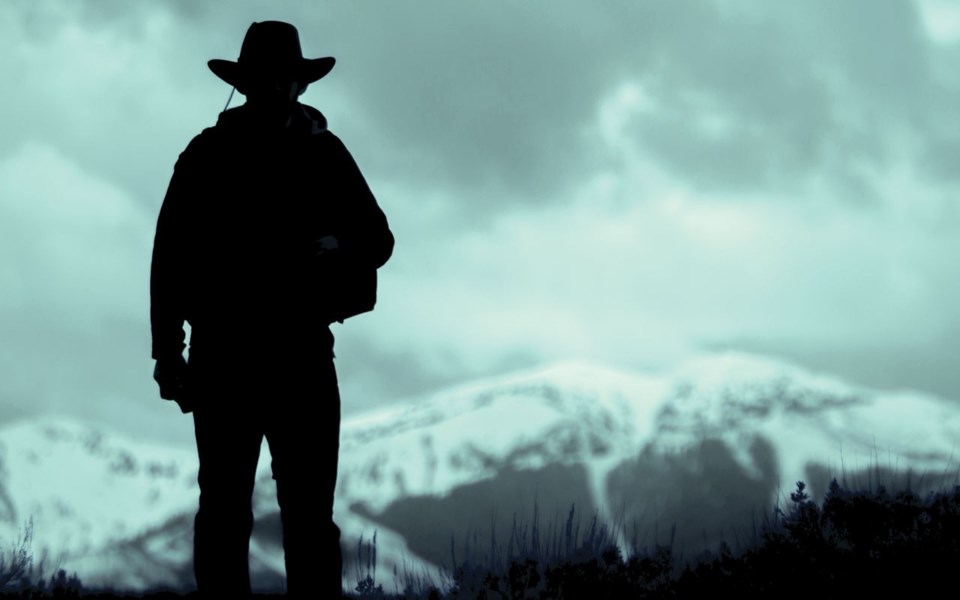 After the morning rain, in the brief interlude of afternoon sunshine, I sat on the Longhorn patio, nursing a local IPA, watching machines dismantle the last of Whistler's bike park, wondering when the earth tones would be replaced by 50 shades of white, listening to a table full of Instant Locals agonize over the lack of snow and realizing I've finally been here long enough that I don't agonize anymore—I'll just take it whenever it finally comes.

The sun had warmth but was playing hide and seek with increasingly threatening-looking clouds. Get moving again or have another? Decisions, decisions.

I was just about to go find my errant waiter and pay up when an unmistakable voice sent chills down my back.

And it had been a long time. A couple of years since I last bumped into J.J. Geddyup, Whistler's original—and possibly still—only private eye. I'd assumed he'd moved on, maybe back to the U.S., maybe back to the CIA, his former employer and last real job he'd ever had. Wrong again.

"I thought you'd left town, it'd been so long."

"I was here and there for a while," he replied. "But home is where the heart is, eh?"

"Yeah, I thought after last week I should come see you."

"Man, you have one shitty memory, dude. Didn't you read what Bob had to say about wishing I was around more to give your column some pizzazz?"

"Selective amnesia, I suspect. He was rambling down memory lane. And I suspect you are too. Why are you really back? I thought you were down in the States, sleuthing around again."

"Are you kidding? I'm persona non grata in the good 'ol USA. On the NSA's blacklist ever since I went down there with my plan for the World Trade Center memorial ... and thanks for bringing that up again next week, man. Just when I was hoping they'd forget about it."

"Hey, I thought it was a good idea... considering the source. So what does bring you back? Really?"

"I would use your help, if you must know."

"That sounds, uh, unlikely. But I will buy you a beer."

"I'll take it. But I still need your help. Nothing physical, just a little journalistic influence."

"I'm not a journalist, J.J. Just a writer of opinionated piffle. What do you need exposure for? You've never been too keen on upping your profile."

"I've got a plan to unite the country, man."

"Sure fire, man. I call it the Reconciliation but No-Truth plan."

Long, pained exhale. "With whom are we reconciling and lying to? No, wait a minute, I really don't want to ... "

"Dude, they're hurtin'. They're on the warpath. They need some love, some Canada love ... "

"They need a reality check, if you ask me."

"That too. But they need to see the rest of Canada standing in solidarity with them."

"And you have a plan. I can't wait to hear it. Reconciliation? This should be good. What's the plan, and I use the word advisedly?"

"I knew I shouldn't have asked. Cowboy hats?"

"Yeah, man, cowboy hats. What says we're with you more than every Canadian wearing a cowboy hat? Standin' tall and proud? Sportin' a cowboy hat every Friday?"

"Yeah, like casual Fridays, only Alberta We Love Ya, Fridays. 'Course they could wear them other days too. After all, they're pretty comfortable and they're really good for keeping rain and snow and sun off. I think it could catch on."

"Let's just say, hypothetically, you got the rest of the country to go along with this idea, J.J. How exactly do you think that would make Albertans feel better about whatever it is that's pissing them off so much? How could the rest of the country wearing cowboy hats once a week get them to stop whining about pipelines and Wexit and footing the bill for Quebec's screw-you and screw-your-pipelines politicians?"

"It would show 'em we're behind them. We feel their pain. We're all brothers and sisters under the big hat."

"I can't begin to imagine how seeing a bunch of rubes from Ontario wearing cowboy hats is going to help. And I'm pretty sure they'd be apoplectic seeing Trudeau sporting one... unless he was in blackface too."

"I'm not sensing a lot of support for this idea, Max."

"Well, maybe the No-Truth part will win me over. What's that all about?"

"It's about not trying to tell Albertans the truth."

"All of it. Any of it. They can't seem to get their minds around the truth."

"Like how powerless they'd really be as a foreign country with no way to get their product out of their country. Like how their own politicians have squandered the wealth they should be enjoying. Like how they've been giving their oil away for practically free to foreign companies who don't give a damn about their long-term interests. Like how they're still the richest province in Canada. Like how the rest of the entire freakin' world lives with sales taxes. Like how too much supply and too little demand makes their product worth less than everyone else's."

"That's a lot of truth to not be able to handle. What's the good of pointing that out?"

"You're no Jack Nicholson, J.J. But—and I can't believe I'm about to say this—you do have a point. This is a way less crackpot idea than, say, your Holy Panini sandwich shop and yoga studio concept."

"I still think that one would have been a hit."

"What the heck, I'll write about it this week. I even have a cowboy hat somewhere I can drag out on Friday. And maybe Bob'll be happy to hear you're still around."

"I ain't goin' anywhere, dude. How about another beer?"