Weather gets a hole-in-one 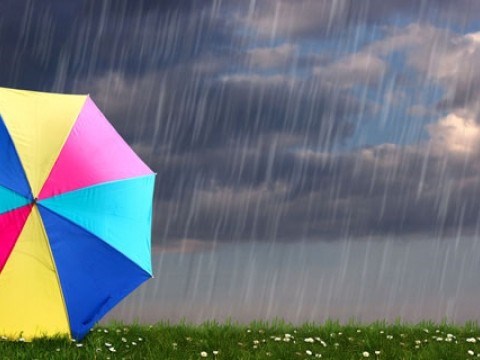 I blame it on the weather. Why not? Everybody else is. ICBC is blaming higher insurance rates on the weather. They say the unceasing winter, tepid spring, record rains of May and Junuary have driven - pun intended - a spike in claims due to accidents in which road conditions played a starring role. Personally, I think road conditions had a lot less to do with it than people driven to desperation and distraction by the teasingly absent summer, madly searching Expedia for cheap escapes while they should have been watching the wet road in front of them.

Tourism is way down and the various groups whose business it is to keep tourism up are going out of their way to blame everything except the weather. I have no doubt the global recession - everyone in America who still has a job being blessed with underwater mortgages - fear of rogue polar bears and a Canadian dollar that found its strength at the worst possible time all contribute to the dearth of tourists.

But two things are readily apparent. First, regional tourism is down because, well, why come to British Columbia to enjoy really crappy weather when you can stay home in Washington and enjoy crappy weather and a sinking dollar while you wait for the sheriff to nail the foreclosure notice to your front door? And second, the people spending our tourism promotion dollars never learned the old adage about making lemonade out of lemons.

Most of the rest of North America is sweltering through a heatwave. People are dying in the Midwest from the heat; they're being murdered for the ice in their freezers by people whose brains have been turned into fried eggs. And what are the B.C. tourism people trying to sell them? Sunshine! Bright pictures of happy people frolicking in sunshine. The last thing these people want to see is sunshine. Show them pictures of our clouds. Show them the incessant rain, people huddled under umbrellas, wearing fleece in July and bitching about how cold it is. Let them know there hasn't been a day this year anyone in their right mind has turned on their air conditioners... whatever they are. Hell, we'll have to hire more border guards to keep the onslaught orderly.

The particular thing I'm blaming on the weather happened last weekend. Having grown irritable - read homicidal - I decided a change would be as good as a rest. Like most homespun wisdom, that proverb is meaningless drivel. For starters, it was originally meant to suggest a change of work was as good as a holiday. I can just see some fat, jolly factory owner telling his underpaid minions that as they finally rise up in rebellion and toss his fat ass into a steel press. As an aside, an anagram of "A change is as good as a rest," reads, "Ache to resign so sad a saga." I wasn't bored enough to actually figure that out but I was bored enough to notice it when I Googled the stupid proverb to begin with. Whatever; at least it seems to more accurately capture the pointlessness of it all.

To change, in search of a respite, I agreed to accompany the Wonderful Woman in my life to the Sunshine Coast. I'd never been there and, truth be told, just assumed it was a name conjured up by some PR hack for yet another dismally rainy scallop of B.C.

"Oh no," various people have told me. "It's a lot less rainy than Whistler."

Rolling into Egmont after a ferry ride best described as frigid, albeit dry, the first thing I noticed was how lush the rainforest looked. The second thing I noticed was a prominent sign reading, "Boil water advisory!" There are generally only a few reasons areas other than native-Canadian-first-nations reserves have boil water advisories: inept water management, e.g., Walkerton, Ontario; contamination, for example a herd of sheep falling into the town well, for which I have no example; and rain so hard there's very little difference between dry land and septic drainage fields.

I suspected the latter.

With the moon full - a presumption on my part since the sky was a uniform and dense grey - the tidal flows at Skookumchuck Narrows were supposed to be epic, dude. Skookumchuck Narrows is an impressive bit of water connecting Jervis Inlet and Sechelt. Twice a day the tidal flow is impressive. When the tide comes in, standing waves in excess of two metres are not unusual and local kayakers go apeshit surfing them and getting tossed like so many pairs of socks in a berserk washing machine. When the tide goes out, whirlpools like liquid tornadoes dot the waterscape.

It's all about water at the Narrows because other than that, the scenic view, assuming the cloud ceiling lifts enough to offer one, is largely mangy hillsides recovering from clearcuts of various ages.

To get to the Narrows, you park - for free - across from the Egmont Museum and Cultural Centre. I'm not making that up. It's a four kilometre walk, or, in our case, swim. There is something particularly perverse about walking four kilometres through the rain to stand in the rain and watch 200 billion gallons of water flow from one place to another. Impressive as it was, the only thing I could think of was, "I've got to pee." I'm pretty sure it's a uniquely B.C. kind of holiday and one the tourism people really ought to be pitching to Midwesterners right now.

After enough of the Sunshine Coast to nearly drown, we decided to head over to Vancouver Island to see friends. The Comox Valley is Vancouver Island's retirement capital. Oldsters from all over Canada flock there to enjoy better weather than they ever had in their lives, unless they lived in White Rock or Osoyoos.

It was raining so hard in Comox it made Egmont look like the desert.

On the upside, for reasons I can only guess at, gas was 99.9¢ a litre. That was not a typo. If it didn't cost $150 in roundtrip ferry fares to get there, that alone would bring tourists in record numbers.

By Saturday, the downpour was a drizzle. By Sunday a memory. And so - and this is what I blame on the weather - on Sunday, I played golf. My relationship with golf is about as warm and loving as that between Stevie Harper and Maude Barlow. I've spent most of my adult life avoiding playing golf for much the same reason I've tried to avoid being audited by Revenue Canada. No matter how benign the outcome, you've lost before you ever get started.

And notwithstanding there were actually mushrooms growing on some of the greens - which, I must admit, were outstandingly green, if hopelessly sodden - something very, very, very scary happened.

Oh sweet Jesus, what have I gotten myself into?