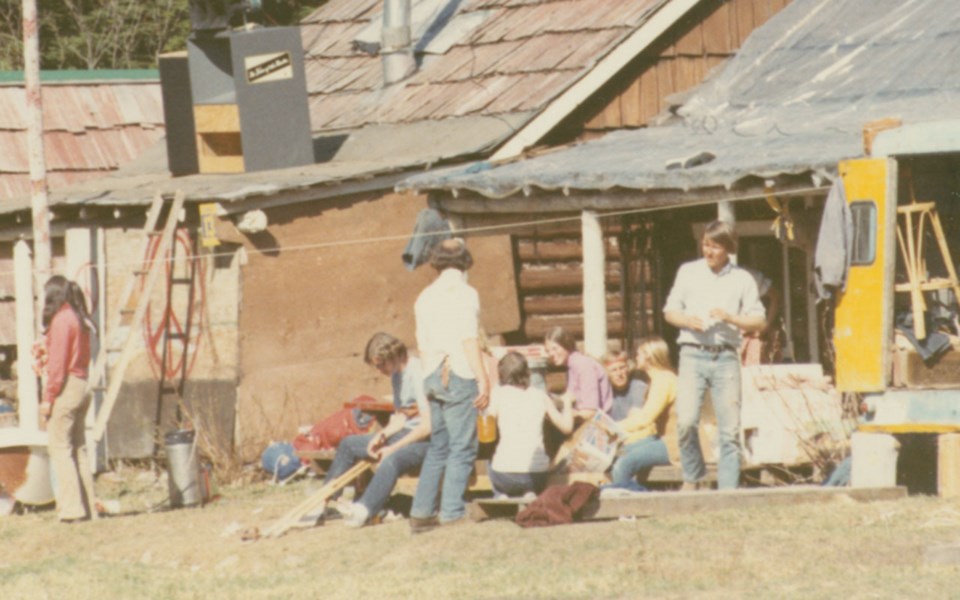 Photo by George Benjamin Collection / Courtesy of the Whistler Museum

One of our Rumsfeldian known unknowns is what the coming ski season will be like. And one of the largest of those is the size and makeup of the town’s workforce. But chances are pretty good a tight housing market will endure. Thus it has always been.

So to avoid railing against, in no particular order, anti-maskers, anything Trumpian, the proliferation of arsehole boaters and motorcycle “accidents,” let’s take a trip in the time machine and revisit Whistler’s fabled squatters.

In retrospect, squatting seems so glamourous. But in reality, it was day-to-day living. Every drop of water you drank, cooked with or washed in had to be hauled inside from a nearby river or stream because, obviously, there was no water system. Washing was accomplished in a basin or bucket or, weather and nerve permitting, by a quick plunge in water from snowmelt.

Most of the cooking was done on wood-burning cookstoves, except in summer when heat made firing them up unbearable. Winter’s firewood had to be close at hand before the snow fell since there was no way to bring it in afterward. Everything from food to building materials to books to the kerosene for lamps had to be carried in by hand.

It took hours of work each day just to keep everything running. But the freedom, the peace, the beauty of living in the bush made it all worthwhile. The sounds of nature infused the space: running water, singing birds, rustling trees.

By one firsthand estimate, they made up as much as 10 per cent of the population of the newly launched Resort Municipality of Whistler. The squatters were young, idealistic, cheap, hard-working, lazy, entrepreneurial, shiftless, good-for-nothing, upstanding citizens. Not all at the same time, of course.

They bore a striking—and for many of the more conventional citizenry, uncomfortable—resemblance to pioneers from a century earlier. Shaggy hair, shaggy beards, unkempt clothes. They worked hard in the summers, skied hard as members of the UIC Ski Team during the winter, and partied hard all year long.

As Whistler faced an uncertain future and launched its grand scheme to convert the town dump into the town centre, the squatters were in the way. Some of them were in the way physically, others simply represented the “wrong” element in a buffed plan that had room for only right elements. They drew the fury of the Alta Lake District Rate Payers Association who were of the firmly held belief that squatters “were not contributing either directly or indirectly to the infrastructure here in Whistler and were a personal affront.”

In a letter published Jan. 18, 1978 in the Whistler Question, a gentleman who signed himself Ted Franks pretty well summed up the anti-squat forces when he wrote, “[They] chose to live like gypsies while others pay room and board. They are completely dedicated to their undisciplined lifestyle of enjoying everything the valley has to offer without contributing in any way.”

His point of view was shared, with perhaps less vituperation, by the paper’s publisher, who also objected to the increasing numbers of people living for free wherever they choose.

As a result of a perceived groundswell of opposition, the Lands Branch, overseers of Crown land, issued eviction notices to the occupants of 40 properties in November 1977. Final notices were issued in April 1978, requesting the squatters be off Crown property no later than May 31, 1978.

A contingent of squatters petitioned the municipal council of the day at a meeting on May 23, 1978. They requested council’s support in their appeal to Lands Branch for a one-year moratorium on the eviction actions. Over the May long weekend, they collected 300 signatures from residents to support their case.

Al Raine, appointed to council to represent the interests of the province, recused himself from the debate because of the possible conflict his unique role might represent. Councillor Frans Carpay wondered if perhaps he too shouldn’t recuse himself since he employed a number of the squatters in his home-building business.

In the end, he stayed and argued in favour of supporting the request. One by one, the other councillors supported, some with considerable reservations, intervening on behalf of the squatters. In the end, only Mayor Pat Carleton objected. He couldn’t understand why the squatters hadn’t moved out when they were told to do so the first time and didn’t see any point in giving them another year.

Lands Branch capitulated and agreed to postpone the final eviction for one year. In exchange for their forbearance, they required the squatters to post $500 bonds and agree to remove their structures and return the land to its natural state. And just to prove they meant business, on June 23, they torched four unoccupied squats along Fitzsimmons Creek.

The squatters’ “representative” at council was Charlie Doyle. Bearded, long-haired, a little scruffy around the edges, Charlie was about as representative as anyone could be. He’d wandered into Whistler in 1972 after graduating from university in Thunder Bay, Ont.

“I didn’t have any intention of ending up here, but I read an article in Banff about ski bumming in Whistler. It profiled Al Davis as ski bum elder statesman and sounded pretty good. As it turned out, when I arrived in Whistler, I singled up in the first line in the gondola barn and got on with the three guys this article was about. By the end of that first day, I had a place to live and a ski pass I got off this guy on a stretcher at the bottom for 10 bucks.”

Charlie figured this place was so good, he’s never left.

After renting a couple of different places, he had the chance to move into an old trapper’s cabin on the Cheakamus River. Having been occupied by a couple of generations of ski bums, it sat near what is now Cheakamus Crossing. Built without the guiding hand of an architect, the cabin was rustic in the serious sense of the word. A wood-fired cookstove provided heat, mostly, and a Coleman stove expedited morning coffee. Nearby, along the bank of the Cheakamus, Charlie built a sauna for deep relaxation and sweaty parties.

“It was a lovely place,” he says wistfully. “I lived there for four years until 1979 and then I took it apart and moved it to the place I’d rented, thinking I was going to do something with it. It finally ended up as firewood when I moved from that place to another place. I don’t know if I’d still be here if I’d have had to pay rent during those years.”

And there were others. Next week.