Why skiing beats a beach vacay any day 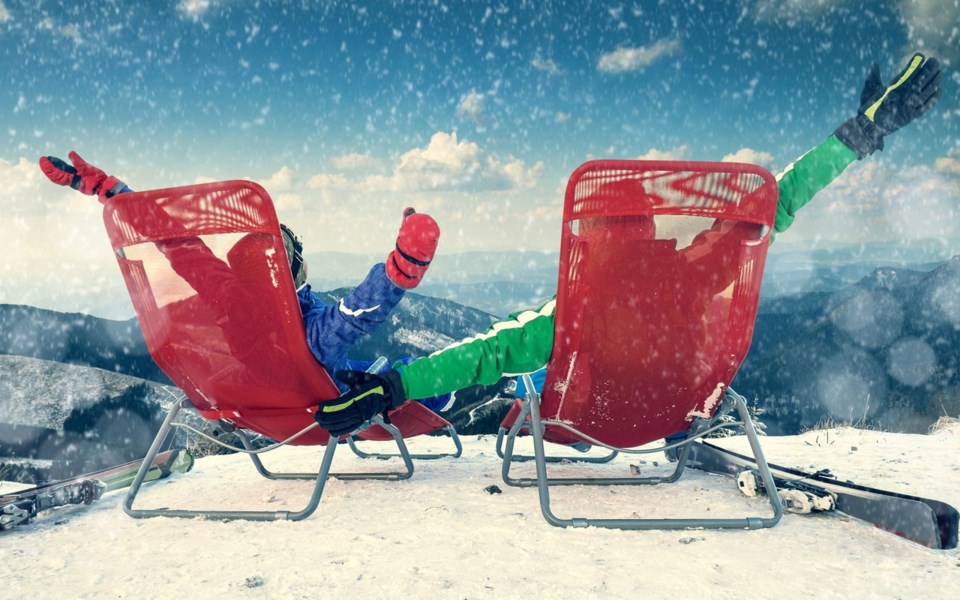 Around this time of year I fall out of step with many—most, maybe—Canadians. "Around this time of year?" I hear you snigger. I'll ignore that. You see, I like February. I mean, what's not to like? It's short. There's a surprise extra day every fourth year, stuck in like a toy in a box of Cracker Jack. By the time February rolls around, the days are getting noticeably longer. The sky's brighter when I wake up and there's still light left at the end of the day. If you've gotten smart enough to avoid maxing out your credit cards for Christmas, you can squeak through February without being reduced to eating KD. And, of course, there's my birthday capping off the end of the month.

Now January, there's a month to hate. January's like sober Dr. Jekyll to December's hell-raising Mr. Hyde. January's a pious Baptist minister droning on about the wages of sin to a congregation of hungover New Year's Eve celebrants, collectively fantasizing the wood-chipper scene from Fargo, only with the padre's still-kicking feet pointing straight towards heaven.

It is also during February—starts Saturday, you know—when I wonder why everyone doesn't ski. That being said, there are days when I wonder why anyone skis. I know why I ski but I'm not entirely sure how I managed to get to this point. I've never taken part in a more difficult, frustrating, expensive, uncomfortable, confusing, infuriating, rewarding, life-affirming, physically debilitating, potentially deadly sport, and quite frankly, I can't think of another one that even comes close to blending all those elements into one attractive package and whose participants cover the span of human existence from very young to very old.

I know what got me started. I was goaded; more accurately, my bravery—stupidity—was taunted by my wife and sister. Rather than suffer days of indignity listening to their chicken-like clucking sounds, I agreed to go skiing. I'll spare you the gory details except to say one should never wear slick nylon rainpants the first time one tries skiing, lest one slide all the way down the mountain with no hope whatsoever of self arresting.

I know what hooked me. Adrenaline. I was already hooked on mountains, having grown up within sight of them and spent an inordinate amount of time hiking, climbing and generally wandering in them.

I also know it was skiing and only skiing that kept me sane through a number of Toronto winters. Winter in Toronto is torture. Pristine snow turns to black slush within hours, unless it gets quickly coated with freezing rain, which it often does. In either case, the city begins to make Aleppo look pretty good.

When I took up skiing, I sold the expensive lamp I'd bought to fend off seasonal affective disorder. I looked forward to winter...even in Toronto. I stopped browsing vacation brochures touting beautiful, warm beaches. I took pity on those foolish enough to be sucked in.

Canadians on beach holidays in February are, to be blunt, pathetic. They're easy to spot, glowing a pasty, iridescent white, only slightly camouflaged by their first-day, crimson sunburn. They drink too much. They tend to be first in line at the all-inclusive buffet, unless there are Americans there. And they look as though they're trying way too hard to relax.

For many Canadians, a beach vacation goes something like this. Two weeks prior to departure they put in 60- to 70-hour weeks in a futile attempt to avoid returning to 60- to 70-hour weeks made worse by the constant itch of a peeling sunburn. First day out, they grab a book or other distraction, sunscreen, towel, chair and head to the beach/pool to "relax." Relaxation consists first of contorting themselves to slather on sunscreen that will prove to be marginally effective and after that trying to find a comfortable position to...lie in the sun.

Having overcome those hurdles, the real indignities begin. If they weren't painfully aware of it while forcing themselves into their swimwear, early thoughts will turn to wistful remonstration over not having spent a bit more time at the gym to tighten up the holiday rolls currently cascading over the tops of their bathing suits. Rationalizing that all the other Canadians look in approximately the same shape, they relax...for about 10 minutes. Then they begin to think about the work piling up in their absence. They can verily hear the dings of incoming emails. They try not to think about them and try harder not to think about the fact they'll check them when they get back to their room.

They grow restless, maybe walk along the beach only to be assaulted by locals hawking handicrafts made in China. They escape into their books, order a cold beer, and start the process all over again, counting the time to dinner and the inevitable gastro-intestinal distress that follows.

Meanwhile, their neighbours hit the slopes. Outerwear sufficient for skiing hangs in every Canadian's closet. It is warm and bulky, kind of like themselves. It hides what they'd rather not show. And while skiing is greatly enhanced by a modicum of physical fitness, it is a sport where gravity does most of the heavy lifting.

To be sure, learning to ski/board is a frustrating, often painful, process. But knowing how to slip your way down slopes once you're over that learning curve is preposterously easy. Sure, your quads will complain, you may even breathe hard but most of energy you'll burn will be spent keeping you warm on the chair ride back to the top.

The brilliance of skiing though is the feeling you are engaged in an all-encompassing, tightly focused, strenuous physical activity. This feeling is, of course, enhanced by being in a breathtaking mountain environment: clean air, stunning scenery, wide-open spaces, adrenalin and the fact you can't even begin to think about work while you're sliding down a mountain. The alchemical combination of all these things, both real and imagined, will lead you to believe you are not only a fine physical specimen but one deserving of a magnificent dinner and a copious dessert...notwithstanding the fact you wolfed down a platter of nachos and two jugs of beer at après.

After a week's vacation skiing, you'll head back home feeling on top of the world. Barring frostbite, you won't have to visit a dermatologist like your sunburnt neighbour, you'll have marvellous lies to tell co-workers with thrilling high points that'll make lying on the beach seem pathetic by comparison. Doesn't matter if they're not true. Doesn't matter if you never ventured off green runs. They won't know.

And the salve to the pain of what it costs to go skiing for a week will be this: Winter will be something you look forward to, not loathe. What more could a Canuck ask for?