A house by Fitzsimmons 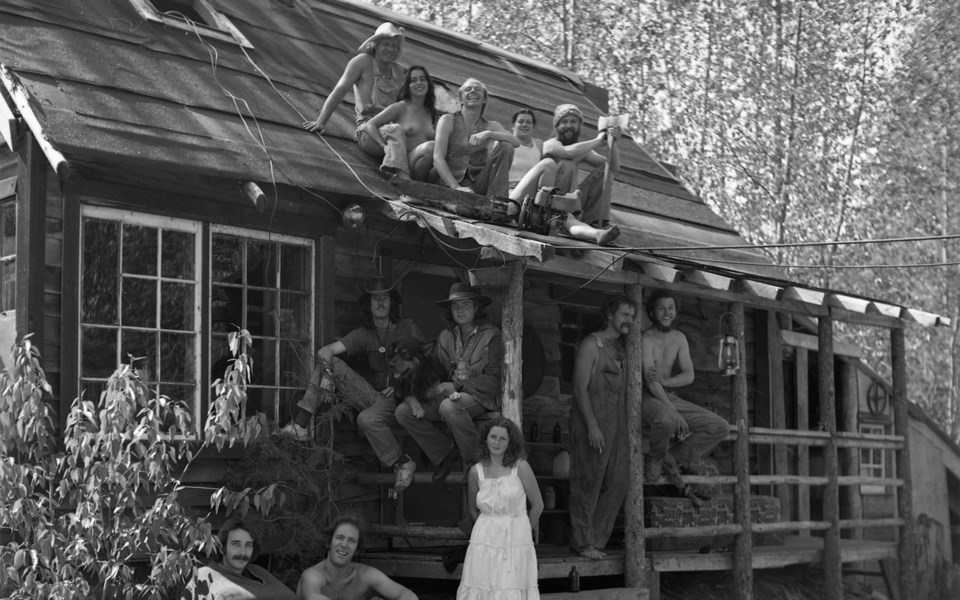 THE HOUSE THAT ANDY, RANDY AND DAVE BUILT The squat built from recycled materials near Fitzsimmons Creek was home to some of Whistler’s early ski settlers. Greg Griffith Collection.

To many, the photograph of a group posed around and on a rustic house is a familiar image of a different era in Whistler, when the nearest grocery store was often found in Squamish and only one mountain had any lifts operating. In 2011, Sarah Drewery, then the Collections Manager at the Whistler Museum, conducted an oral history with Andy and Bonnie Munster, and asked about the history of the house in the picture, which Andy called home for about five years in the 1970s.

Andy first came to Whistler in 1971 to ski. He had been expecting something bigger and drove straight through to Green Lake before realizing he had passed it. According to him, in his first four years in the area, he ran into problems finding a place to rent and so in 1975, he and two friends, Randy and Dave, decided to squat and build their own cabin. Randy, who came from California, chose the site near Fitzsimmons Creek and decided that they didn’t want anything plastic in the house, preferring wood and natural materials. With little money to spare amongst them, the cabin was built almost entirely out of recycled materials.

Construction began in the spring or summer of 1975, often relying on what they could find in the dump. They found lumber that had been thrown away after another construction project finished its foundations, old-fashioned windows that somebody no longer needed, and couches in pristine condition. Other items were donated by people they knew or sold to them cheaply, such as a cast-iron cook stove and wood heater that Seppo Makinen sold to them for $20. Andy estimated that by the time they finished the house, it cost a total of $50 and included an upstairs, a sunroom, a large woodshed, and an outhouse.

The house was comfortable but keeping it running was a lot of work. All of the heating came from wood and each fall, they would have to cut at least eight cords of firewood. Water had to be hauled from Fitzsimmons Creek in buckets—though in summer they could use a water wheel— and heated on the stove for showers and washing. Andy recalled there were a few times when they decided not to have the wood stove on and then woke up with frost in their mustaches and beards. Luckily, the house was quick to warm up and stayed warm for quite a while.

In late 1978, most of the squatters on Crown land in Whistler were served with eviction notices.  According to Andy, they were shocked and seeing the notice “your heart kind of sinks down,” but they were able to meet with the provincial and municipal governments and negotiate a year’s extension. When it came time to leave the house, they gave away furniture, took out the windows and any reusable materials, and talked to the fire department about what to do with the shell.

In a speaker event last fall, Jim Moodie mentioned that, as part of the team managing the village construction at the time, he was partly responsible for burning down Andy Munster’s home. The eviction notices were served around the time that the first ground was broken on the village site and, as Andy put it, “We were actually just moving out when the pile drivers and everything were starting in the village.” The shell of their house was used by the fire department for fire practice and, after trying a few different things, they let it burn to the ground.

The fire was documented in another series of photographs, depicting what many felt to be the end of an era. The next few years saw the construction of Whistler Village and the opening of Blackcomb Mountain not far from the site of that house, where Andy said if you were to walk past today “you’d never know it was there.”

Museum Musings: Getting ready for Blackcomb Mountain’s first season
Sep 28, 2020 10:00 AM
Comments
We welcome your feedback and encourage you to share your thoughts. We ask that you be respectful of others and their points of view, refrain from personal attacks and stay on topic. To learn about our commenting policies and how we moderate, please read our Community Guidelines.