A variety of Whistler cooks 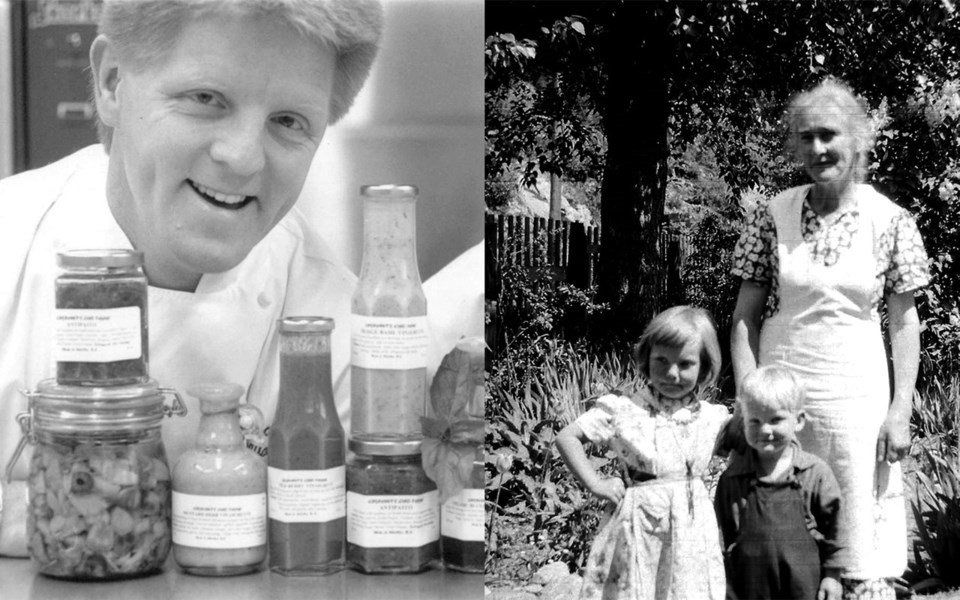 Left Chef Bernard Casavant in the kitchen of the Fairmont; right Lizzie Neiland and her grandchildren Louise and Sam Betts in her garden at 34 ½ Mile. Whistler Question Collection, 1994; Smith Collection.

Over the past few weeks, while taking some time to prepare the museum to reopen for the summer, we’ve been continuing our perusal of Whistler Recipes, the cookbook put out by the Whistler Museum & Archives Society as a fundraiser in July 1997. The book brought together recipes from past and (then)-present Whistler and Alta Lake residents, and by looking into the stories behind the name attached to each recipe, it doesn’t take long to realize just how quickly the area changed.

Lizzie Neiland and her children (Jenny, Jack and Bob Jardine) came to Alta Lake with Tom Neiland in 1921 and lived in a house on Alpha Lake, where Tom started his own logging business. In 1923, the family moved into an old cabin at 34 ½ Mile (an area today better known as Function Junction) where they would live for the next two decades. From photos of the “Neiland Jardine Ranch,” we can tell that the Neiland family had an impressive garden and even kept chickens and, at times, other livestock. This was not uncommon for the time, when many households grew their own produce, made their own preserves, and even raised their own livestock.

Whistler Recipes was dedicated to the early residents of Alta Lake, “who cooked and baked under challenging conditions.”

This would have included Lizzie Neiland, who kept her family fed at a time when power and running water were not easy to come by in the valley, groceries were ordered from Vancouver and delivered by train, and challenging economic conditions sometimes led to the shooting of a “government cow” (deer poached out of season).

There is one recipe in Whistler Recipes attributed to Lizzie Neiland, for “Barney Google Cake.”  Though we can’t find much information on the cake, Barney Google was a character in a daily strip first published in 1919, first called Take Barney Google, F’rinstance, and today known as Barney Google and Snuffy Smith.

Also included in the book was a recipe for “Warm Chicken Spinach Salad” from Chef Bernard Casavant, who spent his time in Whistler cooking in a kitchen very different from the one Lizzie Neiland would have had.

Chef Bernard grew up on Vancouver Island and knew before he left school that he was going to be a chef. He became one of the first chefs from B.C. to earn the highest qualification of Certified Chef de Cuisine and was the first West Coast born and trained chef to represent Canada in the Bocuse d’Or Competition in France. He moved to Whistler in 1989 to become the executive chef at the newly opened Chateau Whistler Resort.

Chef Bernard is considered to have played an important role in turning Whistler into a culinary destination. After eight years at the Chateau, he left to open his own restaurant—Chef Bernard’s Cafe—in the Upper Village, and was voted Best Chef in Pique Newsmagazine’s “Best of Whistler” for multiple years. Part of what made Chef Bernard (or “Cheffie” as one article referred to him) so popular was his support for the local farming community and belief in using fresh and local ingredients (in 1993, he was one of the founders of the Whistler Farmers’ Market), and his involvement in the community (he was the founding chef of Whistler Search and Rescue’s Wine’d Up fundraiser). He and his wife Bonnie moved to the Okanagan in 2006.

By the time Chef Bernard moved to the area, it would have been very different from the Alta Lake that Lizzie Neiland first came to, but we love that the recipes of early Alta Lake residents are included alongside those of renowned chefs, all of whom cooked in the same place.