Recently, we here at the Whistler Museum were tasked with finding more information about a flood that washed out and damaged several bridges over Fitzsimmons Creek in the 1990s.
Sep 10, 2019 1:00 AM By: Allyn Pringle 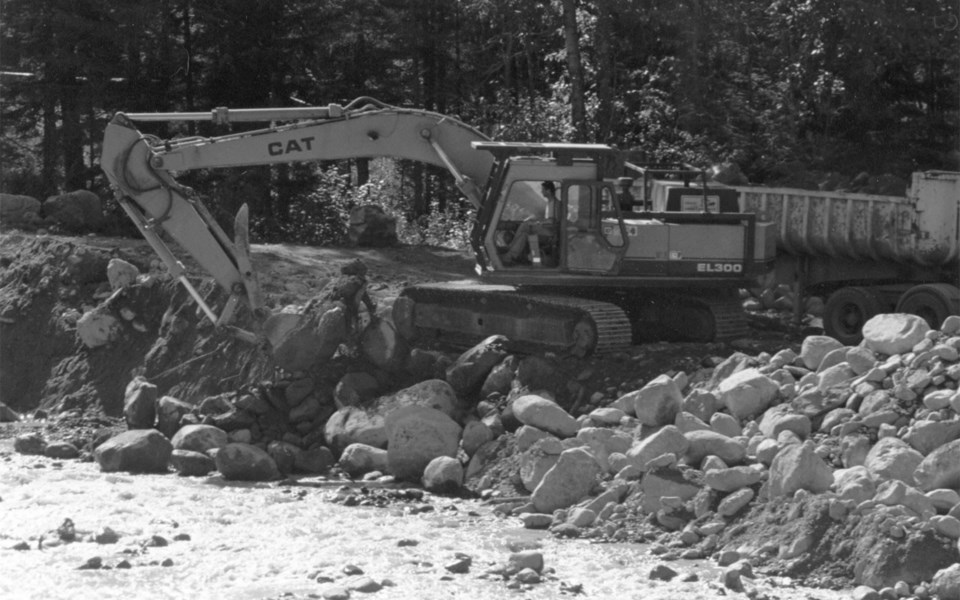 opening the floodgates Between Aug. 26 and 31, 1991, 155 millimetres of rain fell on Whistler. For comparison, Whistler's historical rainfall average for the entire month of August is less than 50 mm. the Whistler question archives

Recently, we here at the Whistler Museum were tasked with finding more information about a flood that washed out and damaged several bridges over Fitzsimmons Creek in the 1990s. As it turned out, the flooding had happened 28 years ago last week, with the bulk of information found in the Sept. 5, 1991 edition of The Whistler Question.

The first mention of an unusually wet end to August appeared in the previous week's editorial section, where then-editor Bob Barnett opened a piece on government money granted in the area with the thought, "The old adage it never rains, it pours, has applied to the weather this week, but also to government handouts." Between Aug. 26 and 31, 1991, 155 millimetres of rain were reported to have fallen in Whistler, with the bulk of it coming between Aug. 29 and 30. Historically, the average rainfall for the entire month of August was under 50 mm; this unusually large quantity of water caused destruction throughout the Sea to Sky corridor.

During the five days of intense rain, water levels at the Pemberton Airport and the Golf and Country Club (now The Meadows at Pemberton) were recorded at over two metres and BC Rail recorded at least 12 places between Britannia Beach and Lillooet where the crushed rock that supported the rails was washed away, leaving sections suspended over the ground.

In Britannia Beach, severe flooding caused Britannia Creek to change course through the lower townsite. The highway around Squamish was blocked for 36 hours. According to the Ministry of Forests, three quarters of the forest service roads in the Squamish Forest District were closed from washouts, flooding or slides, with multiple bridges destroyed. North of Pemberton, some residents around Skookumchuck were evacuated to Pemberton by helicopter.

Within the Pemberton Valley, a Friday afternoon community effort to shore up a dike behind the Van Loon property attempted to mitigate the damage caused by the flood. Approximately 100 people reportedly came out to fill sandbags. Their success was limited, however, as the dike was breached a few kilometres north of the work, flooding fields and homes and ruining potato crops.

Compared to other areas of the Sea to Sky, the flooding would appear to have caused relatively little destruction in Whistler, mainly due to the community effort to keep Fitzsimmons Creek in its channel.

Through the evening of Thursday and Friday, local contractors, excavators and heavy equipment crews worked to shore up the banks of Fitzsimmons Creek and keep the waters out of Whistler Village and White Gold. According to Tony Evans, public safety director at the time, "If we hadn't had that, we could have made Britannia Beach look like a walk in the park."

As it was, the high waters and debris in the creek took out two supports of the Nancy Greene Drive bridge, partially washed out two footbridges linking the village and Benchlands, and destroyed Fitzsimmons Creek Park. The flooding also damaged sewer pipes and interrupted water supplies to White Gold.

At this time 28 years ago, Whistler and the surrounding communities were just beginning their clean-up efforts as the waters receded. It would take weeks to clear debris, assess damages, rebuild bridges, and construct measures to prevent future flooding, such as deepening Fitzsimmons Creek. Some of these measures can still be seen while walking across Fitzsimmons Creek today.