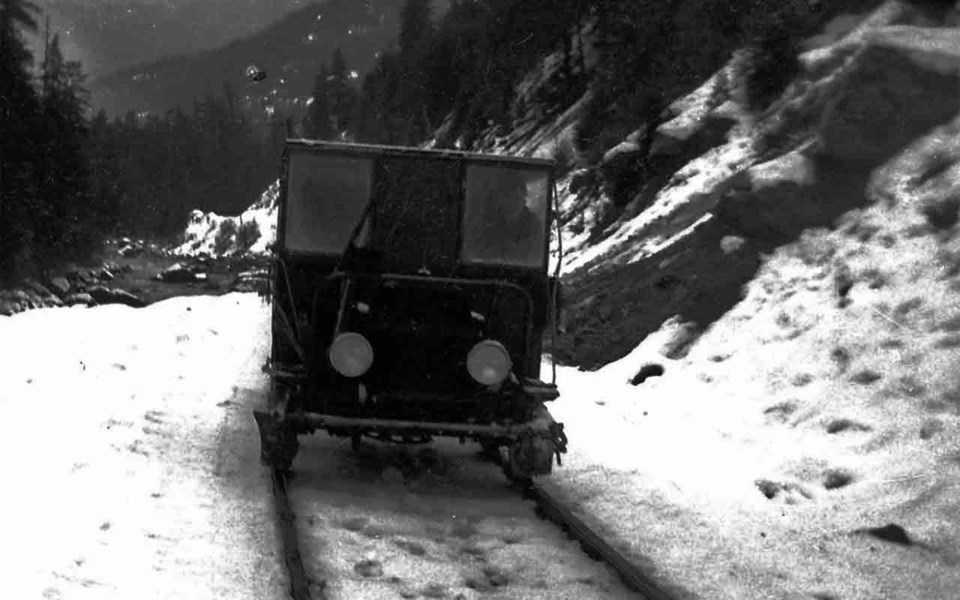 TRACK SPEEDERS Speeder cars on the PGE Railway in the 1920s or ‘30s, like this one, helped put out fires behind trains, but also rushed people to hospital when the need arose. The Jardine/Betts/Smith Collection

Transportation in the Whistler Valley takes many different forms; people walk, bike, rollerblade, skateboard, bus, drive and even ski in some seasons from one place to another. In the early 20th century, Alta Lake residents had another way to get around the area: the railroad.

Speeders—maintenance vehicles used by inspectors, work crews and other employees to travel along the track—are often mentioned in oral histories of Alta Lake. Speeders could be dangerous (in 1918, John Jardine was working for the Pacific Great Easter Railway [PGE] when he was killed after the speeder he was riding on collided with a train), but they could also be very convenient. In the 1950s, when there was still no easy road access to Alta Lake, those with speeders were some of the first to be called in the event of an emergency, such as when a section foreman and his speeder were called on to transport Marianne Golnick, who was in labour, to the hospital in Squamish.

Eugene Jordan, the son of Russ Jordan, who operated Jordan’s Lodge on Nita Lake, spent some summers living at Nita Lake with his wife Lorraine and their children while he worked in fire suppression for the BC Forest Service. Fire suppression meant following the train on a speeder and putting out any fires found along the way. According to Lorraine, “There were quite a few fires, you know. People would throw a cigarette out. And the trains used to themselves; the brakes would give off sparks and start fires.”

Fire suppression also brought Walt Punnett to the valley in 1947. Walt had served in the navy during the Second World War and after being discharged began working with the BC Forest Service. Like Eugene, Walt used a speeder to follow trains on the PGE as a “spark-chaser.”  He was stationed at Mile 83 (today known as Devine), but his section extended south to the Alta Lake Station and he would sometimes be entertained by Alex Philip at Rainbow Lodge in between runs.

Walt explained that he and his partner would wait 10 or 15 minutes before following after the train, as “by that time if there was gonna be anything, a fire, it would have got started but not had time to do any damage.” Most of the fires would start in rotten ties and could be smelled while passing. According to Walt, the summer of 1947 was a quiet fire season, meaning the worst part of the job was filling out paperwork, which all had to be done, by hand, in triplicate.

Despite a quiet summer, Walt’s last day of work for the Forest Service demonstrated both the danger and the convenience of speeders. A millworker had run his fingertips through an edger and the fastest means of transportation to reach medical care was by speeder. Walt phoned Squamish to find out what trains were running that day and the pair set out. Only one freight train was expected and it was meant to be quite a ways off. Near Anderson Lake, however, while heading downhill and northbound, Walt rounded a bend and found the steam engine coming straight at him. The speeder was moving too fast to jump off of so Walt held onto his passenger, threw on the one-wheel brake, and at the last second, Walt and his passenger jumped off either side and watched the speeder flip high in the air.

Speeders have now largely been replaced by trucks using flanged wheels to travel along tracks, but they were an important mode of transportation for Alta Lake residents, especially in case of an emergency.

Museum Musings: Summer and races featured at the Whistler Museum
May 24, 2021 10:00 AM
Comments