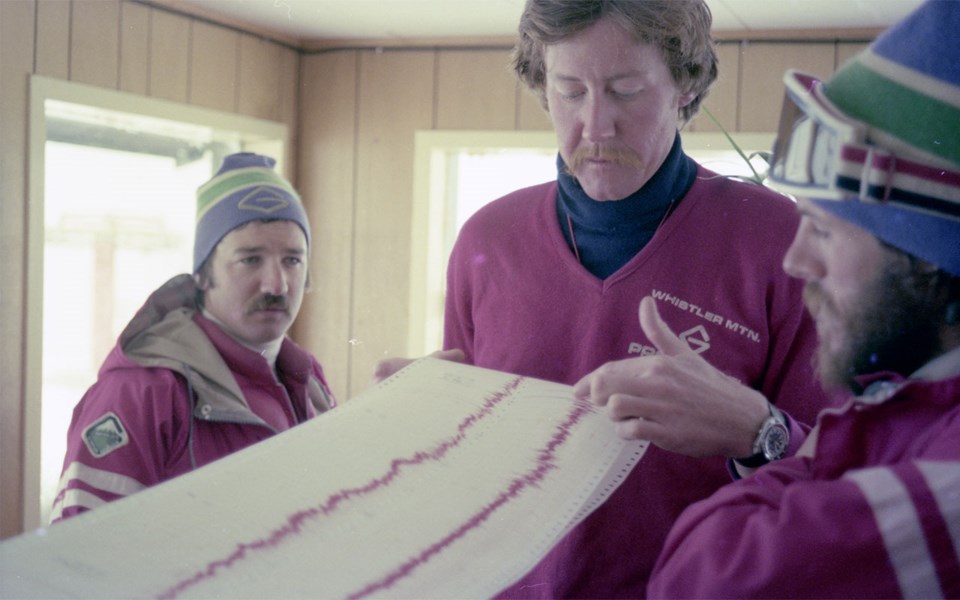 Next month, we will be opening Land of Thundering Snow, a travelling exhibit created by the Revelstoke Museum & Archives. The exhibit complements Revelstoke Museum’s virtual exhibit of the same name, which examines the history and impact of snow avalanches across Canada and we are very excited to be its first stop through March 2021.

When we think about avalanches in Whistler, one of the first things to come to mind is often the sound of avalanche control that echoes through the valley in the winter.

According to John Hetherington, who joined Whistler Mountain’s pro ski patrol for the 1967-68 season, early avalanche control was often, “putting a bunch of Forcite dynamite sticks together and going out and going, ‘I think we should throw some over here, and I think we should throw some over there.’” Over time, the patrollers learned which slopes and conditions were more likely to have an avalanche, but it was still mostly done by instinct and past experience.

In 1978, Hetherington and Chris Stethem, a former patroller then working as Whistler Mountain’s safety supervisor, wrote the “Whistler Mountain Avalanche Control Programme,” a technical memorandum, describing the methods then used by Whistler patrollers and providing an idea of a typical morning. Documents such as this are incredibly useful for learning about past procedures and the development of current practices.

Over a typical season, patrollers would use approximately 1,000 avalauncher rounds and 2,000 hand charges containing Submagel 95 per cent, a nitroglycerin explosive. Hand charges were most often used one at a time, but sometimes they were combined into doubles or triples in “special circumstances.” For control purposes, Whistler Mountain was divided into three sections, Zones A, B and C. The zones would be covered by teams of two using their own knowledge of the area and radios to communicate.

On a typical control day, 7 a.m. would see 10 to 12 patrollers heading up Whistler Mountain to the Alpine Office at 1,850 metres. Along the way, weather data, snowfall readings and wind readings were taken. Once at the alpine office, one patroller would take weather readings while the others would begin preparing the day’s charges. The patrol leader would make an initial evaluation of the avalanche hazard and decide on the control measures.

On an average day, three hand-charge teams and one avalanche gun team would be sent out by 8 a.m. to cover Zone A. A second gun team would then head out to clear the more inaccessible slopes of Zones B and C. Radios would be used to update other teams and allow the plan to be adjusted. If all went according to plan, Zone A would usually be open by 8:45 a.m. when the first skiers were reaching the upper mountain.

On days when helicopters were used, eight patrollers would control Zone A while three patrollers controlled Zones B and C from the air. The helicopter was not, however, without its shortcomings. Helicopter use was limited by the weather and reportedly eliminated the “feel” for the snow that teams learned while hiking.

Avalanche control is only one focus of the virtual Land of Thundering Snow exhibit, but it is one with which many are familiar in Whistler. Though we will not be able to host an opening event, we hope to see many of you (from a distance and a few at a time) at the physical exhibit over the winter.