Living in a place with such a beautiful landscape, where people spend a lot of time enjoying activities outdoors, environmental concerns are always relevant.
May 10, 2020 1:30 AM By: Paige Vonk 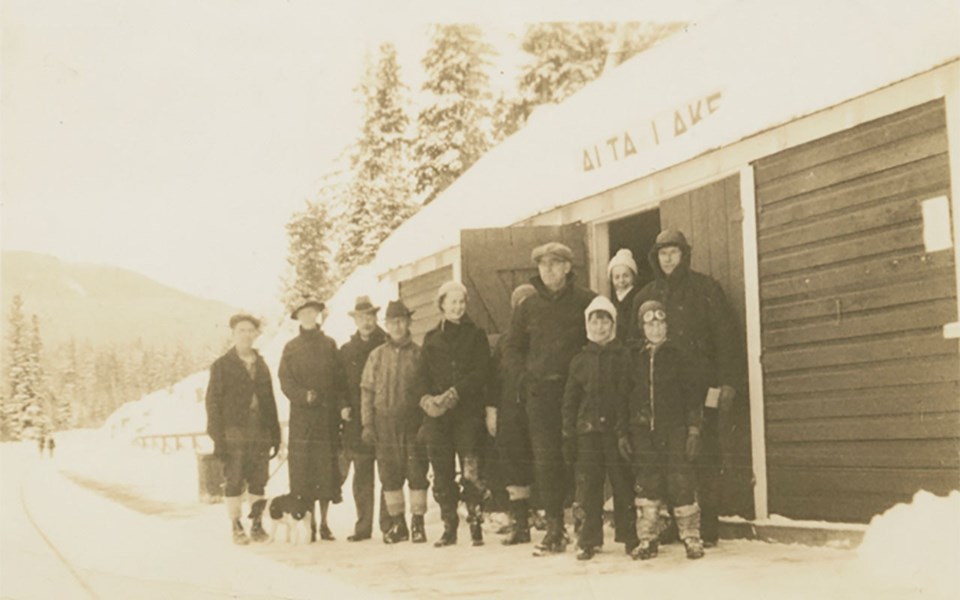 EARLY ENVIRONMENTALIST Bill Bailiff (far left) waits for the train at the Alta Lake Station with a group in 1937. As a contributor to the local Alta Lake newsletter, he often wrote on environmental topics. Clarke Collection

Living in a place with such a beautiful landscape, where people spend a lot of time enjoying activities outdoors, environmental concerns are always relevant. One of the first Whistler residents to voice concern for the environment was Bill Bailiff back in the 1950s.

John William Bailiff moved to Alta Lake from England and lived in the area for 45 years. Reportedly, his fiancée died, leaving him heartbroken, so he picked up and moved from the U.K. to British Columbia. Bailiff joined a construction crew for the Pacific Great Eastern Railway, but in 1913, he had an argument with the foreman over the safety conditions of his work and ended up quitting. He then moved to settle at Alta Lake permanently.

Bailiff kept a whitewashed log cabin near Mons Creek and Alta Lake, as well as additional shelters at each end of Cheakamus Lake. He became an excellent trapper and would spend five weeks at a time out in the wilderness. He also had trap lines in the Spearhead Range and Callaghan Creek areas that he tended to over the winters, snowshoeing between them. The traps would catch wolverine, mink, marten, lynx, and weasel. One continual nuisance was the squirrels that continued to get caught in his traps. In 1928, Bailiff caught 28 squirrels, so he froze them and stored them in his woodshed, where they were stolen by a marten and then hidden in a rockslide.

Bailiff spent the summers putting in railway ties and clearing trails around the lakes for the government. He was also a prospector, looking for copper on the Fitzsimmons side of Whistler Mountain. He and Bill MacDermott were looking for a vein that ran north from Britannia but, despite years of looking, they were never successful.

Surviving on subsistence living, Bailiff used any food available. He was known to make the best bread using potato water, and Pip Brock, whose family had property on Alta Lake, said he enjoyed his time with Bailiff "sharing his bottled beer and Blue Jay pie."

Bailiff was often chosen to be Santa Claus at school Christmas parties and the descriptions people remember him by explain why he was a clear choice for that position. Brock said Bailiff "had a large belly which shook when he laughed," and he was also described as a gentle man with round rosy cheeks.

An active member of the Alta Lake Community Club (ALCC) and even president in 1958, Bailiff wrote an ongoing series about the history of Alta Lake and preserving the environment in the ALCC newsletter. He dedicated his column, which included pieces on geography, forestry, topography and more, to the one-room Alta Lake School.

While describing the topography of the area, Bailiff wrote that, "Before the advent of the Pacific Great Eastern [Railway] in 1914 the only access to [Alta Lake] was by pack horse trail, which ran from Squamish to Pemberton through a virgin forest of magnificent timber as yet unspoiled by human hands." In the next issue, when discussing progress in the area, he described how the construction of the railway led to the "first despoilation (sic) of the forest." He also talked about the Hemlock Looper and other insects that attacked the local trees in the early 20th century, the dangers of human-caused fires in the area (including a fire by Green Lake supposedly started by a cigarette butt "thrown carelessly into dry slash"), and the decrease in wildlife sightings as human activity began to destroy habitats.

Although he spent a lot of time on his own in the wilderness, Bailiff was a well-known and well-liked member of the Alta Lake community until his death later in 1958.