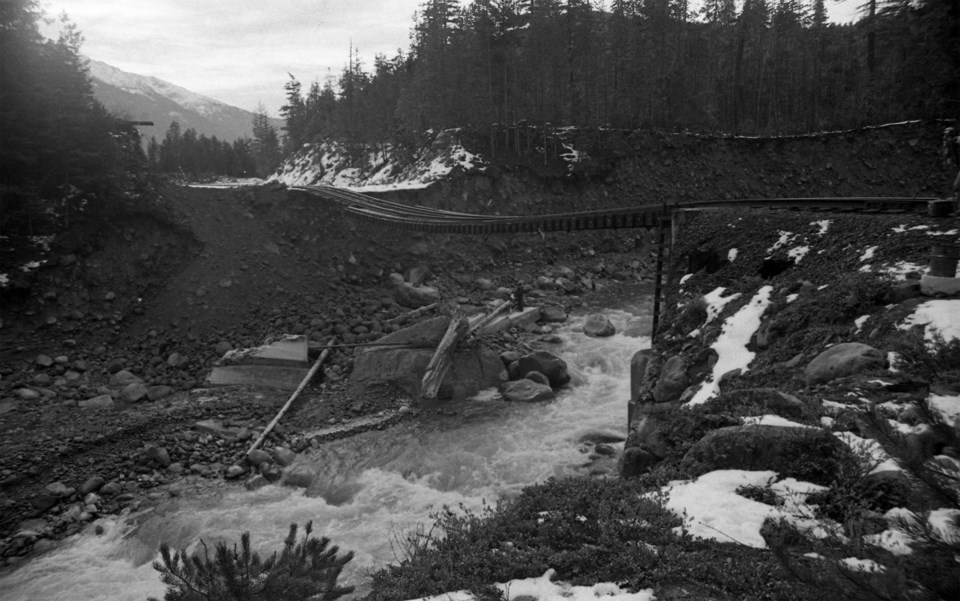 The rain of the winter of 1980-81 did damage to more than just the snow. Bridges, including the rail bridge over Rutherford Creek, were washed away. Photo from the Whistler Question Collection, 1980

Back in September, Whistler Museum posted a series of photos on social media picturing some of the activity taking place on Blackcomb Mountain as they prepared to open for their first season in December 1980.

One comment made on the photos made clear that their first season wasn’t necessarily all that Blackcomb had hoped it would be, pointing out “it didn’t snow.”

Unfortunately for Whistler and Blackcomb mountains, this was true for most of the early winter season.

The 1980-81 season didn’t start out too badly. On Dec. 4, when Pat Carleton cut the ribbon on Lift 2 with a chainsaw, there was snow in the valley and the weather looked promising.

All four of the new triple chairs to reach the top of Blackcomb were operating and skiers were able to end their day with a piece of the five-metre cake and draw prizes.

According to Hugh Smythe, the mountain enjoyed “phenomenal skiing for three weeks” and then it started to rain.

The Whistler Question reported that it began raining in the region on Dec. 24, 1980, and it was still raining towards the end of January 1981. Sections of the highway between Whistler and Squamish were washed out by heavy rains twice in that period, first on Dec. 26 and again on Jan. 21, cutting Whistler and Pemberton off from the Lower Mainland except by train or helicopter.

Within Whistler, Alpine Meadows was cut off from the rest of the town when 19 Mile Creek flooded its banks. All this rain might not have been too terrible for the ski season, except that the rain was accompanied by unseasonably warm temperatures (at one point in January, the temperature in Whistler was recorded as 5 C).

The holiday season, usually one of the busiest times of year in Whistler, saw only 20 per cent of its usual volume. Blackcomb employees delivered newsletters throughout the subdivisions in the valley to let people know that Blackcomb Mountain was open for skiing but bad press coverage of the weather did not encourage skiers to visit.

Whistler Mountain was able to continue operating (or, some might say “limped along”) through January, but Blackcomb shut down operations and laid off staff temporarily because there was not enough snow to get skiers up to Lift 4 and Lift 3 was not designed for downloading.

Blackcomb tried grooming the runs on Lift 4 and moving snow onto the road that led to the top of Lift 2, enabling skiers to ski down to the bottom of Lift 3 before downloading.

They even borrowed snow-making equipment from Grouse Mountain, which reportedly did not open at all that season, but the warm temperatures made it impossible to keep or make enough snow.

Blackcomb Mountain was able to reopen later in the season and by March, there was consistently snow on the mountains. Blackcomb has gone on to operate for 39 successful seasons and, this December, will celebrate its 40th anniversary (fingers crossed, without the rain).