A while ago the museum received a donation of a scrapbook from the Fairmont Chateau detailing the construction and opening of what is still Whistler's largest hotel.
Jul 30, 2019 12:30 AM By: Allyn Pringle 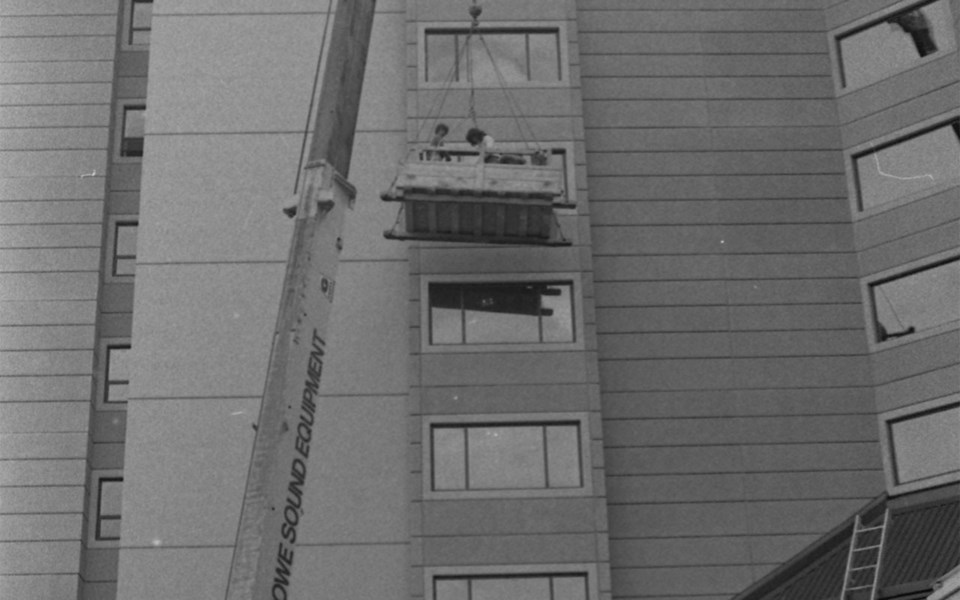 THE MOUNTAINS GET AN INN The windows of the Mountain Inn are cleaned in preparation for opening day July 23, 1982. Whistler Question Collection, 1982

A while ago the museum received a donation of a scrapbook from the Fairmont Chateau detailing the construction and opening of what is still Whistler's largest hotel. Before the Chateau, however, another big hotel built in Whistler opened July 23, 1982: the Delta Mountain Inn.

The planning process for the Mountain Inn began 40 years ago as Whistler Village was just beginning to take shape. The hotel was the dream of Peter Gregory of Maple Leaf Developments Ltd., the owners and developers of the property. Gregory's previous experience lay mostly in the lumber and sawmill industry and the Mountain Inn was his first foray into the hotel industry.

The foundations for this $25 million project were poured in 1980, while Gregory was still selling the idea to Delta Hotels. The brand was initially skeptical about the project because of the strata title ownership structure of most hotels in Whistler. Delta was concerned the restricted use of the unit owners would disrupt the smooth operation of a hotel but were convinced to come on board over the course of two years.

In the spring of 1982, when the Delta Mountain Inn was nearing completion, the Whistler Question reported the project to be the "largest building ever constructed at Whistler." The building included retail space, five conference rooms, ski storage, tennis courts, two whirlpools, an exercise room, an outdoor swimming pool, a restaurant named Twigs, an "entertainment lounge" called Stumps, and more than 160 hotel suites.

The suites were categorized into three different layouts. The A suites consisted of a single room with kitchen, living and sleeping areas; B suites included a separate bedroom and two-metre jacuzzi; nine C suites featured a bedroom, separate dining area, two fireplaces, and a double jacuzzi. One owner paid $600,000 for the creation of a D suite, a 260 square metre combination of a B and a C suite with a few walls removed.

John Pope, the Mountain Inn's first general manager, described opening a new hotel as similar to a ship's maiden voyage. The first few weeks are full of learning experiences and then it is "full steam ahead." Over the spring and summer of 1982, Pope had the task of hiring and training a full staff to service the hotel and the customers who had already booked nights. Staff from other Delta hotels were to be loaned to the Mountain Inn for the first week of operations, but after that they were on their own.

Though the opening of the Delta Mountain Inn was counted as a great success, the summer of 1982 was not the easiest time for Whistler. The opening took place the same week that the sudden wind down of the Whistler Village Land Co. made headlines in Vancouver, headlines that would reportedly "make one think the gates to Whistler have been locked forever and someone has thrown away the key." Whistler was feeling the effects of an international recession, including high interest rates, inflation and high rates of unemployment across Canada.

Despite the timing, people in Whistler were optimistic. When asked by the Question what they thought of the opening, local residents Lance Fletcher, Keith Inkster and Don Beverley all expected the convention facilities and nationally known name to help drive business to the resort. Their expectations proved correct over the following years and in 1987 a $13 million second phase of the development was built, including 126 more suites, new tennis courts and expanded retail and commercial space. This expansion completed the structure that is such a familiar view in Mountain Square today.