Cooking with the museum

Earlier this month, the museum posted a photo on its Instagram account of a page from Whistler Recipes , a cookbook published by the Whistler Museum & Archives Society in 1997.
Jun 21, 2020 12:40 AM By: Allyn Pringle 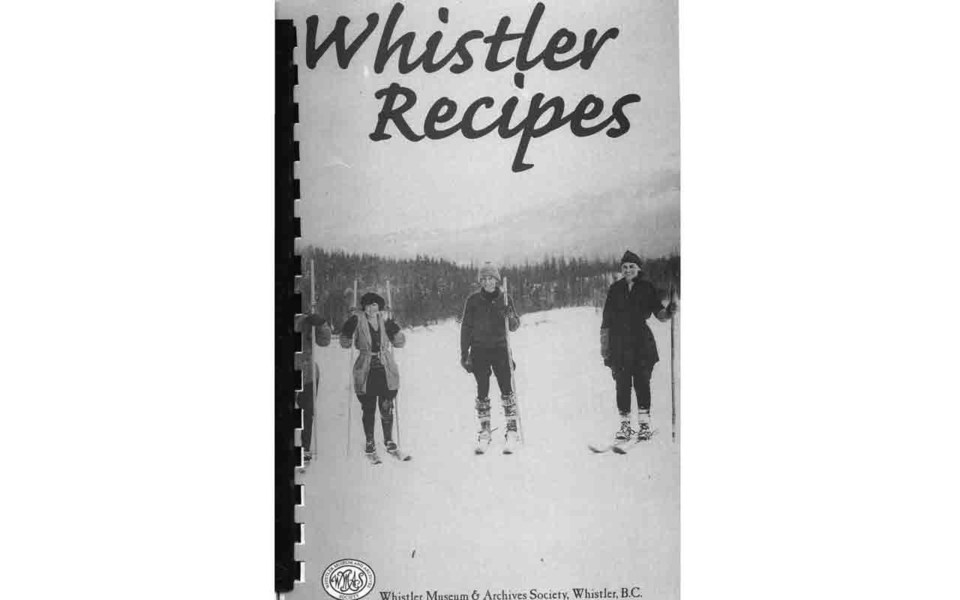 Earlier this month, the museum posted a photo on its Instagram account of a page from Whistler Recipes, a cookbook published by the Whistler Museum & Archives Society in 1997. The book contains recipes gathered from past and (at the time), present residents of Whistler and Alta Lake, as well as a few scattered recipes from a 1940 cookbook published by The Vancouver Sun. Recipes such as "Myrtle's Muffins" from Myrtle Philip, who was one of the original proprietors of Rainbow Lodge in 1914, are found along with instructions for making Yorkshire puddings from Ann Bright, whose family moved to the area when her husband Jack Bright began working as the general manager of Whistler Mountain in the 1960s.

It is easy to tell that some of the recipes have been handed down from friends or family, with specific names attached to contributions such as "Mrs. Noble's Blueberry Muffins" and measurements you wouldn't necessarily see written in more formal cookbooks. The best example of this comes from "Granny Cosgrave's Scones" submitted by J'Anne Greenwood, which called for "1 lump butter, the size of a small egg."

Mabel Cosgrave first visited Alta Lake in 1923 when she, her eight-year-old-daughter Sala, and her mother Judith "Mimi" Forster-Coull stayed at Rainbow Lodge. The family returned the next summer and, in 1925, Mabel bought a lot on Alta Lake and hired Bert Harrop to construct a cabin. After Mabel and Sala moved from Seattle to Vancouver, they were able to use their Alta Lake cabin quite often in all seasons.

Sala's daughter J'Anne Greenwood visited Alta Lake for the first time at just six months old in 1940. Sala and her family had been living in Winnipeg, where her husband was in the RCMP, but after he joined the army and was sent overseas, Mabel, Sala and J'Anne decided to live at the Alta Lake cabin full-time.

Over the summers of 1943 and 1944, they ran a tearoom out of the cabin (possibly even serving the same scone recipe). Sala did the cooking while Mabel read tea leaves for those who wished. In 1944, Sala bought two lots of her own on Alta Lake, paying Charlie Chandler a total of $800, in anticipation of her husband's return from war. Sadly, he was killed while still overseas.

One of the lots had a cabin built in the 1930s and Dick Fairhurst and his brother built an additional wing to be used as a tearoom in 1945. That same year, however, Mabel, Sala, and J'Anne moved back to Vancouver, in part for J'Anne to attend school as the Alta Lake School had closed. The family continues to spend time at the cabin regularly.

When the Philips retired and sold Rainbow Lodge in 1948, Myrtle Philip bought Mabel Cosgrave's original cabin and owned it until her death at the age of 95 in 1986. The cabin on Sala's lot stood until 1989, when the Greenwood family decided to build a new house. Like many other buildings from that period, the original cabin was offered to the fire department, who burned it down as part of fire practice.

Recipes and the people who share them can offer far more information than just what people like to eat and so we love that Whistler Recipes includes names for each contributor. Keep an eye on our social media for more recipes and results from Whistler Recipes (we tried making Elaine Wallace's Lemon Loaves and can confirm that they are delicious) throughout June and, if you happen to have a copy, let us know what your favourites are!