When going through accounts of life at Parkhurst one name that keeps coming up is Denis DeBeck. The eldest of six siblings, he worked alongside two of his younger brothers, Ward and Keary, for a few summers at Parkhurst.
Jul 18, 2018 6:00 PM By: Allyn Pringle 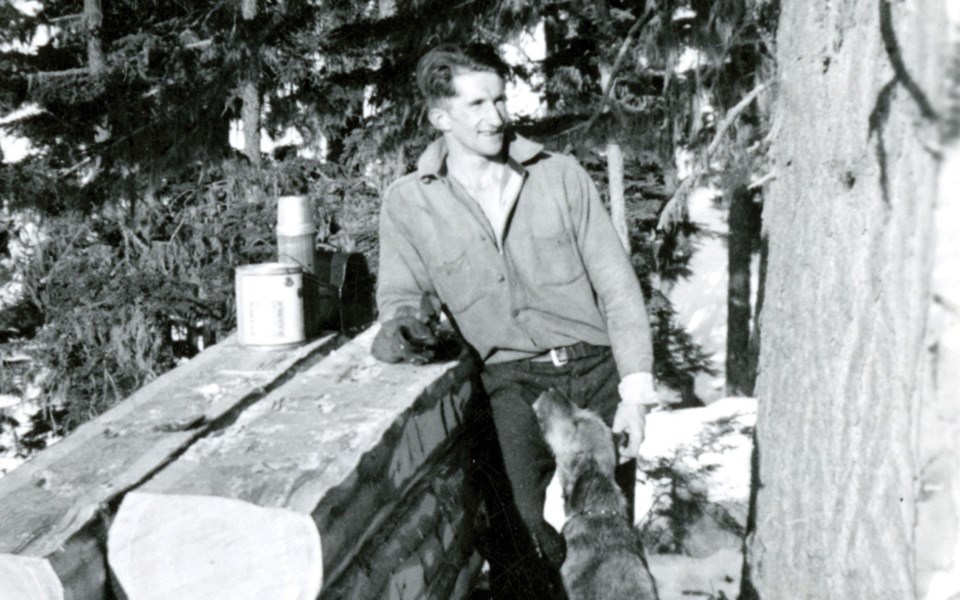 HISTORY THROUGH LETTERS Denis DeBeck's letters about life while working at Parkhurst and beyond give us a unique glimpse into logging in the early-to mid-1940s. Here, he is pictured with his dog Micky. Photo courtesy of the DeBeck Collection

When going through accounts of life at Parkhurst one name that keeps coming up is Denis DeBeck.

The eldest of six siblings, he worked alongside two of his younger brothers, Ward and Keary, for a few summers at Parkhurst. It was during those years that their mother brought the younger three children, Betsy, Nedra and Fred, to stay on Green Lake as well.

The DeBecks came from the Marpole neighbourhood of Vancouver where the children all attended school. Denis graduated from Magee High School in 1928 and got his first job at Coast Quarries. Over the next few years, he worked various jobs, including a stint as his father's office boy.

In 1932 he began working for B.C. Keeley (who bought Parkhurst in 1933) at his mill in Marpole. A year later, Denis was on the train bound for Parkhurst (in a snowstorm, according to his letters) where he would work on and off for the next five years. During these years he married Dorothy, a friend of his cousin Barbara. After the original mill burnt down in 1938, the DeBecks left Parkhurst and in 1940, Denis and his partner John Brunzen opened their own small portable mill at 43.5 Mile on the PGE Railway. This was also the year Denis and Dorothy had their first daughter, Wilma. Their second, Barbara May, came after they moved the mill to 48.8 Mile.

We are fortunate at the museum to have copies of letters written by Denis to his brother Keary between 1943 and 1944, when Keary was serving in the RCAF overseas.

The letters provide a glimpse into life in British Columbia during the Second World War and into the DeBeck family. Denis provided his brother with family news and commented on the updates Keary sent about their brother Fred who was recovering from a plane crash. When Fred returned to Canada, their roles switched and Denis provided the updates. While living at 48.8 Mile, the DeBeck family appears to have communicated often through letters and visits, described once by Denis as "a three week raid on Victoria" where their parents had moved.

Denis also sent his brother news of the mills in the area in his first few letters. By November 1943, he was already looking for the next location for his portable mill, expecting to finish the timber at 48.8 Mile by the next April. Locations mentioned were Nita Lake, D'Arcy and Squamish.

From his news, mills did not appear to be having the best year. As Denis put it, "Poor old Parkhurst. Same old story, out of logs. They are only running a seven hour day and still run out of logs."

There was also trouble with logs at Lost Lake and for the Gebhart's mill.

In a letter from March 1944, Denis describes the new tool being used to fell the last of the timber at 48.8 Mile.

"We bought one of those power chainsaws and it works pretty good but not as well as we thought it would. Very good for falling but no good for bucking in the woods."

Despite taking awhile to start up, he claimed the sawing was "four or five times as fast as hand sawing."

Despite his predictions of moving soon, the DeBeck family was still at 48.8 Mile in October of 1944. Though the letters we have stop there, they moved to Squamish in 1945 and Denis continued to operate his own sawmills. He lived there until his death in 2007 at the age of 96.