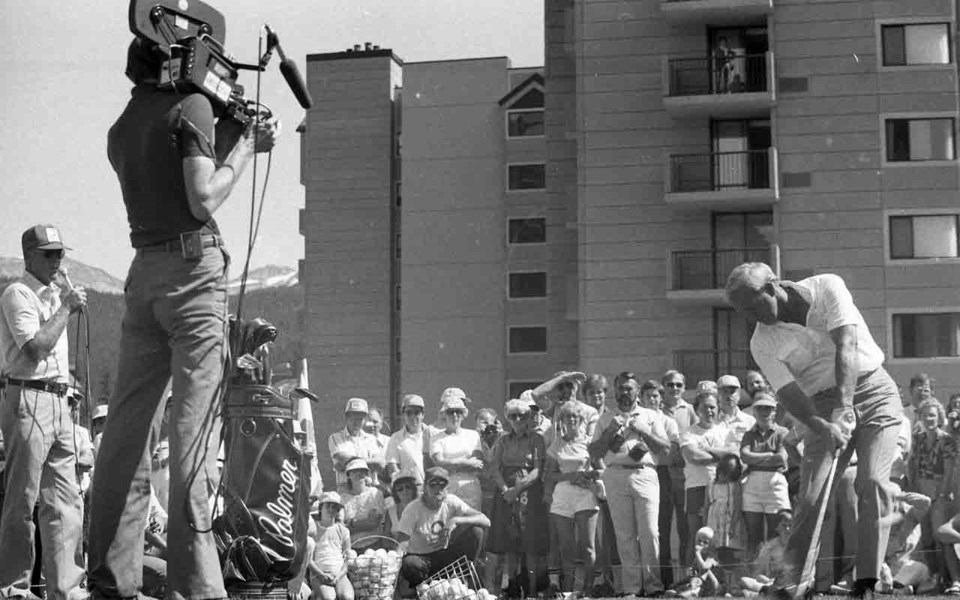 HOLE IN ONE Arnold Palmer takes a swing at the official opening of the Whistler Golf Club. Whistler Question Collection, 1983

In August 1983, Arnold Palmer opened the first golf course in Canada designed by him. Palmer posed with buckets of golf balls and was photographed mid-swing surrounded by a crowd of people. This was the official opening of the Whistler Golf Club as we know it today.

The Whistler Golf Club got its start in 1973, when Bob Bishop and Bernie Brown, the developers of Whistler Cay, began developing an executive-sized nine-hole course near Beaver Lane. When completed just a few years later, Whistler residents and visitors were able to play a round without driving to Squamish (the Squamish Valley course was the first golf course to open in the corridor in 1967). A temporary pro shop at the new course carried a full range of rental clubs, balls, tees, gloves and other accessories, including caps emblazoned with the course crest: a beaver. According to Bishop and Brown, the beavers were “the original course engineers who created this land.”

By 1976, the course had started to host small informal tournaments, both in summer and in winter. For the course’s first official opening, Bishop had planned to host a New Year’s Day tournament. The plan was for golfers to wear either skis or snowshoes and use golf clubs to hit softballs towards garbage can targets. Though we do not know if this particular tournament went ahead, there are reports of similar tournaments being played in 1975 to raise money for Whistler Search and Rescue. Golfers were on skis, and hit red tennis balls into buckets sunk in the snow to make holes.

In 1977, Bishop and Brown announced their plans to expand the small nine-hole course to a full-size, 18-hole course. That summer, they began the preliminary clearing, draining, surveying and planning for the course, which was to be designed by Gordie McKay, the golf professional and superintendent in Squamish. Because of a short construction season, they estimated it would be at least four years before the full course would be finished. In the meantime, the smaller course would be improved and kept open.

The expansion of the golf course became a key part in the plans for the development of a Town Centre and the transformation of Whistler into a year-round destination resort and was taken over by the Whistler Village Land Company (WVLC) by 1979. Palmer chose to make the golf course the site of his first Canadian design, with Gordie McKay staying on as the Canadian consultant for the course. The clubhouse and shop, along with a hockey rink and swimming pool, were to be incorporated into the planned Resort Centre (today the Whistler Conference Centre). In September 1981, the golf course received its final inspection by Palmer and looked to be on track to open for the summer of 1982.

This opening was delayed when Whistler, along with the rest of North America, was hit by a major recession in late 1981. Real estate sales fell and interest rates climbed above 20 per cent, leaving the WVLC with debts of almost $8 million, liabilities around $30 million, and land assets that nobody wanted to buy. Whistler Land Co. Developments, a Crown corporation, was formed in January 1983 to take over the liabilities and assets of the WVLC, including the golf course.

Under the Whistler Land Co., the full Whistler Golf Club was completed. It was ready for Palmer’s opening round in August 1983.