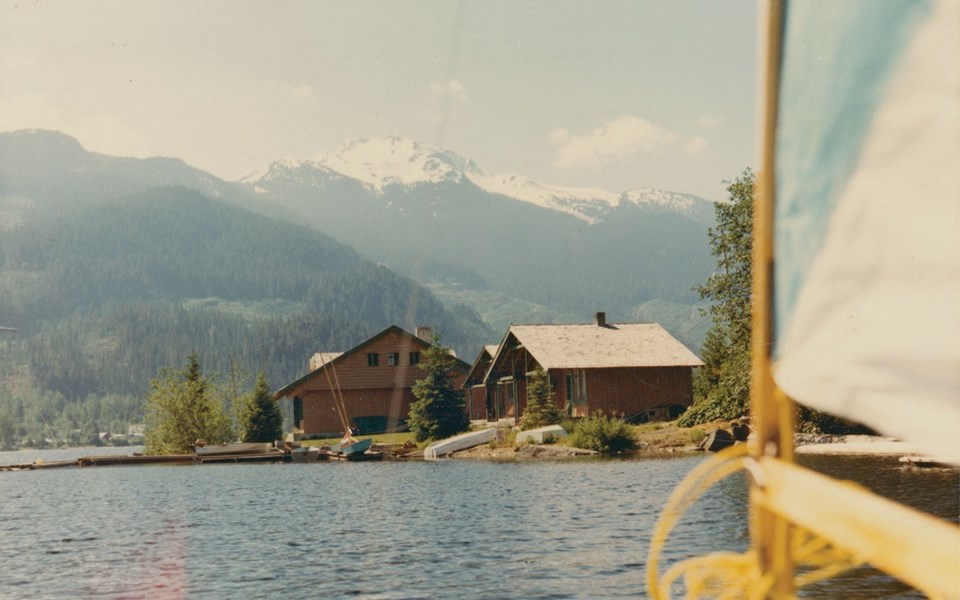 BUILDING COMMUNITY Dick Fairhurst helped build the fabric of what would become Whistler, constructing Cypress Point at Alta Lake and so much more. Fairhurst Collection

This week, we're continuing the story of Dick Fairhurst, who first came to Alta Lake in 1943. By 1955, he owned three adjoining lots on Alta Lake, including the property today known as The Point, and was operating a collection of cabins and a tearoom under the name Cypress Lodge.

At Cypress Lodge, guests could participate in many activities, including fishing, hiking, berry picking, and picnics, as well as community events in the summer such as movies and dances. Luckily, Dick did not have to run the entire business by himself while continuing to work on his traplines and in forestry.

In the summer of 1955, his mother Elizabeth Alice Fairhurst came up from Vancouver to run the tearoom for him. She also looked after the cabins, did the laundry, and cooked for guests, running what others would describe as "a tight ship." Though she originally came for just one season, she stayed for 15 years. Dick added a bedroom to his house on the property and enlarged the kitchen, ensuring his mother would be comfortable at Alta Lake.

Dick also had some new neighbours move in that summer when a group of teachers from the Lower Mainland bought the Masson house. June Tidball, Florence Strachan, Eunice "Kelly" Forster, Jacquie Pope, and Betty Gray became regular Alta Lake visitors and rechristened their cabin "Witsend." Dick brought them hot water on their first evening at the cabin to welcome them to Alta Lake and became a trusted friend of the group.

Dick and Kelly Forster (the same Kelly who once sewed her friends' pajamas shut) married in 1958 and Kelly moved to Alta Lake full-time, becoming involved in the running of Cypress Lodge. The pair made a plan to replace the old cabins on the waterfront and build a lodge building. They began by clearing the point and constructing new cabins, completing four by 1962. These cabins had the distinction of housing the first coloured plumbing at Alta Lake, though sadly we do not know what colour their plumbing was.

In February 1963, apparently not an incredibly snowy winter, the Fairhursts laid the forms for the foundation of their new lodge. Fully booked for the 1965 Victoria Day long weekend, Cypress Lodge was finished just in time, with the furniture arriving on the Saturday and assembled by friends, neighbours, and even guests.

Along with the lodge, the Fairhurst family had grown during these years. Dick and Kelly had two children, David and Carol, who attended the Alta Lake School.

Cypress Lodge became a gathering place for the small Alta Lake community through the 1950s, '60s and '70s. The wharf was the base for the Alta Lake Sailing Club's Dominion Day Derby on July 1 and the annual Regretta (named for the "regret" at the season ending) on Labour Day, where events such as pie-eating contests and a fish fry took place alongside boat races. In the winter, Dick and Kelly would also open the lodge for New Year's Eve parties.

The Fairhursts continued to operate Cypress Lodge, renting cabins out to Whistler Mountain employees and highway crews, until 1972 when they sold the property to the Canadian Youth Hostels Association. In 1973, they moved into their new home built by Andy Petersen on Drifter Way, where they stayed until both David and Carol had graduated from high school in Pemberton. In 1980, Dick and Kelly moved into a house Dick had built for them in Parksville, where Dick took up golfing, salt-water fishing, and gardening. Sadly, Dick died in October 1983.

He is remembered for many things in Whistler in addition to Cypress Lodge, as he also helped found the Black Tusk Snowmobile Club, maintained the dump site with the Valleau logging family, served as the Fire Chief for the volunteer force, put the barrel out on the lake for the Alta Lake Community Club's Ice Derby, and was named Citizen of the Year in 1972.

For other stories about Fairhurst, go to piquenewsmagazine.com and look for Museum Museums under the Features & Images tab.