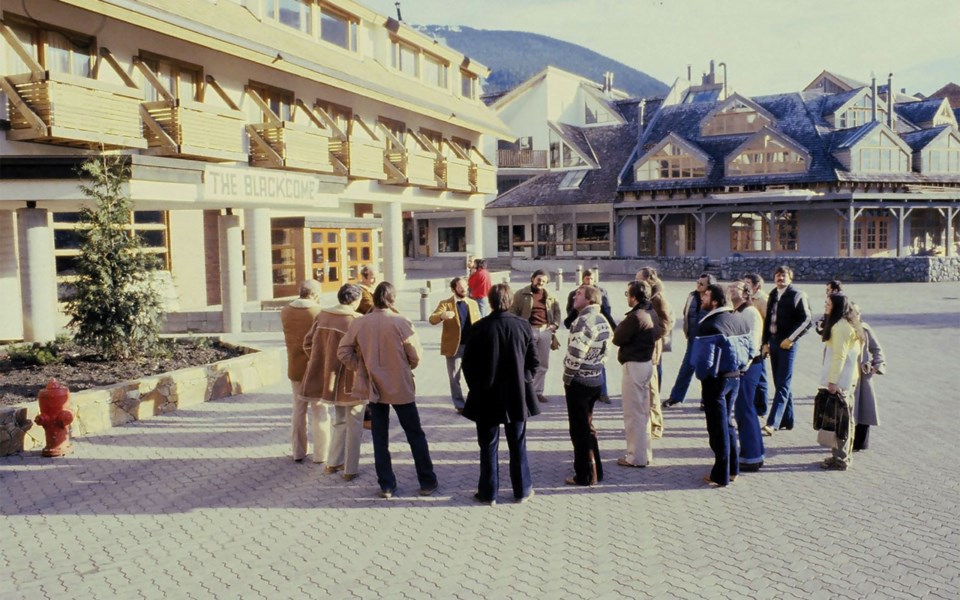 TAKING THE STROLL Landscape architect Eldon Beck explains his design of the village to a group of onlookers. Eldon Beck Collection

It is a commonly-held belief that Whistler would be very different today if it were not for the influence of Eldon Beck. A trained landscape architect from California, Beck is often credited as the visionary behind the Whistler Village, which he began working on in 1978.

In 1972, Beck’s firm was hired by Vail, Colo. to consult on a community master plan. The plan aimed to resolve some of the community’s traffic issues and create a pedestrian-centred village. From 1972 to 1978, Beck worked with Vail as its primary consultant, a time he described as forming the bulk of his early mountain-planning experience.

By 1978, the Resort Municipality of Whistler (RMOW) had spent three years discussing, consulting, planning, and working hard on a town centre to be built on what had been the dump. The site and funding, from both the provincial and federal governments, were secured; the RMOW, however, did not yet have a final plan for the site.

Terry Minger, who had been the general manager of Vail and would become the president of the Whistler Village Land Company, introduced Beck to Al Raine, the provincial appointee to the Whistler’s municipal council. Though Beck described the existing plans for the town centre as a grid plan “like a little city,” which “felt like a mini-Vancouver,” there were parts of the council’s plans that excited him. They wanted to build a pedestrian village (the early plans included a pedestrian spine that was intersected with vehicle crossings) with lots small enough that they could be bought and developed by local developers. Beck was asked to come take a look and modify the plans, which he felt imposed a building plan on the natural environment rather than letting the land guide the plan.

Beck first arrived in Whistler in September 1978. According to him, his first impression of the area was not of the mountains but of being overwhelmed by the fragrance of the forest. It was cloudy, as can often be the case in September, and Beck had to trust Raine when he “swore up and down there were mountains.”

The weather did clear up and Beck was able to gain an idea of the site’s natural surroundings, though the site was somewhat overgrown and some of the sightlines were hard to make out. To get a good view of Fissile Peak, Beck decided to “elevate” himself, or climb as high up a tree as he could (he later claimed this blew Raine away and ensured he got the job). As he remembered it, he was then taken to someone’s garage where he was introduced to the council and asked to come up with something for their next meeting.

In the foreword to Beck’s book Edges, Raine claimed that the Village Stroll and some of the buildings of the Whistler Village began to appear on Beck’s sketchbook within the next 24 hours. His plans were presented to council three days later and quickly endorsed. What was supposed to have been a modification of the existing plans had become a wholly new design.

Beck’s visit to Whistler in 1978 was the first of many (he was most recently here last October, when he participated in a speaker event on the development of the Whistler Village) and the beginning of a longstanding relationship with a town he describes as “a happy place.”

Museum Musings: Getting ready for Blackcomb Mountain’s first season
Sep 28, 2020 10:00 AM
Comments
We welcome your feedback and encourage you to share your thoughts. We ask that you be respectful of others and their points of view, refrain from personal attacks and stay on topic. To learn about our commenting policies and how we moderate, please read our Community Guidelines.