There is an often-told story of the first meeting of Stefan Ples and Franz Wilhelmsen of Garibaldi Lifts Ltd. on Whistler Mountain. Apparently Franz arrived at the top of the mountain by helicopter to find Stefan there on skis.
May 25, 2020 9:01 AM By: Allyn Pringle 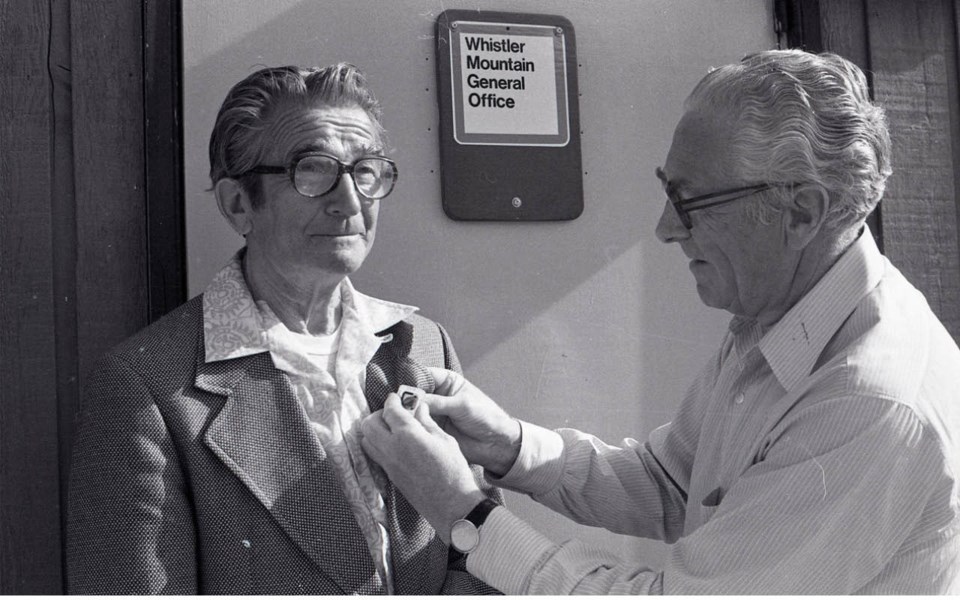 Though we do not know exactly how their first meeting occurred, the story certainly demonstrates Stefan's love of the mountain and his preferred way to navigate it. (For more information on Stefan's life before coming to Alta Lake read "Museum Musings" May 14.)

Although Stefan didn't understand why people would prefer going up on lifts and skiing only a short distance down, he became greatly involved in the development of Whistler Mountain. By the mid 1960s he had been exploring the mountain on his skis for years and knew the area perhaps better than anyone at the time. Stefan began working for the lift company in 1963, going up to Alta Lake every weekend for over a year to climb up to a meadow at the bottom of the T-bar, where he would record the temperature and the snowfall and other information (his handwritten reports were donated to the Whistler Museum & Archives by his daughter Renate in 2013).

When construction of the runs and lifts began Stefan moved up to Alta Lake full time to work. Part of his responsibilities was to bring the horses up the mountain with supplies to a work camp that was set up in what may have been the same meadows he gathered his reports from. Renate accompanied him on one of his trips up with the horses and told the museum, "It was just magical, because we went up through the forest and everything and we ended up in this meadow. Oh, it was so beautiful up there."

Though Gerda, Stefan's wife, had continued to run their rooming house in Vancouver when Stefan first started working for the lift company, the rest of the family moved up the Alta Lake in 1966.

Stefan continued working for the lift company and led ski tours to areas the lifts didn't access. One summer Renate even remembers helping him paint the top of the Red Chair. Despite working for the lift company and receiving a lifetime pass in 1980, Stefan continued to prefer walking up, occasionally taking a lift as far as midstation before beginning his climb.

According to Renate, the only person who could go up the mountain on skis faster than her father was Seppo Makinen: "It took my dad three hours, probably, to get to the peak. Seppo made it in an hour and a half. I think he actually ran, you know, on his cross-country skis, and my dad walked on his cross-country skis, but Seppo ran. He was also considerably younger than my father."

Parts of Stefan's legacy can be seen throughout the area, though many may not know of his role in creating it, from the Tyrol Lodge to the two runs off Whistler Peak that bear his name, Stefan's Chute and Stefan's Salute.

He was a founding member of the Alta Lake Volunteer Fire Department in the '60s and helped start Whistler's first Search and Rescue Team in 1973. His name can also be found on the Stefan Ples trophy, the prize for the overall winners of the Peak to Valley Race, as he liked to climb to the peak and then ski all the way down.

Though some people may come to Whistler to build a career or make it rich, Renate said of her father that, "all he wanted to do was be in the mountains," a goal it would appear he certainly accomplished.